The National Parks in Maryland map shows the exact location of main national parks and historical monuments located in the US state of Maryland. The map defines the locations in which the popular national parks of the state are situated. The map also depicts the state boundary, railway lines, Interstate and State Highways in Maryland state. The map marks the country's capital (Washington D.C) and major towns as well. A map legend featured at the bottom helps all the signs, characters graphics, and symbols used throughout the map. 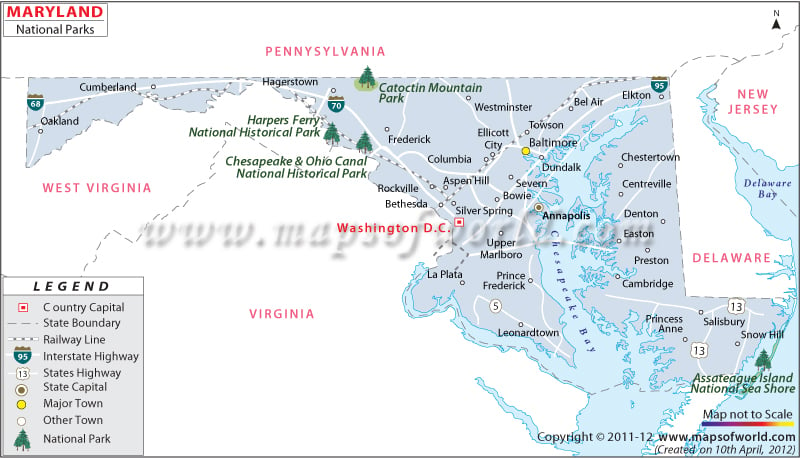 Potomac Heritage National Scenic Trail is yet another interesting spot of the state which offers exciting tourism opportunities along with bicycling and hiking. Covering a total of 341 acres the Fort Washington Park of Maryland spans over Potomac and was once built to offer protection to Washington. Thomas Stone National Historic Site and Hampton National Historic Site are among the several other national parks of Maryland.

How many National Parks in Maryland?

The National Park Service controls 24 units in the state of Maryland. They range from sites of ecological interest to portions of the parkway system around Washington, D.C. There are eight units administered by the National Park System in Maryland as a part of National Capital Parks. The most recent unit created in Maryland is the Captain John Smith Chesapeake National Historic Trail, which was authorized by Congress in 2006.

The National Parks in Maryland are popular for their strenuous activities in both summer and winter, including cross-country skiing and rock climbing. The ocean temperatures at Assateague Island are similar to Ocean City, Maryland with the best time of the year to swim is from the end of June to early September.