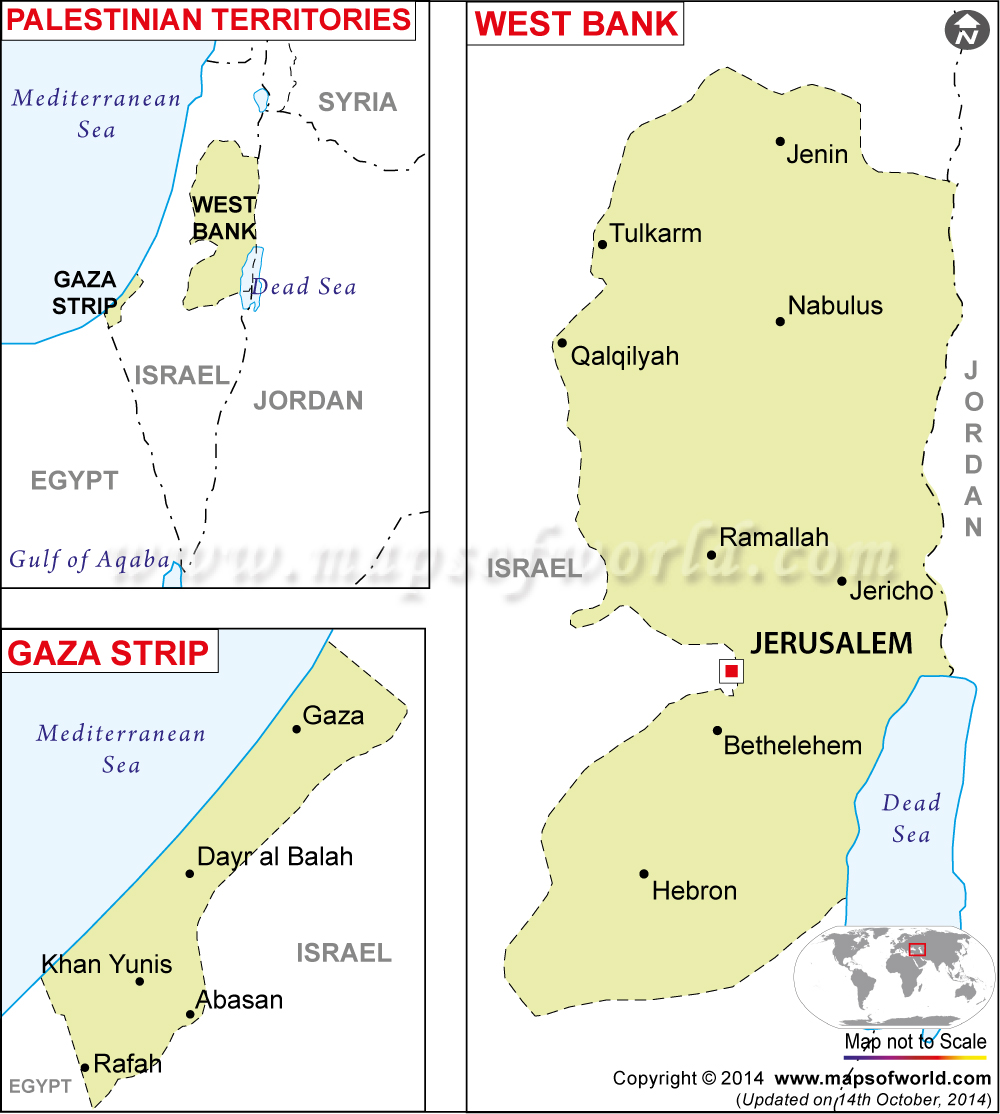 Palestine (officially, The State of Palestine) is a de jure sovereign state in Western Asia and comprises the West Bank and Gaza Strip territories. The Palestine National Council declared independence from the state of Israel on November 15, 1988. In 2012 On November 29, the “State of Palestine” was officially recognized by the United Nations as a Non-Member Observer State. As of August 2014, one hundred thirty-four nations have formally recognized Palestine as a sovereign state following the Palestinian Declaration of Independence. Palestine covers an area of about 6,020 sq. km and is officially governed by the Palestine Liberation Organization (PLO).

The Palestine location Map shows the exact location of Palestine on the world map. This map depicts the boundaries of this country, neighboring countries, and oceans. The territories of Palestine are located in Western Asia, along the Jordan River and the Mediterranean Sea consisting of Gaza Strip and West Bank. The Gaza Strip shares its boundaries with the Mediterranean Sea to the west, Israel on the East and north, and Egypt on the southwest. The West Bank shares its boundary with Israel in the north, west, and south and with Jordan and the Dead Sea in the east.

The Palestine Territories uses only a one-time zone, which is Palestine Standard Time. The time zone in Palestine is (UTC+02:00) year around. It means that Palestine is 2 hours ahead of UTC. Palestine is effectively observing permanent  Daylight Saving Time (DST), whereby clocks are advanced by one hour during the summer months (UTC+03:00).

The areas claimed by Palestine lie in the Levant. Palestine Region comprises parts of modern Israel and the Palestinian areas of the Gaza Strip (along the coast of the Mediterranean Sea) and the West Bank (west of the Jordan River). Thus, the State of Palestine has no geographical border with one another as Israel is separating them. The de jure sovereign state is geographically positioned both in the Northern and Eastern hemispheres of the earth. The terrain of the Gaza Strip in the Palestine region is flat and rolling, with dunes near the coast. The highest of the Gaza Strip is Abu Awdah at 105 m (344 ft) above sea level. The terrain of the West Bank in the Palestine region is mainly rugged dissected upland. There is some vegetation in the west, but somewhat barren in the east. The highest point of the West Bank Region is Mount Nabi Yunus at 1,030 m (3,380 ft) above sea level. The lowest point is the northern shore of the Dead Sea at 429 m (1407 ft) below sea level.

The climatic conditions of Palestine considerably vary across the state. The climatic conditions in the West Bank Region are chiefly the Mediterranean, slightly more relaxed at elevated areas compared with the shoreline, west to the area. A dry and hot climate characterizes the East or West Bank as it includes the ugh of the Judean desert. The Gaza region of Palestine has a hot semi-arid climate with mild winters and dry, hot summers.

The history of Palestine dates back from 1500 BC to 500 BC. At that time, the territory of Palestine was ruled by different small kingdoms of the Hebrews, the Canaanites, the Jebusites, the Amorites, the Phoenicians, the Samaritans, the Phoenicians, and the Philistines. Palestine was conquered by the Babylonians in 586 BC under the leadership of Nebuchadnezzar, deporting the Jewish population to Babylon. Persia conquered the kingdom of Babylon in 539 BC, which included the Palestine region, which led to the return of Jews.

Palestine became a territory of the Roman Empire in 63 BC leading to the Dispersal of Jews and Christians out of Jerusalem. In 638 AD, Muslim rule began in Palestine, and they ruled the region for the next 1300 years. The Palestine territory came under the control of the Ottoman Empire during the World War I and, subsequently, the Britishers. Britain announced the Balfour Declaration in 1917, stating that Palestine territory was a homeland of Jews, thus encouraging mass immigration of the Jewish population.

In 1947, Britain announced their termination of the mandate and left the United Nations with the decision to divide the territory of Israel. The partition of Palestine between the Jewish state and the Arab State was recommended, but it was rejected by the Arab Higher Committee and accepted by Jewish leadership resulting in a civil war. In 1948 during the Arab-Israeli War, Palestine lost its West Bank territory to Israel and the Gaza Strip to Egypt, and over 700,000 Palestinians fled the region. In 1967, Israel took control of the Gaza Strip in a six-day war. In 1987, the Palestinian uprising against an Israeli occupation started leading to the Declaration of the state of Palestine 1988.

Major cities of  Palestine are:

FAQ #1: Is Bethlehem in Israel or Palestine?

Ans. Bethlehem is a city located in the Central West Bank of Palestine, about 10 km south of Jerusalem. After the war of 1967, it was part of the Israeli-occupied territory of the West Bank.

Faq #2: Is Palestine a country?

Faq #3: What language does Palestine speak?

Ans: The primary languages of the state of Palestine are Arabic and Hebrew.

Faq #4:Who owned the land first, Israel or Palestine?

Ans: According to some, Israel predates Palestine by more than 1000 years.

Faq #5: Why are Israel and Palestine in a brutal conflict?

And: Israel Jews and Palestinian Arabs are in a brutal conflict because they want the same land. The conflict has its roots in the late 19th and early 20th centuries as both (Jews and Arabs) geared toward attaining sovereignty for their people in the Middle East.

Faq #6: When was Palestine founded?

Ans: The Declaration of the state of Palestine took place on November 15, 1988.

Faq #7: Is Jerusalem in Israel or Palestine?

Ans: Jerusalem is a City located in modern-day Israel. While Israel claims the whole of Jerusalem as its capital, and Palestine claims East Jerusalem as the capital of a future Palestinian state.

Faq#9: What religion is Palestine?

Ans: Islam is the major religion in the state of Palestine.