The Palestine Flag has three horizontal bands of color and a red arrow on the hoist side of the flag. The national flag of Palestine has a black-colored stripe on the top, and then comes the white, followed by the green stripe. 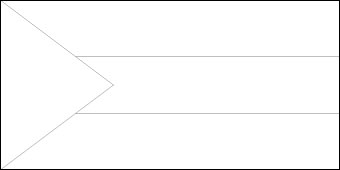 Download Picture of Palestine Flag Outline for kids to color

The current Palestinian flag was officially effective in 1964 and in 1988 the same flag was declared the flag of ‘The State of Palestine’.

The original designer of the national flag of Palestine is Sharif Hussein.

The entire Palestinian population, which is mostly composed of Arabs is represented by the national flag of Palestine.