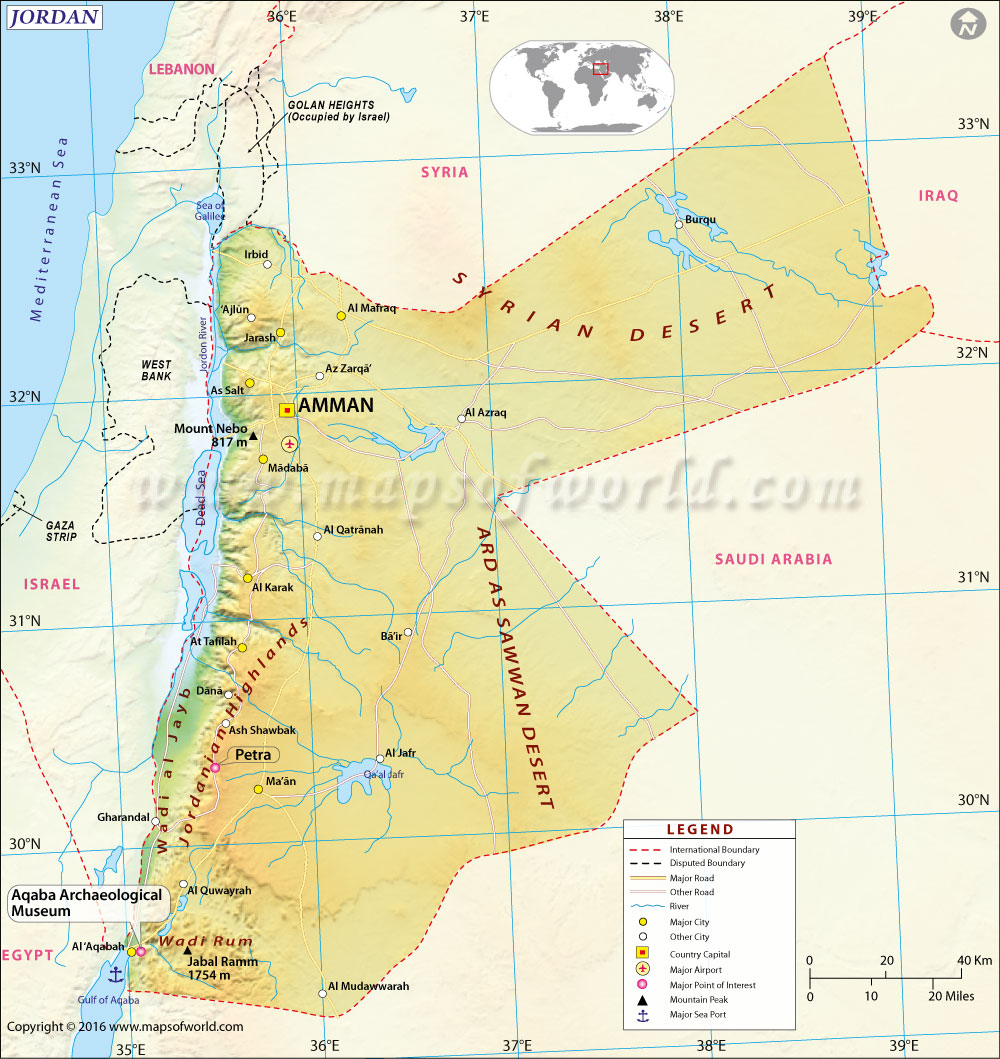 Officially called the Hashemite Kingdom of Jordan, Jordan is a country located on the east bank of the River Jordan. The Arabian Desert covers almost half of Jordan.

Over Jordan’s long history, the country has been ruled by various kingdoms, including the kingdoms of Edom, Moab, and Ammon during the Iron Age. These kingdoms existed alongside the Ancient Egyptians, Babylonians, Hittites, and Israelites, who at times faced conflict with Egypt. Many of the communities of early Jordan and surrounding areas found mention in the Bible because of its position next to Israel.

The 7th century brought the Muslim invasion, and Jordan, with its strategic location, became part of the Islamic Empire. During this period, Jordan was ruled by various Caliphates. Jordan was part of the Ottoman (Turkish) Empire from 1516 to 1918.

At the beginning of World War I, the Ottoman Empire was on the side of the Allies, fighting with the Hashemites in the Great Arab Revolt. In this rebellion, some of the territory around what is now Jordan gained independence, and the Emirate of Transjordan was formed under a British mandate. That mandate ended in 1946, and Transjordan became an independent kingdom, later changing its name to Jordan.

Jordan’s terrain is characterized by an arid plateau and deserts, broken up by some mountainous regions, valleys, and river gorges. The Jordan Rift Valley runs along the Jordanian border with Israel and Palestine, and the Jordan River flows through it. The Syrian Desert makes up part of the country, featuring sand dunes and salt flats.

The shores of the Dead Sea boasts the lowest land in the world, at 423 meters (1,388 feet) below sea level. The highest point of Jordan is located on Jabal Umm al Dami, which stands 1,854 meters (6,082 feet) above sea level.

Jordan’s biggest attraction is Petra, which is a UNESCO World Heritage Site and one of the new 7 Wonders of the World, featuring an ancient city built into the sandstone cliffs. One of Jordan’s natural destinations includes the Dana Nature Reserve, with hiking opportunities in the Great Rift and a historic village. Wadi Rum is another UNESCO protected area, with scenic landscapes of sandstone cliffs and natural arches, as well as caves featuring petroglyphs.

The Dead Sea is an important stop during a visit to Jordan, where visitors can experience the lowest land area on Earth and feel what it’s like to float in one of the saltiest bodies of waters on Earth.

Jordan’s biggest airport is Queen Alia International outside of Amman, followed by Marka International which is in East Amman, and King Hussein International Airport in Aqaba. Jordan has highly ranked transportation infrastructure. Trains run from Syria into Jordan, though they are very slow. To get around Jordan, taxis are readily available in cities, and renting a car is feasible, but buses are likely the best option.