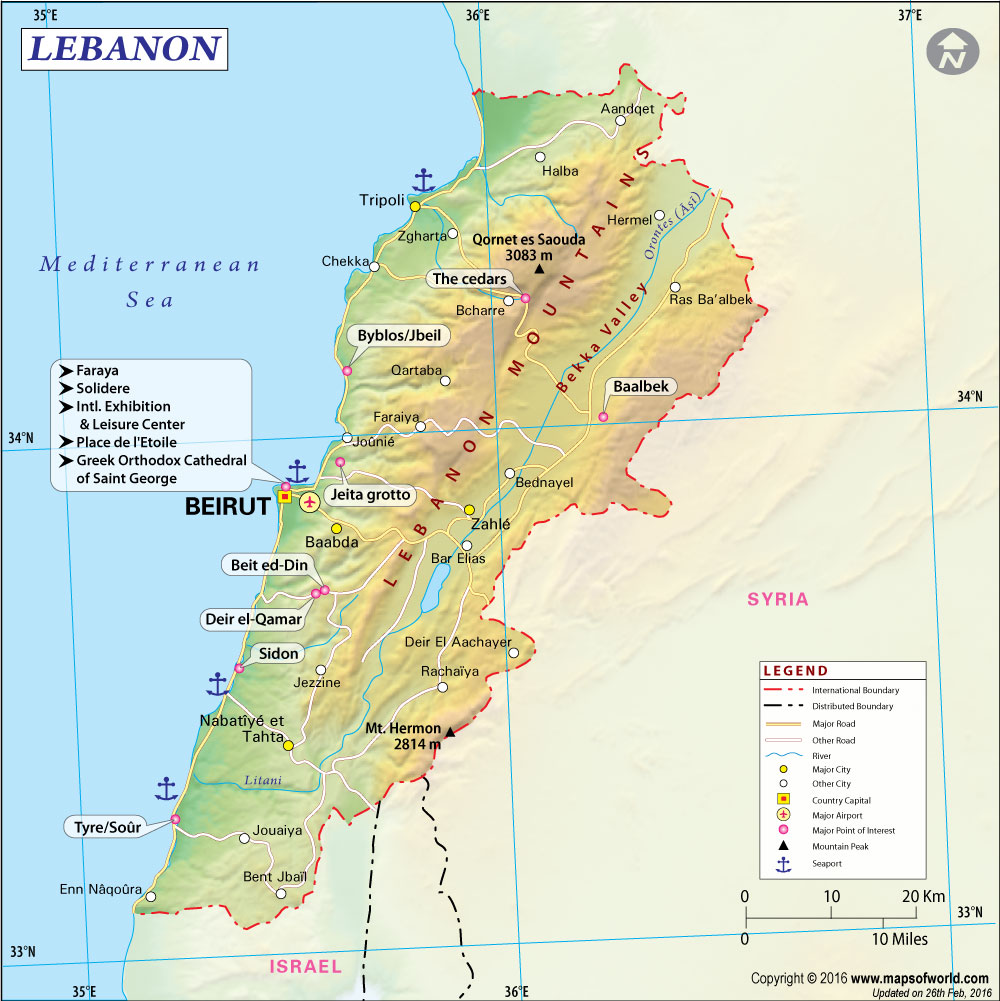 Known officially as the Republic of Lebanon, Lebanon is located at the juncture of Mediterranean Basin and Arabian hinterland. It surrounded by Israel to the south and Syria to the east and north.

Lebanon is an Eastern Mediterranean nation, with a history marked by religious movements and ties to Biblical sites like the land of Canaan and Phoenicia, whose people colonized Carthage. The Phoenicians controlled the land of Lebanon from around 1550 to 539 BC. Lebanon was conquered by many large empires throughout the next period of its history, including the Egyptians, Persians, Assyrians, Romans, Arabs, and eventually the Ottomans.

Along with much of Europe and western Asia, Lebanon became part of the Roman Empire around 64 BC, adopting Christianity as its major religion. The Maronite denomination of Christianity began in the mountains of Lebanon, giving rise to a major religious movement that persists even today, and has played an important part in Lebanese history.

The Arabic invasion in the 7th century brought Islam as the new dominant religion, later leading to the rise of the Druze religion (a branch of Islam) in the 11th century. The remaining Christians of Lebanon, together with the Romans, went to war against those Muslim invaders, beginning the Crusades. The Crusades were a series of long religious battles in the Middle Ages.

Lebanon became part of the Ottoman Empire from around the 16th century until its collapse after World War I. In 1920, Lebanon was mandated to French control. The French created the Lebanese Republic in 1926, and then granted independence to Lebanon in 1943.

The religious tension in Lebanon remained, and the country broke out in the Lebanese Civil War in 1975. The war was fought between the nation’s Christians and Muslims, each side with foreign support from various nations. Over 100,000 people died in these battles, and even more were exiled or displaced from their homes. A peace treaty was finally accepted in 1989 with the Taif Agreement. Despite this, unrest has continued in the region throughout the 21st century, and the conflict in Syria has also affected Lebanon, with fights flowing across borders.

Lebanon shares borders with Syria and Israel, and has coastline along the Mediterranean Sea.

Lebanon’s coastline stretches along the Mediterranean Sea on its western edge. The narrow coasts of Lebanon are characterized by coastal plains and rocky shores. Lebanon’s major mountain ranges are the Mount Lebanon range and the Anti-Lebanon range, or Eastern Lebanon range. Between these ranges is the Beqaa (or Biqa) Valley, which is situated along the Great Rift Valley, formed by the separation of the African Plate. The main rivers are the Orontes (known as the “Rebel River”), the Al Qasmiyah and Litani River. The major lake of Lebanon is called Buhayrat al Qirawn in Jezzine.

Lebanon’s historic sites are some of its greatest treasures. The entire city of Byblos, an ancient Phoenician city, has been designated a UNESCO World Heritage site, for its historic significance. Its sites include the Crusader Castle, built during the Crusades in the 12th century, churches and mosques, and markets, or “souks.” The city of Baalbek, once known as Heliopolis, offers ancient Roman architecture including the temples of Bacchus and Venus. Tyre also features a UNESCO site, the Roman hippodrome, and the Al Bass archaeological site.

Tripoli is one of Lebanon’s best known cities, with the Old City of El Mina displaying remnants of the Mamluk culture as well as the historic sites of the many empires ones controlling the city. Along with mosques, such as Al Muallaq, Al Mansouri, and Al Attar, Tripoli also offers scenic attractions. Just off the coast of the city, Palm Islands is a nature reserve, and the islands are a habitat for sea turtles.

Lebanon’s airport is Beirut International, which offers service to airports primarily in the Middle East, Europe, and Asia. There are no current direct flights from North American cities to Beirut. Buses and infrequent boats are available for entering Lebanon, particularly from Turkey or Cyprus. To get around cities, the main form of transport is taxi, and sharing taxis is very common, but buses and minibuses and car rentals are also available. Lebanon does not offer rail service.