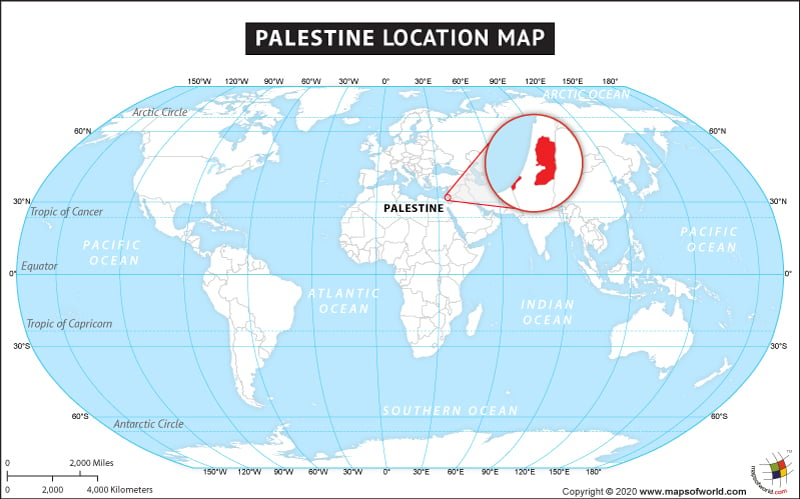 Description : Map showing the location of Palestine on the World map.
0FacebookTwitterPinterestEmail

Palestine is an area in the eastern Mediterranean region between the Jordan River and the Mediterranean Sea in Asia. Palestine territories include the Gaza Strip, the West Bank, and parts of modern Israel. This region has a strategic location between Jordan in the east, Lebanon and part of modern Israel to the north, the Mediterranean Sea to the west, and the Negev and the Gulf of Aqaba to the South. Syria, Egypt, and the Arabian nations are its neighboring countries.

This region is also occasionally called the Holy Land as it is considered the birthplace of Judaism. For Christians also, this place is of great importance mainly because Jesus Christ lived and died here. Historically, this region has been under constant controversy and political instability due to confusion about its boundary with Israel. In November 2012 after a long struggle, the region of Palestine became a non-member observer state of the United Nations. The total area of this region is 6,217 sq. km, including the Gaza Strip and the West Bank. The city of Gaza is the largest city in the Gaza Strip and Hebron is the largest city in the West Bank region. Centrally located El-Bureij, Beit Lahiya in northern Gaza, and Jabaliya in the north are some important regions.

The Palestine region has a moderate Mediterranean climate and limited natural resources. The majority of the Palestinian population are Sunni Muslims. Economically, this region has a lower economy with many of its people engaged in agriculture and small-scale industries.