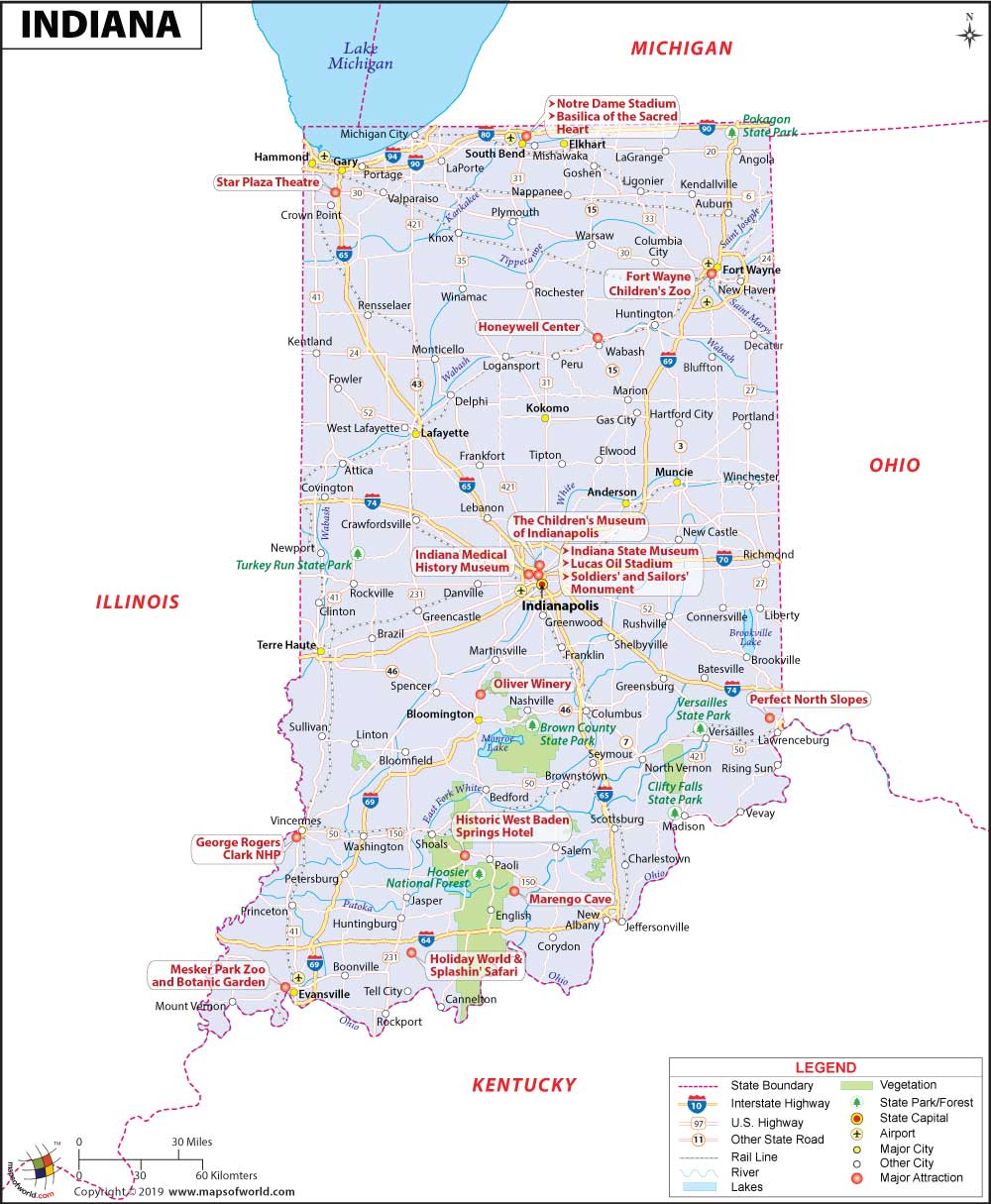 The US State of Indiana is the 19th state in the United States. On December 11, 1816, it was admitted to the Union, and Indiana achieved statehood. The State of Indiana’s nickname is “The Hoosier State.”

Indianapolis is the capital, the largest city, and the most extensive metro/urban area of Indiana. The official language in Indiana is English. In the US, Indiana is the 17th most populous state.

On May 11, 1917, the flag of Indiana was adopted, and in 1955 it was standardized. The flag design was inspired by the original design of Paul Hadley, with the only addition being the state name “Indiana” over the torch’s top in a crescent shape.

The official symbol or emblem of Indiana is the Seal of the State of Indiana. During Indiana Territory’s administration, William Henry Harrison created the original seal. In 1816, the design was adopted. However, the legal sanctions on the seal’s design and standardization were given by the 1963 General Assembly.

Learn more exciting aspects of the State from Key Facts of Indiana.

Indiana Location Map shows the exact location of the US state of Indiana on the USA map. This map shows the boundaries of this US state, neighboring countries, and oceans.

The State of Indiana is located in the midwestern USA. It shares its border with:

At 1,257 feet (383 m), Hoosier Hill is the highest elevation point. The state’s lowest point is at the junction of the Wabash River and Ohio River in Posey County, at 320 feet (97.5 m) above sea level. The Ohio River, Tippecanoe River, White River, Wabash River, and Kankakee River are some of the major rivers in Indiana. The state’s major lakes are Lake Wawasee, Lake Michigan, and Monroe Lake. Check this Indiana Topographic Map to learn more.

Learn more about the location of mountain peaks, rivers, lakes, state boundaries, the state capital, neighboring states, ocean, and from this Physical Map of Indiana.

The climatic condition in Indiana is characterized as humid subtropical. This climate features a warm summer and temperate winter. Across the year, rainfall is more or less evenly distributed. Some floods and droughts take place in Indiana from time to time. The average rainfall in the state varies from 37 inches (939.8 mm) in the northern regions to 47 inches (1,193.8 mm) in the southern parts.

The earliest evidence of human beings in today’s Indiana region has been found in the Archaic stage (8000–6000 BC). Between 1000 BC and 200 AD, the early Woodland period existed. Mississippian culture emerged around 1000 AD.

The United States troops took control of Indiana after the American Revolution. In 1787, Indiana became a part of Northwest Territory. After Ohio attained statehood, the territory was renamed the Indiana Territory. Tecumseh, the Shawnee chief, launched a battle against the United States after uniting several tribes. In 1811, Indiana Governor William Henry Harrison launched an attack on the tribes at the Battle of Tippecanoe and defeated the natives.

On December 11, 1816, Indiana became the nineteenth state of the Union. In 1825, the state’s capital was moved from Corydon to Indianapolis.

Indiana has 92 counties. Allen County is the largest, and Ohio County is the smallest county. Check the Indiana County Map to learn more about the location and boundaries of different counties in the state.

The area codes in Indiana are:

The Indiana Area Codes Map will help you locate any area code you are searching for. You can also use it to learn about the area code boundary, county and state boundaries, and state capital.

Learn about Indiana’s significant places from this map of cities. You can know the exact location of the state capital, other cities, state boundaries, neighboring states and oceans, and many more. Indiana’s most prominent cities are Indianapolis, Carmel, South Bend, Evansville, Fort Wayne, and many more. Check out the Indiana Cities Map for more details.

Check out the National Parks in Indiana Map to get a clear idea about the locations of different national parks, monuments, preserves, etc.

The US State of Indiana has various historic and renowned private universities, the most notable being the University of Notre Dame. Indiana University is the largest institution in Indiana. In 1820, its flagship campus was endorsed as Indiana Seminary. Majority of the students in Indiana are enrolled in public institutions.

FAQ #1: What Time Zone Is Indiana?

FAQ #2: What Is The Capital Of Indiana?

Ans: Indianapolis is the capital of Indiana.

FAQ #3: What Is Indiana Known For?

Ans: Indiana is known for its vast farmlands, Hoosiers’ homeland, as the world’s basketball capital, the Monon trail, The Indy 500, corn, University of Notre Dame, steel mills, and others. Check places to visit in Indiana.

FAQ #5: Who Is The Governor Of Indiana?

FAQ #6: What Is The Population Of Indiana?

Ans: Indiana’s population in 2022 is estimated to be 6.83 million, making it the 17th most populated state in the United States.

FAQ #7: What Is The State Bird Of Indiana?

FAQ #8: When Did Indiana Become A State?

FAQ #9: How Many Counties Are In Indiana?

Ans: There are ninety-two counties in Indiana.

FAQ #10: What is the Largest College in Indiana?

Ans: The Indiana University-Bloomington is the largest college in Indiana regarding the total number of students enrolled. It was founded in 1820.