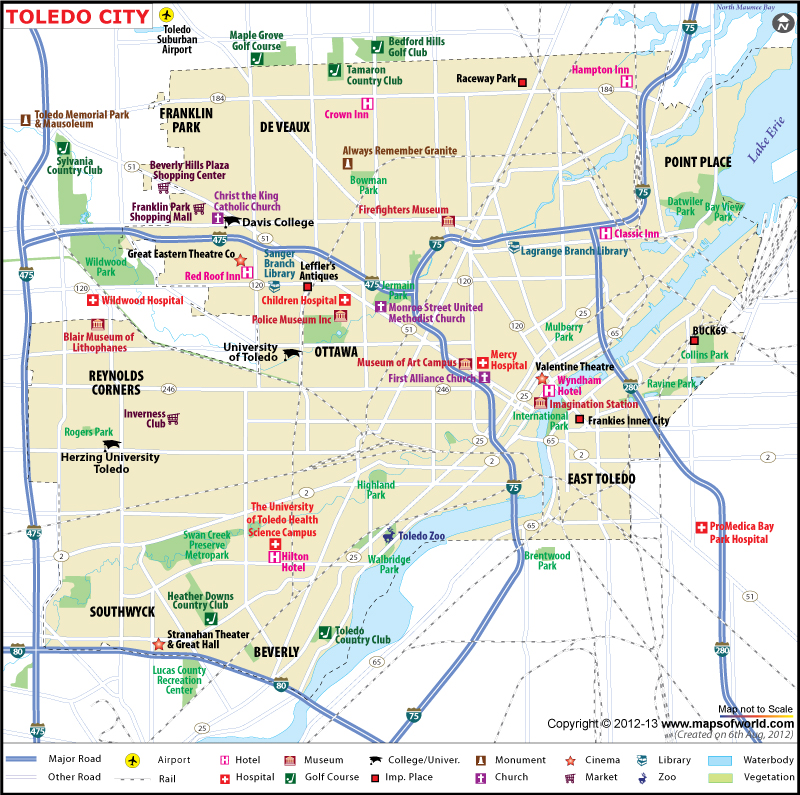 
Toledo City Map
Located on the western shore of Lake Erie, Toledo is a city in northwest Ohio. It was founded in 1833 before the Erie Canal was opened. The city is the county seat of Lucas County. Toledo is nicknamed 'The Glass City' owing to its long history of glass manufacturing. The city covers an area of 84.12 square miles. After Columbus, Cleveland, and Cincinnati, it is the fourth most populous city in Ohio. The city is located within a few hours driving distance from major cities in Ohio and the Great Lakes region.

Places to Visit in Toledo
Housed in a Greek Revival building, Toledo Museum of Art exhibits collections of glass art and European & American artworks. One of the best zoos in the US, Toledo Zoo features more than 6,000 animals from over 500 species. Stroll past Victorian and Edwardian architecture of the Old West End and catch a performance of Toledo Symphony Orchestra at Stranahan Theater. Oak Openings Preserve, Wildwood Preserve Metropark, and Queen of the Most Holy Rosary Cathedral are other popular attractions in Toledo.

How to Reach Toledo
By Air- Detroit Metropolitan Airport is the primary gateway located 45 miles from the city.
By Train- Amtrak operates Capitol Limited and Lake Shore Limited routes through the city.
By Road- Interstate 75 connects the city with Detroit and Cincinnati.