Map of the Capital of Indiana 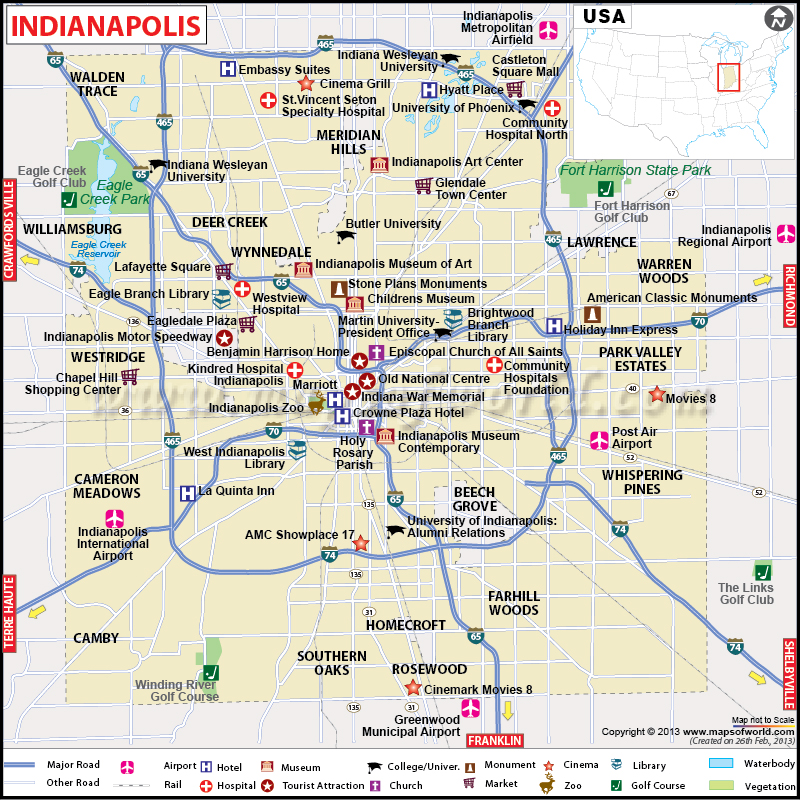 
Tourist Attractions:There are plenty of tourist attractions in Indianapolis to keep visitors in the city entertained. Some of the more popular attractions are the Children's Museum of Indianapolis, Crossroads Greenhouse, and Freetown Village. If you visit Freetown Village, you will be able to experience the lives of African-Americans in 19th century Indiana. You can take part in a variety of entertaining and educational programs, such as An Evening Dinner with Freetown Village, craft and heritage workshops, youth summer camps, touring performances, and theatre shows.


Amusement Parks: You can keep your adrenaline flowing at the thrilling amusement parks of Indianapolis. Some of these are Fishers Family Entertainment Center, Game Works Studio, and Greatimes Fun Park. The Game Works Studio offers the latest in video game technology. Some of the latest games are the full-size Indy cars and Maxflight,a simulated roller coaster. It is housed in an enormous 27,000 square foot party venue that has plenty of thrilling games for visitors.

Beaches in Indianapolis: There are not many beaches in Indianapolis, since it is located in the center of Indiana. Some of the beaches near the city are Indiana Beach, Cecil M. Harden Lake, Indiana Dunes, and Cagles Mills Lake. Indiana Beach is located on Lake Shafer in northwest Indiana. Families in Indiana have flocked to this beach in the summer for decades. The entertainment offered here during the summertime includes the boardwalk, amusement park rides, and water games. There are more than 20 adult thrill rides, a water park, a haunted castle, a mini golf course, and an Aqua theater with water stunt shows.

Transportation in Indianapolis: Mass Transit:The roads in Indianapolis are infamously confusing. Visitors to the city would do best to remember that the city layout is based on a huge circle.

Airports:The Indianapolis International Airport ()serves the city of Indianapolis. On average, 300 flights leave daily from this airport for over 100 destinations.

Restaurants in Indianapolis: There are a number of restaurants offering a variety of cuisines available to you in Indianapolis. For instance, if you want to eat French food tonight, then some choices are Chanteclair, The Classic Kitchen, and Brugge Brasserie. The latter is a trendy French restaurant that specializes in French country-style cuisine. Among the delicious items featured on the menu are Prince Edward Island Mussels, crepes, thick stews, and an assortment of delicious sandwiches. This is a family hangout, with a special menu for the kids and a variety of non-alcoholic drinks like root beer and orange-vanilla cream sodas to choose from.