The Oregon National Parks Map shows the accurate location of national parks, a historical park located in the US state of Oregon. The map also depicts the state boundary, railway lines, Interstate and State Highways in Oregon state. The map marks the state capital (Salem) and major towns as well. A map legend featured at the bottom helps all the signs, characters graphics, and symbols used throughout the map. 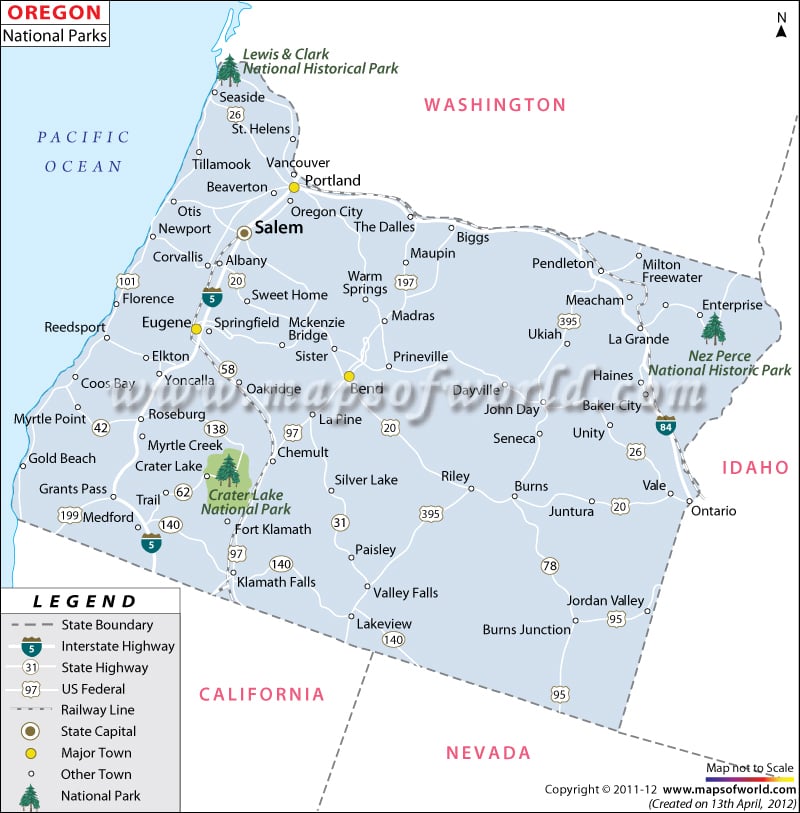 Description:Map shows the location of various national parks located in the US state of Oregon.
0FacebookTwitterPinterestEmail

The Map of Oregon National Parks prominently marks the several national parks, historical sites, and national monuments of the state.

The Oregon State Map indicates the accurate geographical location of the various national parks of the state. Situated in the southern part of Oregon, the Crater Lake National Park is one of the notable tourist destinations of the state. The John Day Fossil Beds National Monument reflects the rich ancestry of the state.

The Museums of Sheep Rock of the John Day Fossil Beds National Monument is one of the major attractions of the place. The Nez Perce National Historical Park represents the rich cultural traditions of the state.

How Many National Parks in Oregon?

Oregon has officially only one national park in the state that is Crater Lake national park. The park stands out for its clear blue waters and Caldera of Crater lake. Other than that there are 360 miles of Public beaches, gorges, wild rivers, forested peaks, and fossil-rich desert in the state. The other parks such as Lewis and Clark National Historical Park and Nez Perce National Historical Park are some of the prominent national parks of the state marked on the map.

Activities to do in National Parks in Oregon

The most popular months to visit national parks in Oregon are July, August, and September. That’s when the park’s roads, trails, and facilities are usually fully open. May and June are months of transition in the park, as winter slowly gives way to Summer.

The lingering snow can prevent us from accessing much of the park. Many facilities close in winter as well due to the snow.