National Parks North Dakota Map highlights the North Dakota national parks and historical sites of the state. The map indicates the geographical position of the historic places of interest of the state. Also, the map highlights major interstate (I-94), state, and US Federal Highways. The state capital (Bismarck) and major towns are also marked on the map with international and state boundaries. Railway lines can also be seen on the map near the national park. A map legend featured at the bottom helps all the signs, characters graphics, and symbols used throughout the map. 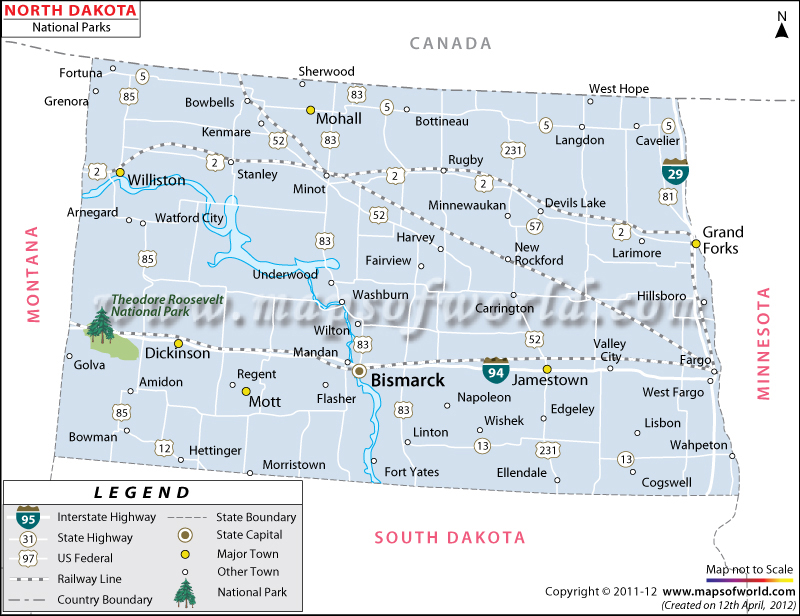 National Parks North Dakota Map indicates the geographical position of the historic places of interest in the state. Also, the North Dakota state map highlights the national parks of the place.

How many National Parks in North Dakota?

Knife River Indian Villages National Historic Site of North Dakota is one of the major national parks of the state which houses over 50 archeological zones. Each of these zones represents the agricultural practice and cultural traditions of Northern plain Indians.

The park is named in the honor of US President Theodore Roosevelt when he came to the Dakota Territory to hunt bison in 1883. It is the only American national park named directly after a single person. The park covers 70,446 acres of land in three sections: the North Unit, the South Unit, and the Elkhorn Ranch Unit. This park is the most prominent site of the state which possesses a vast expanse of Prairie, bison, prairie dogs, Elkhorn Ranch Site, Little Missouri, and hardwood drawers. One can do the following activities as you plan your next adventure in the park:

One can explore the Theodore Roosevelt park day and night, any time of year. Visitor center hours vary by season. In the winter season, there are occasional road closures for snow and ice. Campgrounds are open year-round. Rangers host a variety of activities, mainly June through mid-September