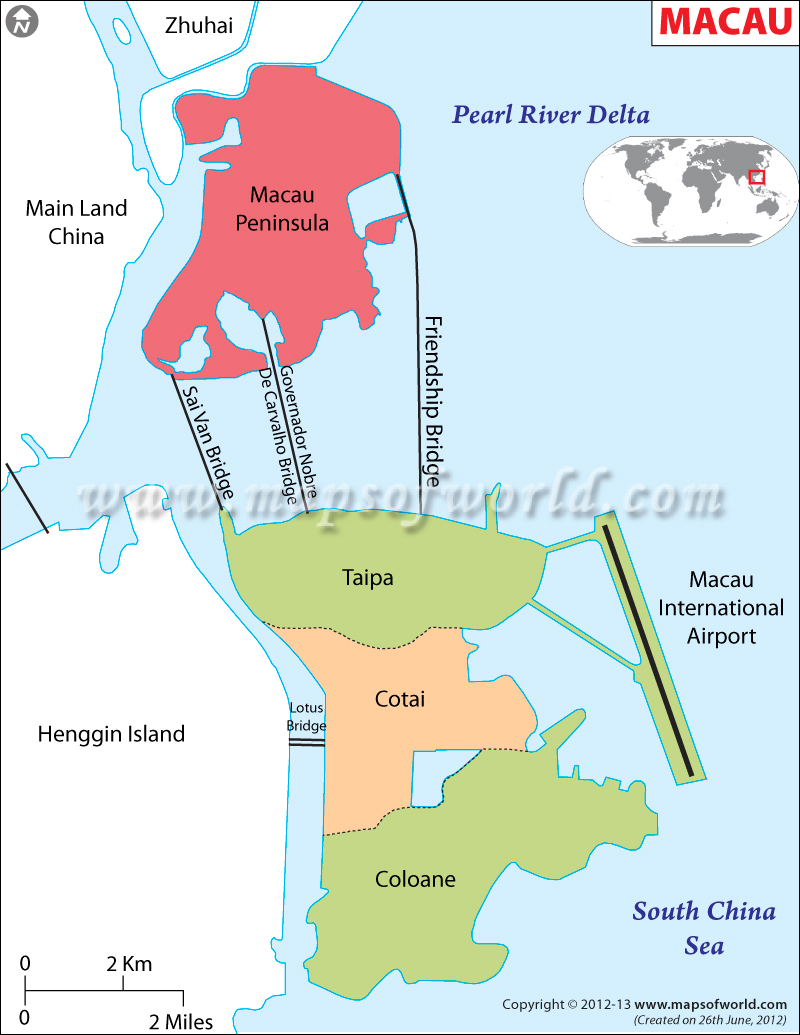 Explore this Macau map to learn everything you want to know about this country. Learn about Macau location on the world map, official symbol, flag, geography, climate, postal/area/zip codes, time zones, etc. Check out Macau history, significant states, provinces/districts, & cities, most popular travel destinations and attractions, the capital city’s location, facts and trivia, and many more.

In the 16 th century Macau claimed itself to be China’s oldest European colony. Portugal ruled this country in the year 1999. Casinos are very popular in Macau.

Macau is situated in the southern region of the People’s Republic of China, i.e. the coastal area. The island nation is very close to the Zhuhai Special Economic Zone.

The flag of Macau Special Administrative Region is beautifully designed. The background color is light green and the flag features a lotus in its center. The flower is placed on a white bridge and under that, there is water, also colored in white. Above the lotus five stars are shown in shape of an arc. The central star is the biggest among them and the others are smaller in size.

The climate of Macau Special Administrative Region can be termed as subtropical.

The summer months are hot and the winter months are relatively colder. In July the weather becomes hottest and the temperature reaches 28.6 °C. On the other hand the month of January is known for coldest weather when the temperature goes down to 14.5 °C. Rainfall occurs throughout the year in the country.

Flora And Fauna Of Macau, China:

•  Flora : Macau does not have a rich and vegetation. The industrialization has affected the vegetation of the country a lot. Various species of pine and bamboos in Coloane can be found.

•  Fauna : Animal life is also not very diverse. However you will find varieties of lizards, venomous snakes, wildcats, parrots etc can be found in the forests of the country. The water bodies of the country also contain a great number of crocodiles.

The total population of Macau Special Administrative Region is almost 453,125. Macau is home to various ethnicities such as Chinese, Macanese and so on. Chinese people form the majority if this vast population. The country has two official languages i.e. Cantonese and Mandarin

•  Art : Macau is known for its artistic expressions. Porcelain works, pottery, beading work, knitting works are practiced in this country. Besides that some local handicrafts also exist in his country.
•  Culture : In the presence of various ethnic groups, Macau has developed a rich and diverse cultural atmosphere. Music and dance are considered as two integral parts of the coin tradition of Macau.

•  Music : Music is very much appreciated in this country. Some of the musical institutions of this country are Macau Orchestra, Macau Conservatory etc.

Macau International Music Festival is one of the biggest festivals in this country. besides that pop music and country music are also popular in Macau.

The economy of Macau basically depends on it tourism and export business. He agriculture of this country is not very developed. Very few vegetables grow here. Tourism, textiles, electronics, clothing, footwear, gambling, toys etc are the primary industries that are flourishing in this country. The export materials of the country are textiles, footwear, clothing, toys, machineries, electronics and so on. US, Hong Kong, China, Germany are the primary nations that are involved in this export business with Macau