Portland is a major port city located in the northwest of Oregon State. It is the largest city in the state of Oregon, in terms of population. Portland is spread across 145.4 sq miles and is home to a population of approximately 654,741 (2019 est.). Before the arrival of Americans via the Oregon Trail in the 1830s, Portland was historically inhabited by indigenous people such as Chinook, Multnomah, and Clackamas. The City of Portland is commonly known as "The City of Roses" because of its climate ideal for planting Roses. 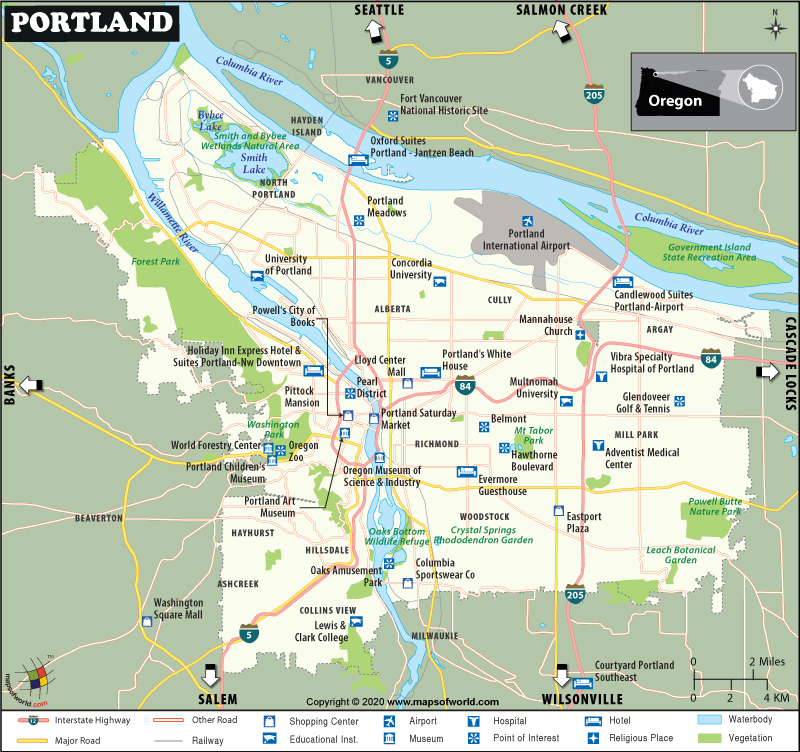 The second largest city in the Pacific Northwest (after Seattle), Portland is a small big city with a lot of character. Notorious for being something of a hipster haven, this trendy town has been drawing twenty – and thirty-something’s for years – so many that Portland has suffered from high unemployment rates along with the jump in population. Portland boasts a lively crowd, full of artists, mustachioed men, and lovers of microbrew beer and coffee.

Portland is a green city in every sense, leading the nation with its progressive attitudes toward saving the environment. Portland’s bike lines, strong public transportation systems, community gardens and emphasis on farmers market and shopping locally have pushed forward the movement across the country.

Portland is a great city for shopping, with no sales tax and the potential of discovering some unique finds. The shopping districts in Portland are located downtown, the Pearl district, and Northwest Portland. The major indoor shopping centers include Pioneer Place and Lloyd Center, but Portland features many boutiques and independent stores, as chains are often unwelcome in Portland.

Powell’s City of Books claims the title of world’s largest independent book store with a whopping 1.5 million books – they even have maps to help shoppers navigate the store.

Portland is known for brewing both beer and beans

– coffee, that is. The microbrewery capital of the world, home to many famous microbreweries. Known for their great coffee and latte art, Stumptown Coffee Roasters is one of Portland’s most loved coffee shops, with locations on Division, Belmont, downtown, and a few others around town. Oregon also specializes in wines, particularly Pinot Noir and Pinot Gris.

Some of Portland’s culinary specialties include organic foods, vegetarian and vegan foods, and ethnic foods. Portland was an early adopter of the food truck and other dining trends. Pearl Bakery is famous for its bread and pastries, while Voodoo Doughnut has become a very popular spot for its creative doughnuts that come in a wide variety of flavor combinations.

Lodging options in Portland range from hostels and chain budget hotels to resorts and ritzy hotels, like one of the “World’s Best Places to Stay,” the Heathman Hotel.

– Visitors can admire the architecture of the courthouse as well as the park’s art and waterfall, and enjoy activities like chess games and the Weather Machine, which announces the weather forecast for the following day in a fascinating display.

– The largest weekly open-air arts and crafts market in the country.

– There are several locations for markets on various days of the week, but main market is on Saturday.

– The tram takes passengers on a three minute ride through the air, between the South Waterfront and the Oregon Health & Science University, offering great views of the city.

Oregon Museum of Science and Industry – Just one of several museums Portland has to offer, this museum has educational and entertaining activities for children and adults, a planetarium and a submarine.

– Hiking, cycling, and golf are a few outdoor recreational activities available in Portland. During the winter, the Portland area boasts North America’s longest ski season, with resorts and slopes on Mount Hood, about an hour from Portland. Water sports are also popular, including kayaking on the lakes downtown or the Willamette River. Outdoor spaces are some of Portland’s best features, with a variety of gardens, including the Chinese gardens, Japanese gardens, and the Rose Test Garden.

Portland has a lively nightlife scene, though the focus is more on laid back evenings than clubbing. Some of Portland’s typical nightlife options are Brew ‘n’ View Movie theaters, which mix two of Portland’s favorite activities – drinking beer and watching films. Some bars in Portland feature activities like trivia contests and even a spelling bee. Brewpubs, a combination brewery and pub, are a common site in Portland, and there are several beer and brew festivals in town. Portland’s music scene features venues for all types of music, including both local music and the big names.