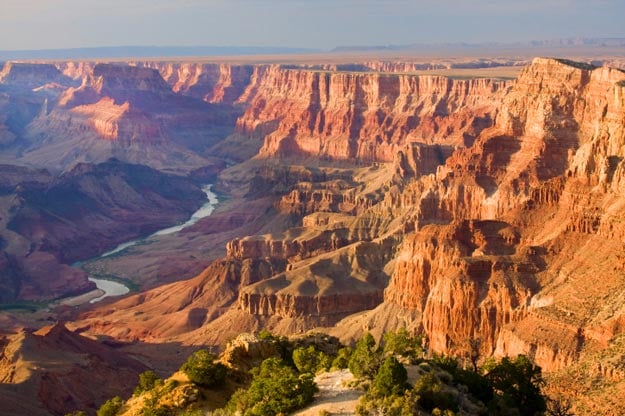 The Grand Canyon is a very colorful, steep-sided gorge that has been carved by the Colorado River in Arizona in the United States of America. It is one of the most studied geologic landscapes in the world.

This mile-deep gorge, carved out by the Colorado River over two billion years ago, attracts many tourists every year. Tourists can explore the Grand Canyon by plane, river rafts, jeeps or trains.
Some popular Grand Canyon Tours include South Rim Tours, West Rim Tours and North Rim Tours. The majority of visitors to the Grand Canyon visit the South Rim, which offers great views and many trails, and most of the lodging options. The North Rim takes quite about five hours to reach by car, therefore it is much less visited.

Visitors to the Grand Canyon hike around and down into the canyon, and stand in awe of its massiveness. The most adventurous and fit hikers can make their way to the bottom of the canyon and stay overnight in Phantom Ranch, before making the return hike the following day. Another way to reach the bottom and to stay in Phantom Ranch is to book the overnight mule ride. Helicopter rides are another fun way to see the Grand Canyon.

Canyon River Adventure is a tour that takes you on an enthralling sunrise tour of the Grand Canyon. The tour includes visit to Lake Powell, Glen Canyon Dam, Grand Canyon National Park. The Colorado River Float Trip is the perfect trip for those who are looking forward to a smooth water rafting one day experience. The Grand Discovery Air Tour is a 50-minute air tour over the Grand Canyon.

While on the Imperial Helicopter Tour, tourists are able to see the merging of the impressive Colorado River and the Little Colorado River. The Grand Canyon Railway travels through the forests and mountain lands. Tourists can book any one of the five different class seats such as Coach Class, Club Class, First Class, Observation Dome and Parlor Car. The North Canyon Helicopter Tour lets you explore the Dragon Corridor and the Central Canyon. The Grand Canyon Sunset Jeep Tour takes you on a tour of the Kaibab National Forest where you get to catch glimpses elk, deer and other species of wildlife. The Grand Canyon Mule Trips are also available.

Also Check:  Where to Stay at the Grand Canyon 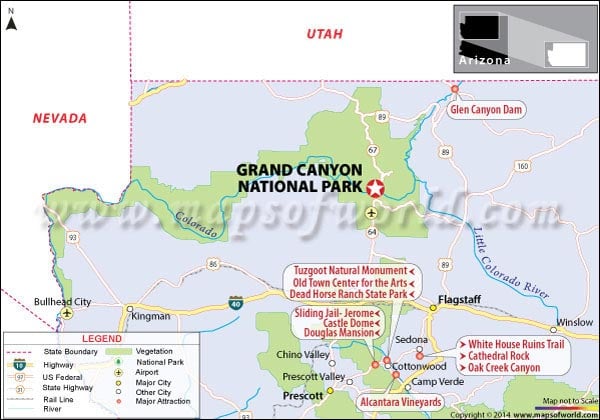 Where is Grand Canyon National Park?

The Grand Canyon can be visited 365 days a year, though snow can prevent visitors from reaching the canyon when roads are closed. As the Grand Canyon is located in the desert, temperatures can be extreme, especially below the rim. Spring and autumn can be unpredictable.

The South Rim is open round the clock throughout the year, while the North Rim opens from May 15th through October 15th.

The individual fee for entry into the Grand Canyon National Park is USD 15 per person. The vehicle permit costs USD 30 per entry. The admission to the National park is valid for seven days. There are certain days when the entry to the park is totally free.