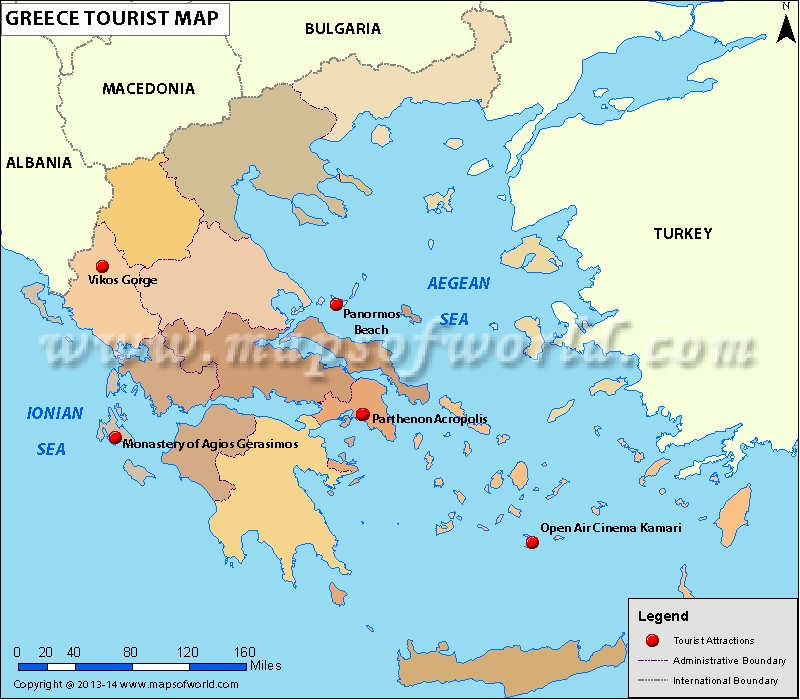 Regarding Travel, Greece excels both in terms of its beautiful locations as well as the historical and ethnic value of its ancient sites. A traveler would seek to enjoy the serene and intense ambiance of the antique cities of Greece, marveling about the historical magnificence they have witnessed. On the other hand, Greece also presents bright and attractive islands, rich in scenic beauty, and also throbbing metropolises with the flavor of urban excitement. The sacred island of Delos, the frescoed Minoan palaces on Crete and the remnants of Atlantis at Santorini are the major attractions that Greece has in store.

The city of Athens is a major attraction in Greece with its strong historical background and mythological worth, as well as the genial environment of the city with the lively outdoor cafes. The other most important destination in Greece is Crete, with its eminent background in Homeric history and culture. The city is fragrant with wild fennel and basil, and presents an exotic environment.

After the fashionable French Riviera and the white sand-dunes of exotic Egypt it is time to savor the delights of the Mediterranean culture and start preparing for the holidays in Greece . No wonder it is the perfect choice for most of the holidayers because it has to offer so much on its platter. One is privileged to have a glimpse of the precious ancient civilization along with the sun-kissed beaches, forested ravines and at the same time wander among the ruins of cultural monuments.

The islands of Greece, engulfed by the Aegean Sea, had always been the major attraction of the place. Some of the renowned islands which have successfully managed to capture the imagination of the travellers are Crete, Mykonos, Santorini, Rhodes, Sikinos, Tinos, Skopelos etc. Only once in a lifetime the mortals get the chance to have a glimpse of the heavenly abode of the gods in Mount Olympus and stroll through the countless vineyards of Crete. The place is blessed with sunshine all around the year. The Pelopnnese, known as the deepest point of the Mediterranean, is something that one cannot miss. It is time to relive the glorious history while one meanders on the stone-paved paths of Athens, Patras, Larissa, Volos and Rhodes.

If one is satiated with the historical extravaganza of Greece it is time to move to Athens’s vibrant nightlife which includes open-air tavernas in exotic Plaka, bouzouki clubs, discos and casinos. Keeping in with the ancient tradition of Greece, performances take place in amphitheatres and under the blue sky. A number of open theatres are located in Athens, Epidaurus and some places in south of Corinth. A treasure-house as Greece is commonly known celebrates every festivals and events with gusto and enthusiasm. The tourist can enjoy the Epidaurus Festival, Dora Stratou folk dancing and Athens festival and still crave for some concerts in Megaron Mousikis or Music Halls.

If the zest for tantalizing cuisines is one of the reasons to visit this Mediterranean beauty there shouldn’t be any disappointment. One can simply bask in the poetry of Keats while sipping the excellent wine freshly made from the vine-yards. The wine festivals in Athens , Patras , Thrace and Crete will numb the senses as rightly quoted by Keats. It is time to take a dip into the splendor of sea-food or relish the Moussakas garnished with eggplant or zucchini or just take a taste of the tasty lamb preparations cooked with olive oil and fresh spices. The fresh pilafs or fila pitas composed of wafer-thin pastry, chicken and mushrooms or the baklava the multi-layered pastry are some of the delights that is hard to ignore.

The purse is not always the main concern when one is wandering among the shopping complexes and stores. The magnificent artefacts, jewelleries, and breath-taking designs of the local boutiques will complete the perfect holiday. The Euro is the national currency of Greece and all the major international credit cards are accepted in the shops.

Greece is a homogeneous nation, and Greece Immigration was the maximum throughout the 20th century and after the Second World war. People from various parts of the world felt a strong reason to come and reside in this country due to many political and cultural reasons.

The early period of Greece’s modern History have always recorded emigration at far higher rate than immigration. The mid 20th century when the Greek Civil War and The Second World War took place large population immigrated from Turkey to Greece. However in1970s, Greece experienced migrants of the Polish, South Asian, African and Egyptian origin, which counted up to almost 50,000 if totaled.

The immigration to Greece in 1990s was on an extensive scale and mainly illegal. The migrants were from the surrounding Balkan countries, specially from Albania into Greece. This created a conflict in the major political ground in Greece and all prominent parties made a comment and quoted policies with the objective to deal this issue. Though the modern statistics feature a peaceful relation between the Balkans and Greeks and the immigration from Balkans have also come to a steady rate. Some other country’s populations also have a gradual immigration to Greece, they are Kurds, Pakistanis, and few groups from sub-Saharan Africa regions.

The rich and divers environment of Greece make it a perfect destination for ecotourism. Greece boasts of the areas of great ecological value. The attractions of Ecotourism in Greece comprises magisterial rocky massifs, indented coasts, mystical caves, deep gorges, serene lakes, meandering rivers, unique habitats and mild climate. The nature lovers get ample of opportunities to get the real taste of nature. The aesthetic forests of Greece and national parks of Greece offers an opportunity of exploring as well as admiring the rare bird and wildlife species seeking refuge in wetlands and coastal ecosystems. It is an excellent destination to explore the diverse flora and fauna of the region.

The meandering Rivers of Greece are exact destinations to get engaged in extreme sports comprising canoe-kayak, monoraft, hydrospeed, rafting, canyoning and so on. The wonderful natural environment created by the gorges, caves and waterfalls produce a spectacular scenery. The marine parks of Alonissos and Zakynthos provide shelter to protected species. The agrotourist units of Greece afford visitors the chance to getting familiarized with rich cultural, vernacular architecture, local products, gastronomic delights, farming activities of the inhabitants. Ecotourism in Greece is a potential sector that has an ample scope for growth.

Greece is one of Europe’s most popular honeymoon destinations. Greece Honeymoon provides every honeymooner with a wonderful experience. There are many Greece honeymoon resorts all over the country, especially in the spectacular islands of Greece. These resorts provide a wonderful ambiance for spending a romantic honeymoon in Greece.

The facilities provided by Greece resorts are :