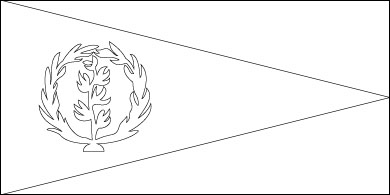 Download Picture of Blank Eritrea Flag For Kids to Color

The flag of the State of Eritrea comprises two triangles in green and blue with a red triangle pointing away from the hoist side. In the center of the red triangle is a yellow wreath with fourteen leaves on either side. The idea of the wreath is derived from the 1952 version of the Eritrean flag.

Eritrea adopted its state flag on December 5, 1995, which makes it one of the newest flags in the world.