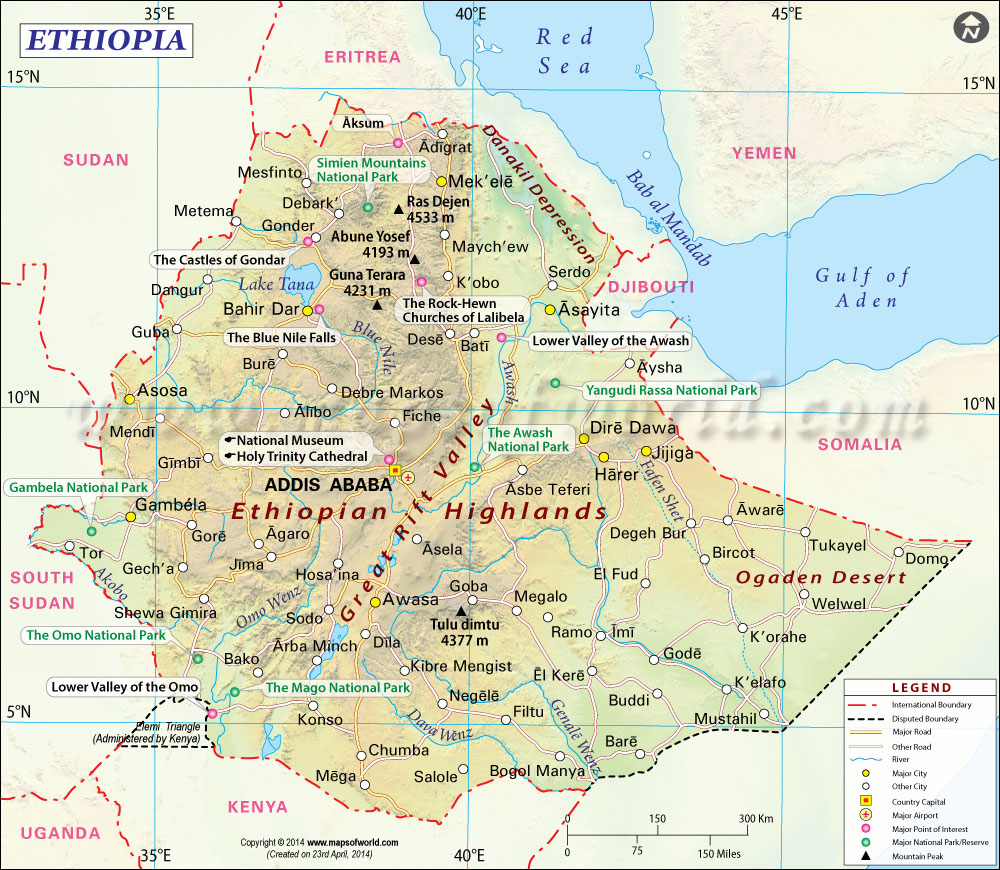 Formally known as the Federal Democratic Republic of Ethiopia, this eastern African nation is sometimes considered the cradle of civilization. Ethiopia’s history is one of the oldest in the world, with the earliest known human remains discovered in the country dating back up to 200,000 years.

Ethiopia’s history is intertwined with its neighbor, Eritrea. Together, their lands were ruled by the D’mt kingdom from the 8th to the 4th century BC, and by the 1st century AD it was controlled by the powerful Kingdom of Aksum. Ethiopia was an early adopter of Christianity as an official religion around 320 AD, and was probably the second country ever to adopt the religion. The Middle Ages saw the rise of the Zagwe dynasty, which like the Aksumite Empire, had contact with the major powers of Europe.

Emperor Menelik II, who ruled from 1889 to 1913, conquered surrounding regions, joining the Oromo, Sidama, Gurage, Wolayata, and other groups to create the empire that is now Ethiopia, though he subjugated the people in the process, killing many. The Italians gave support to Menelik, gaining influence in return, as well as eventual control over the land of Eritrea. What began as support for Menelik led to bloody conflict, in which Italy attempted to gain control but the Ethiopians defended their land. The conflict led to a serious famine which killed one-third of the population.

Emperor Haile Selassie I ruled Ethiopia, fighting Italian occupation and soon severing Italy’s control. The legacy of Ethiopia is that it became the first independent African nation to join the UN and was a founding member. Ethiopia led the way in Africa, serving as a model, as shown by the many other African nations incorporating Ethiopia’s national colors as they gained independence.

Physical
Ethiopia is an entirely landlocked country, and is in fact the most populous landlocked country worldwide. Its terrain features highlands of mountains, plateaus, and the Great Rift Valley, caused by the separating tectonic plates. There are deserts along Ethiopia’s eastern border, and tropical forests in the south, though Ethiopia faces deforestation problems. Here is Ethiopia Physical Map showing all physical feature of the country.

Mount Entoto is one of Ethiopia’s most prominent mountains, rising 3,200 meters over Addis Adaba. Some of Ethiopia’s major rivers include the Blue Nile, one of the Nile’s main tributaries, which begins at Lake Tana and may have been the river of the Garden of Eden, and Awash River that drains toward Djibouti at Lake Abbe.

Points of Interest
Ethiopia has the most UNESCO World Heritage Sites than any country in Africa. One of those is Aksum, a historic city of Ethiopia, featuring Church of St. Mary of Zion, which legends say is the home of the Ark of the Covenant. Also in Aksum are archaeological sites, like the Stelae fields, tombs, ancient scriptures, and the Palace of the Queen of Sheba. The capital, Addis Adaba, offers a variety of museums and government buildings, historic places of worship, the imperial palace where Menelik once ruled, and plenty of shopping.

Transportation
Ethiopia’s main airport is Bole International Airport near Addis Adaba, followed by Dire Dawa’s Aba Tenna D. Yilma International Airport, and other international airports in Mekele and Bahir Dar. Buses are available to take travelers to the borders of Ethiopia, but from there, you must walk across the border. There is no rail service in Ethiopia. To get around, renting a car is a good option with the improving paved and gravel roads, as is using a bicycle.