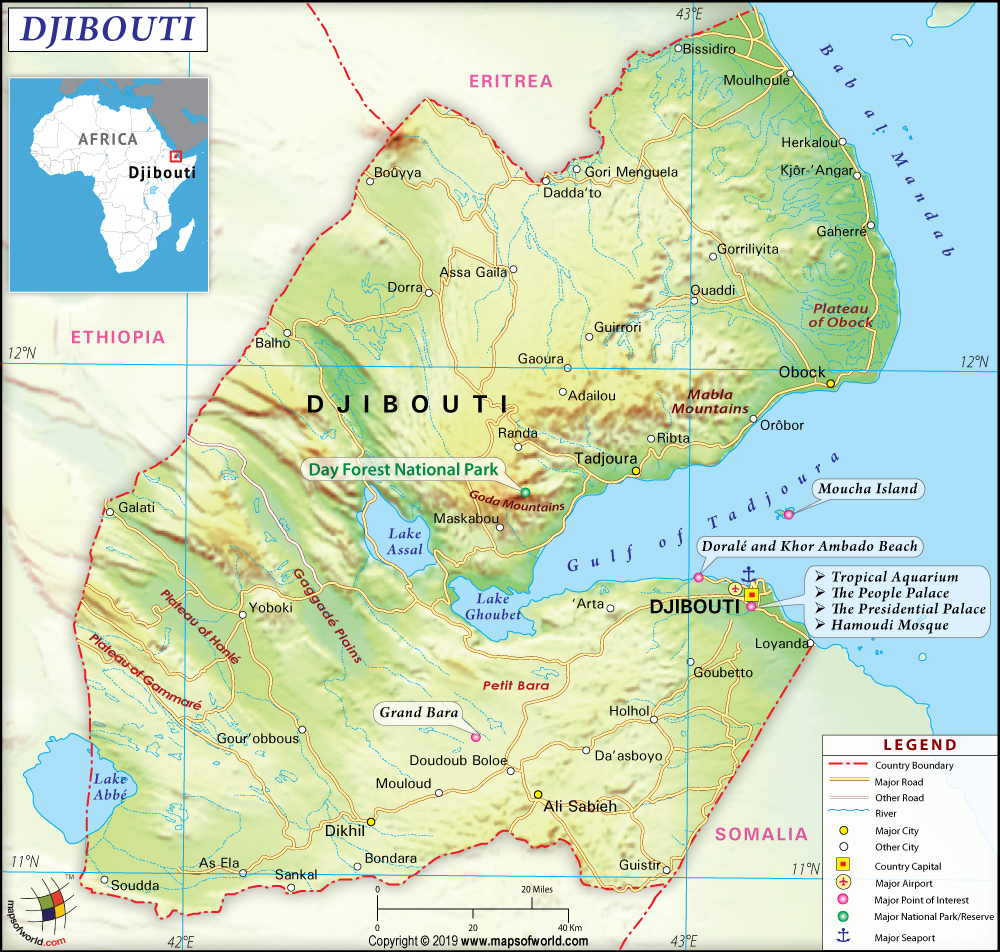 Djibouti is a small nation located on the Horn of Africa. The country has a very long history, with human habitation dating back to at least the 25th century BC. The region, including Djibouti and neighboring Somalia, Eritrea, and parts of Sudan were historically part of the Land of Punt. Punt, which had ties to ancient Egypt, was a kingdom ruled by King Parahu and Queen Ati. The area later became a Muslim territory, and part of the Ifat Sultanate in medieval times. It was ruled by various sultans over this period of its history.

In the 19th century, treaties with France led to the formation of French Somaliland, which had its capital in Djibouti, and lasted from 1896 to 1967. When Somalia fought for independence (eventually winning in 1960), Djibouti voted to remain under French administration, separating from Somaliland. Another vote took place in 1967, which lessened France’s hold over Djibouti, but remained in control. The name of the territory was then changed to Territory of the Afars and the Issas. Finally, with the third vote, the people of Djibouti voted overwhelmingly for independence in 1977, becoming the Republic of Djibouti. Since Djibouti has been a sovereign nation it has dealt with internal struggles and conflict, but after talks between opposing sides, the country has remained fairly stable.

Djibouti borders the African nations of Eritrea, Ethiopia, Somalia, with coastlines along the Red Sea and the Gulf of Aden.

Djibouti is a small country of just 23,200 square kilometers (8,958 square miles), with coastline along the Gulf of Aden and the Red Sea. The territory of Djibouti is positioned on the Horn of Africa, the peninsula protruding from northeastern Africa, which resembles a horn. The land of Djibouti is mostly arid, with coastal deserts and part of Africa’s Grand Bara desert. There are several mountain ranges in Djubouti, however, including Mousa Ali, Goda, Arrei, Mabla, Dagouein, and Boura ranges.

Djibouti also has a fissure vent volcano, called Ardoukoba, which is located near the salty Lake Assal.

Djibouti’s territory also includes two main islands, Maskali Island and Moucha Island, located in the Gulf of Tadjoura. These islands, along with the smaller islands that surround them, are not far from the coast and offer many recreational activities.

Djibouti does not have any rivers but has several dry riverbeds or wadis. Djibouti also has two lakes of interest: Lake Abhe and Lake Assal. Lake Assal is one of the saltiest lakes in the world and the third lowest point on Earth. The beaches of Djibouti are another popular attraction, especially Khor Ambado Beach in Tadjoura Bay. Within the city of Djibouti, there is a historic city center, Place Menelik, and a mosque, called Hamoudi.

Air transportation enters Djibouti at Djibouti-Ambouli International Airport, which offers direct flights to regional destinations in Africa and the Middle East. Djibouti is also accessible via its major port in the capital, which offers service across the Gulf of Aden to Yemen.

Transport can be managed using the bus services between towns in Djibouti. Within major cities and towns, taxis, cars and bicycles offer ways to get around, though the road conditions can be risky.