Eritrea political map provides detailed information on important cities, locations, states and the state capitals of Eritrea. This country is located between Sudan and Djibouti. Asmera is the capital city… 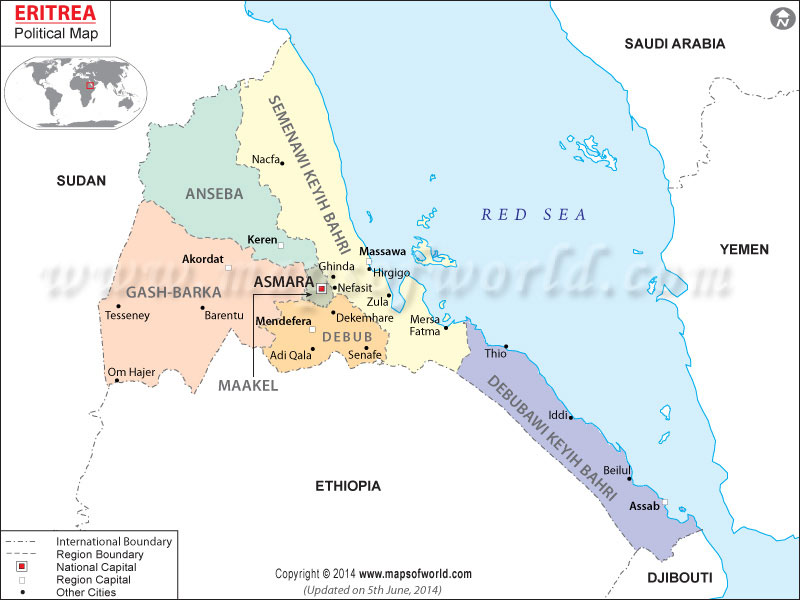 Eritrea political map provides detailed information on important cities, locations, states and the state capitals of Eritrea. This country is located between Sudan and Djibouti. Asmera is the capital city of Eritrea. Some of the important cities include Nakfa, Barentu, Adi Keyih, Aseb and Teseney.

Eritrea is a country that is located in eastern Africa between Sudan and Djibouti. It forms border with Red Sea. Located on the geographical coordinates of 15° North latitude and 39° East longitude, it covers an area of about 121,320 sq km. Eritrea political map helps to identify the important locations and cities of Eritrea.

Eritrea is bordered by Sudan on the western side, Djibouti on the southern side and Ethiopia on the southwestern side. These border countries are clickable on the Eritrea political map that leads the browser to the map of that particular country.

The cities of Eritrea can be identified on the Eritrea Map by the black dots put beside them. The cities of this country are Kerora, Nakfa, Keren, Akordat, Zula, Teseney, Barentu, Om Hajer, Adi Ugr, Dekemhare, Adi Keyih, Mersa Fatma, Beylul and Aseb.

The national capital of Eritrea is Asmera. A red square on the World Map Eritrea makes it easily identifiable. It is situated on the latitude of 15° 19′ 60″ North and longitude of 38° 55′ 60″ East. The city lies at an altitude of 2363 meters above sea level. Asmara International and Massawa International are the nearest airports to Asmera. Some of the nearby places include Godaif, Segdo, Adi Nifas, Ts’elot, Hinzi and Ad Abeito.