Know where is Egypt located. Egypt is located in Africa, the Middle East and lies between latitudes 26° 0' N, and longitudes 30° 00' E. 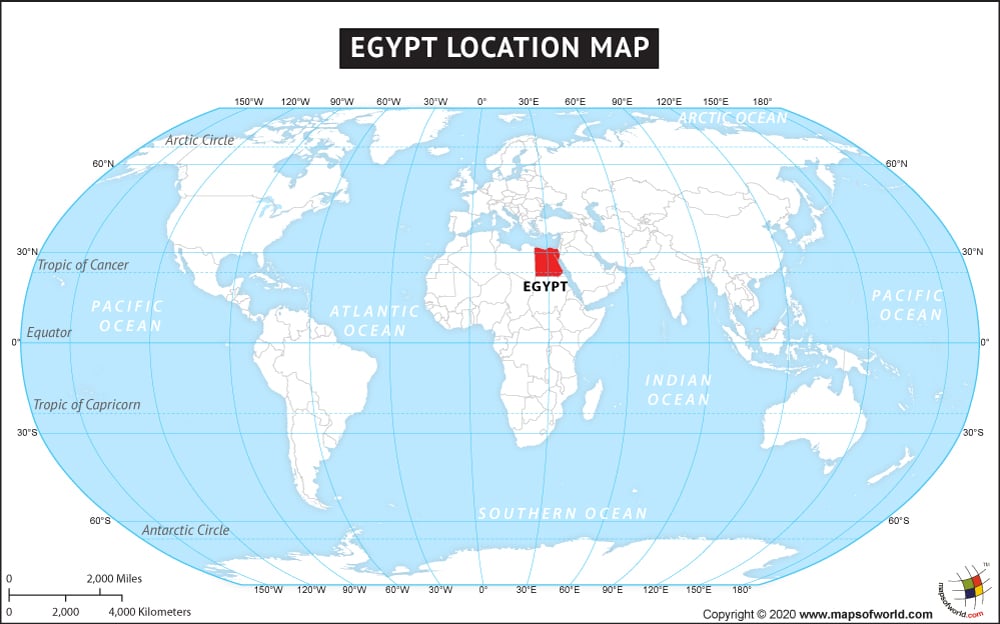 Description : Map showing the location of Egypt on the World map.
1FacebookTwitterPinterestEmail

Egypt shares its borders with the Gaza Strip and Israel, Sudan, and Libya, and has water boundaries along the Mediterranean Sea and the Red Sea. Egypt has an area of about 390,120.66 square miles, and a population of over 92 million people, making it the fifteenth most populous country in the world.

Egypt’s strategic location at the edges of Africa, Europe, and Asia has made it an important world power. Egypt is considered part of the Middle East as well as the Arab world, both culturally and politically. The latitude and longitude of Egypt are 28.8013° N, and 31.1711° E.

Egypt has been considered the cradle of civilization and during ancient times witnessed some extraordinary developments in the fields of writing and matters related to the central government, urbanization, agriculture, etc. Magnificent monuments such as the Great Sphinx and the Giza Necropolis and the ruins of Thebes, Memphis, and Valley of Kings among others depict the ancient glory of Egypt.

Today, Egypt is a regional as well as a middle power. The nation has a significant cultural and military influence in the regions of the Middle East and North Africa, as well as the Muslim world. The country’s economy has been increasing rapidly and today is one of the largest in the Middle East. Egypt is a member of some very reputed organizations such as the United Nations, Organization of Islamic Cooperation, Arab League, Non-Aligned Movement, and the African Union.

The neighboring countries of Egypt are: