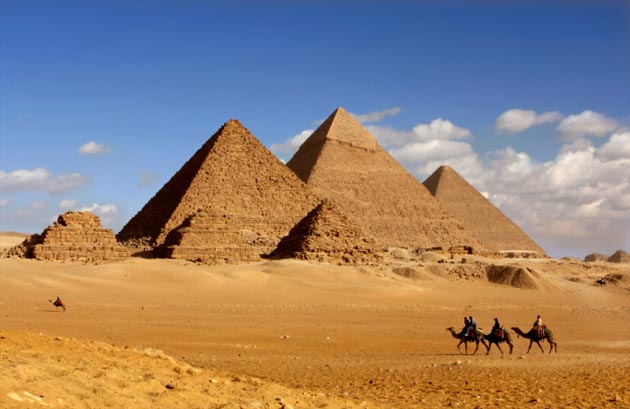 The Pyramids of Giza in Egypt

The Pyramids of Giza, situated near Al-Jizah, are a popular site in Egypt. This archeological site is located on the west bank of the Nile River and comprises the Great Sphinx guarding the Pyramids of Khufu (Gr. Cheops), Khafre (Gr. Chephren), and Menkaure (Gr. Mycerinus) – the pyramids of all of the prominent rulers from the 4th Dynasty (circa 2550 BC). In front of the pyramid, there is a temple ruin, from where the visitors click photographs of the pyramids.

The oldest pyramid of the group is called the Great Pyramid. It was named after Khufu, the Pharaoh who had perhaps commissioned the pyramid. He was the second king of the 4th Dynasty. The middle pyramid was built for Khafre. He was the fourth of the eight kings of the same dynasty. The last pyramid, also known as the Pyramid of Menkaure, was built for the fifth king of the dynasty. A satisfactory answer to how the pyramids were built still remains elusive. According to Herodotus, the Greek historian, around 100,000 men took 20 years to construct the Great Pyramid. However, archeologists in the late 20th century came close to a conclusion that it was built by only 20,000 workers. All three pyramids came under attack in ancient and medieval ages.

The Great Pyramid of Giza or Khufu Pyramid

The Pyramid of Khafre (Chephren), the second pyramid, is situated to the southwest of the Pyramid of Khufu. Although it appears to be taller than the Great Pyramid, it is actually smaller than that of Khufu and only appears taller because it stands on a higher ground. This pyramid was built by Khufu’s son Khafre.

The third pyramid, the Pyramid of Menkaure (Mycerinus), is the smallest of all the three and stands some 220 ft (67m) high. It was started by Khafre’s son Menkaure. The pyramids are notable for their incredible construction, using limestone and granite, which manifests a high degree of mathematical accuracy. Many theories about how the pyramids were constructed without the assistance of modern machines have been postulated. However, the mystery of the pyramids is yet to be solved.

In front of the Great Pyramid stands the Sphinx, a statue of a creature with the body of a lion and the head of a man. The Sphinx, which stands 20 meters (66 feet) high, and measures about 73.5 meters long, was probably carved over 4,500 years ago out of sandstone.

There is a disputed theory known as “The Orion Correlation Theory”, proposed by Robert Bauval, author of “The Orion Mystery”, which states that the disposition of the three pyramids of Giza was inspired from three stars in the Orion’s belt.

The Pyramids of Giza featuring the Ancient Egyptian architectural style promote tourism in Egypt. People travel from all over the world to see these wonderful monuments. You may ride a camel, or just walk around and see the pyramids. Do not miss the Pyramids of Giza sound and light show conducted at night. The guarding Sphinx is the venue for the night show conducted by the MISR Company for Sound, Light and Cinema. Book a tour to Egypt to enjoy the sight of these wonders.

Travel Tip: The sellers, hawkers, and touts are more aggressive at the pyramids. Stay in a group to safeguard yourself.

Nearby Tourist Attractions: While in Egypt, you may also plan to visit the Saqqara Pyramid Complex and Egyptian Museum located near the pyramids. 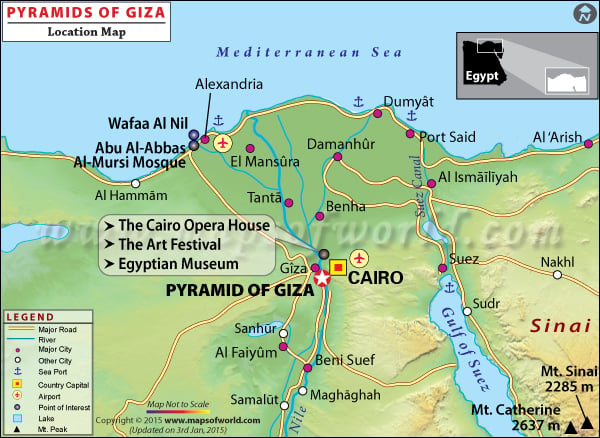 Location map of Pyramid of Giza

Q1.)What are the coordinates of the Pyramids of Giza?

Q2.)How far are the Pyramids of Giza from Cairo?

There are three suggested routes to reach the Pyramids:

Q3.)How far are the Pyramids of Giza from Sharm el-Sheikh?

The pyramids are at a distance of around 526.4 kilometers from Sharm el-Sheikh. It takes approximately 6 hours to reach the pyramids via road.

Hotels near Pyramids of Giza

Pyramids Inn Motel and Pyramids View Bed and Breakfast are some of the pocket-friendly accommodations that visitors can opt for. Mid-range hotels near the pyramids include Barcelo Cairo Pyramids, Mayorca Hotel, and Kanzy Hotel. To spend their days in Egypt in luxury, the tourists prefer Horizon Pyramids Hotel, Le Méridien Pyramids Hotel & Spa, and Grand Pyramids Hotel.

The best times to visit the Egypt pyramids are during winter or spring, to avoid the intense heat of the desert in summer.

Only 150 tickets are sold during morning and 150 after 1:00 pm for entry into the Pyramid of Khufu.

Update:  The Pyramid of Khafre is currently closed for the routine restoration work.

Update: Pyramid of Menkaure was reopened to the public after two-year renovation done by over 20 Egyptian and European conservators and professional archeologists.

Pyramid of Menkaure is currently closed.

Information about Pyramids of Giza

Q1.)What is inside the Pyramids of Giza?

There is a King’s Chamber and Queen’s Chamber inside the pyramids.

Q2.)Why is the Great Pyramid of Giza 30 feet shorter than its original size?

The loss of capstone and erosion made the Great Pyramid of Giza 30 feet shorter than its original size.

Q3.)How many sides does the Great Pyramid of Giza have?

It has four sides. The pyramid is constructed on a square platform and all four sides are inclined at a specific angle to meet at a point.

Q4.)Can you climb the Pyramids of Giza?

Initially, the highly dangerous activity of climbing the pyramids was a popular tourist activity. However, the government banned it recently and climbing pyramids is now considered a serious crime.