What are the popular places to visit in Alexandria? - Answers

Alexandria is a city founded by Alexander the Great, lorded over by Queen Cleopatra, appealed to writers and poets, and has endured – if not fostered – ancient kingdoms. Shorn of her glorious past, ‘The Pearl of the Mediterranean,’ rose from the ashes to reclaim its mantle. Today, even a fleeting glimpse of this ancient city through its dusty cosmopolitan crust appears to reprise the eminence of the Roman and Byzantine eras. With an ambiance that is more Mediterranean than Middle Eastern, Alexandria is like a fruit that constantly ripens.

It sits on the southern coast of the Mediterranean Sea in the north central Egypt. It is about 140 miles (225 km) northwest of Egypt’s capital – Cairo. 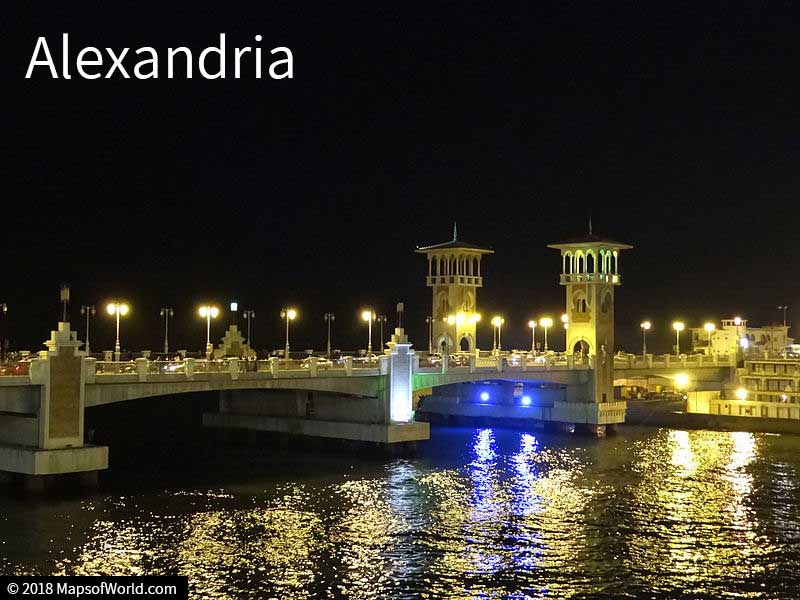 Places to Visit in Alexandria

Bibliotheca Alexandrina – Rekindling the brilliance of the most significant library of the ancient world – Library of Alexandria – it is a vast integrated cultural complex featuring libraries, museums, exhibition areas, and educational centers. Its striking facade, which faces the sea and is partially imbedded in the ground, resembles a sun dial. The main reading room lies beneath a 32-meter (105 feet) high and 160-m (525 feet) long glass-paneled roof. The Antiquities Museum displays a well-curated exhibition of artifacts from the Egyptian, Greek, Roman, and Byzantine eras. The Manuscript Museum houses ancient manuscripts and arguably the world’s largest collection of digital manuscripts.

Citadel of Qaitbay – Also known as Fort Qaitbey, is a late 15th century fortress built by Sultan Qaitbey on the former site of the legendary Lighthouse of Alexandria. Its roof offers fantastic views over the eastern harbor of the city. The fortress is situated on the eastern point of the Pharos Island. Its stone-walled chambers and impressive hallways offer a mesmerizing experience. It houses a Naval Museum that showcases artifacts from the Roman and Napoleonic sea battles.

Montaza Palace – Located in the east of the city center, the Palace was built as a hunting lodge in 1892 by Khedive Abbas Hilmi. Behind the palace complex are five beaches that provide a dose of tranquility. This 150-acre palace is a favorite picnic spot for locals. Its royal gardens feature palm trees, groomed lawns, and blossoming flowers. The Helnan Palestine Hotel is adjacent to the Palace.

Lighthouse of Alexandria – Standing to a height of 100 meters (330 ft), this lighthouse was built during 280–247 BC. Now a ruin, it was once the tallest building in the world. Before earthquakes damaged it, it was one of the Seven Wonders of the Ancient World.

Abu al-Abbas al-Mursi Mosque – This ancient Egyptian mosque is one of the most beautiful and historic mosques in the city. It is dedicated to Abul Abbas al-Mursi, a Murcian Andalusi Sufi saint from the 13th century. It also contains his tomb.

Catacombs of Kom el-Shoqafa – Often regarded as one of the Seven Wonders of the Middle Ages, this Roman necropolis dates back to the 2nd century. Discovered in 1900, the catacombs consist of three rock-hewn levels with a depth of nearly 100 feet. A spiral staircase descends to the main rotunda that has a series of tombs, statues, and pillars. Its name translates as “Mound of Shards.”

Pompey’s Pillar – Erected in 297 AD in honor of the Roman emperor Diocletian, it is a triumphal column made of polished red Aswan granite. With a height of almost 27 meters (88 feet) and a diameter of 2.7 meters (about 9 feet), it is one of the largest ancient monoliths in the world.

Things to Do in Alexandria

Corniche – It is a quite lively beachfront promenade decked with palaces, casinos, and hotels and graced with popular beaches like Maamoura, Sidi Bishr, and Ibrahimia. Saunter around the Stanley Bridge, linger in sumptuous cafes, enjoy water-skiing, diving, and snorkeling on the Maamoura Beach, or rent a bike to explore the beautiful colonial buildings.

Cleopatra’s Palace – Antirhodos Island, which sank due to an earthquake, was the site of the royal quarters of Cleopatra, an Egyptian ruler celebrated for her beauty. Lying at a depth of around 5 meters (16 feet) in the eastern harbor, the remains of palace like sphinx statues, monuments, carvings, and crowns of columns are visible with a guided dive. Vibrant coral reefs and teeming marine life add charm to this rewarding adventure.

Shopping – From high-end boutiques to open-air souks, there is a wealth of choice for shoppers. Souk El-Attarine, a labyrinth of narrow alleys, specializes in antiques, souvenirs, and traditional Egyptian artifacts like sheeshas, glass products, belly-dancing costumes, and spices. While Al-Nabi Daniel Street is a real treat for bookworms, San Stefano Grand Plaza Mall, city’s largest shopping mall, has everything from factory outlets to theaters.

Boat Rides – Come evening, set sail to watch the monumental white facade of Ras el-Tin Palace. Visitors can board ferries to nearby city of Damietta or take cruises all the way up to Limassol in Cyprus and Izmir in Turkey.

Kushari, Falafel, Ful Medames, and Mulukhiyah are the obligatory dishes to try while visiting the city. Samakmak, Kadoura, Farag Fish, Houda Gondol Restaurant, and Fish Market Restaurant are known for extraordinary fresh-off-the-boat seafood. While Lebanese cuisine is the focus of Byblos restaurant, Calithea – a Greek taverna – is a popular watering hole.

Alexandria witnesses moderate Mediterranean climate with mild winters and humid summers. The best time to visit is in spring (March-June) and fall (September-November).

By Air – Cairo International Airport (CAI), a major hub for domestic and international flights, is the gateway to Egypt. Moreover, Borg El Arab Airport (HBE), 25 miles southwest of Alexandria, serves the cities in the Nile Delta.

By Train – Sidi Gaber Railway Station is connected with trains, via Egyptian Railways, to Ramses Railway Station in Cairo. The best medium to get around the city is two tram lines: Tram Al Ramlh (blue) and Tram Al Madina (yellow).

By Road – Cairo and Alexandria are linked with two highways: the desert road and the agricultural road. International Coastal Road runs along the coast of the Mediterranean Sea. Car rental agencies, mini buses, and cabs are available for transportation in the city.