The red-white-black, three bands in the Flag of Egypt are placed horizontally to each other with the picture of Saladin. 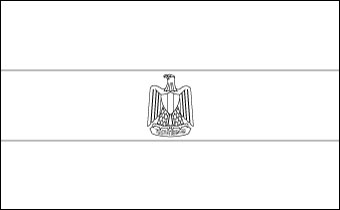 Download Picture of Egypt Flag Outline for kids to color

The Egyptian flag is a tricolor with three equal horizontal bands of red, white, and black, from top to bottom. The national emblem, the Eagle of Saladin, is placed in the center of the white band. The eagle is guarded by a shield and holds a scroll on which the name of the state (Arab Republic of Egypt) is etched in Arabic script. The Eagle of Saladin represents authority, beauty, and sovereignty. Salah al-Din Yusuf, known as Saladin, was the first Ayyubid Sultan to rule Egypt. The red band represents the period before the 1952 Revolution, which was marked by bloodshed and unrest. The white stripe symbolizes the revolution, which ended the monarchy and paved the way for Egypt’s transition into a republic. The white represents the largely bloodless nature of the Revolution. Black symbolizes Egypt’s past when the Egyptians were subjugated by the British authorities. The black band also represents the indomitable spirit of the people.

History of the flag of Egypt

Egypt adopted its national flag on October 4, 1984. The earlier flag of Egypt was green with a white crescent and three stars. The current design was adopted after the 1952 revolution that saw the end of monarchy in Egypt.