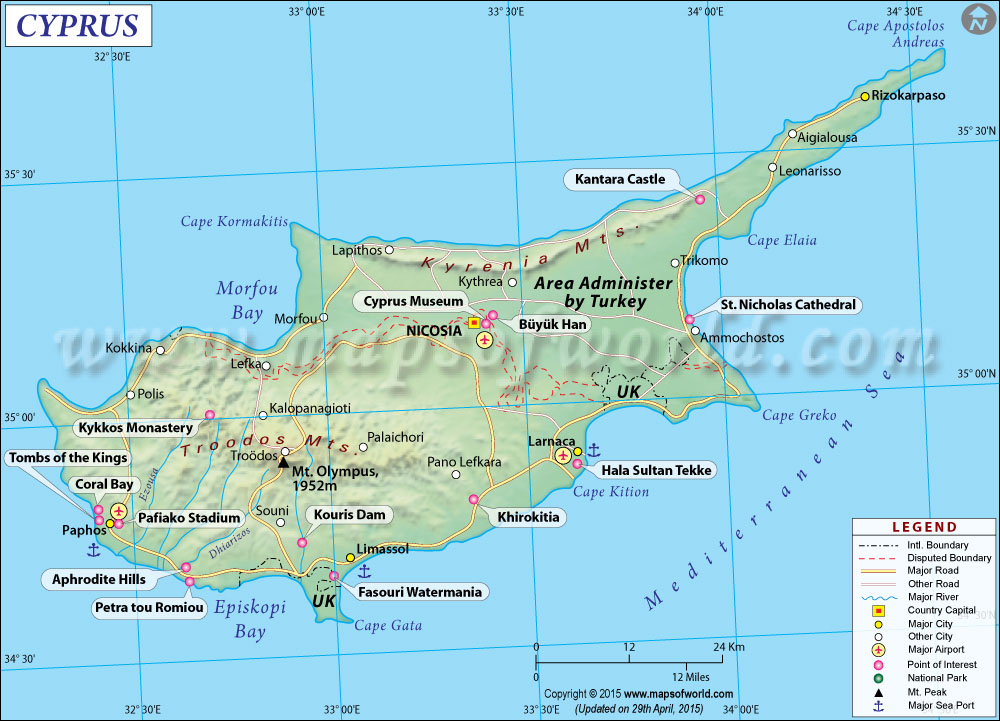 The Republic of Cyprus is a Eurasian island country located in the eastern Mediterranean Sea. It shares borders with Greece on the east, Israel on the south-east, Turkey on the south, Syria on the west, and Egypt on the north.

The earliest known human settlers of Cyprus is said to have resided on the island in as early as 10th millennium BC. Archaeological remains of the ancient village of Khirokitia also show evidence of early inhabitants during the Neolithic period.

The island’s strategic location between Western and Eastern countries exposed it to a large number of different major empires throughout its history. Among the major powers that occupied Cyprus were the Assyrians, the Egyptians, the Persians, and the Greek empire of Alexander the Great in 333 BC.

Subsequent empires that conquered the island include the Ptolemaic Egypt empire, and the Roman Empire. In 364 AD, Cyprus came under the rule of the Byzantine Empire, which lasted for 800 years. During the late 1500’s, the island was conquered by the Ottoman Empire, where it continued to rule Cyprus until 1878, when it was taken under the British administration. Formal annexation of the island was formally declared on November 5, 1914. By 1925, Cyprus became an official British colony.

In 1960, the Republic of Cyprus was declared independent from British rule but conflicts between the Cypriots and the Turkish population on the island led to several years of clashes. On 1975, the Turkish Cypriots proclaimed self rule over the northern territory of the island, but it is only recognized by Turkey. Today, the Republic of Cyprus and the rest of the world know it as “Occupied Cyprus.”

Cyprus is located in Western Asia or also considered as the Middle East. It has a strategic location that makes it in close proximity to Asia and Europe. The island located in the eastern part of the Mediterranean Sea is situated south of Turkey, west of Syria and Lebanon, east of Greece, and north of Egypt.

Cyprus is the 3rd biggest island in the Mediterranean, with 40% if its total area consisting of arable land. Its topography consists of 2 mountain ranges and a central lowland.

The Republic of Cyprus is a unitary presidential constitutional republic. The President is both Head of State and Head of Government, where the position is elected through popular vote and consists of a 5-year term.

The Judiciary acts separately and independently of the executive and the legislative bodies of the government.

The most popular Cyprus destination is that of the town of Paphos – a UNESCO World Heritage town that boasts of ancient tombs, fortresses, and palaces. This cultural capital is rich with cultural heritage and archaeological landscapes, making it not only a national treasure but an international gem, as well.

Limassol is Cyprus’ 2nd largest city and is home to the Port of Limassol – a transportation and trade hub in the country. A tourism and cultural hotspot, the city’s top attractions are the ruins of the Limassol Theater and the ancient remains of Kourion.

Ayia Napa is popular with younger tourists as this resort town is packed with a good number of bathing beaches and plenty of opportunities for water sports. Found on the far eastern southern coast of the island, this town is also famous for its museums, arts, culture, nightlife, and shopping.

For wreckage diving, Cyprus is home to one of the world’s top 10 wreck diving sites. The Zenobia was a ship that sunk off the coast of Larnaca in the 1980’s and has become a major tourist attraction for those who enjoy wreckage diving and exploration. The ship’s interiors still house carpets, vending machines, and fixtures that are rotting – making it a surreal and creepy experience.

Education is highly valued in Cyprus, with 7% of the country’s GDP allocated to the system. With a highly developed system of primary and secondary education, Cyprus is one of the top 3 highest spenders of education in the Union.

There are currently 3 public universities in Cyprus, and 5 private universities but several other institutions that offer college degrees and vocational programs exist all throughout the country.

Majority of its population also receive higher education from international institutions in Greece, Britain, Turkey, and other European and North American universities.

Cyprus is home to the world’s oldest named wine – the dessert wine called commandaria – which is said to have been made for 5000 years before the Knight Crusaders named it in the early 13th century. Cyprus has a very low crime rate, making it one of the safest countries in the world. Life expectancy for males is 76 and 80 years for Cypriot women.