Political map of Egypt illustrates the surrounding countries with international borders, 27 governorates boundaries with their capitals and the national capital. 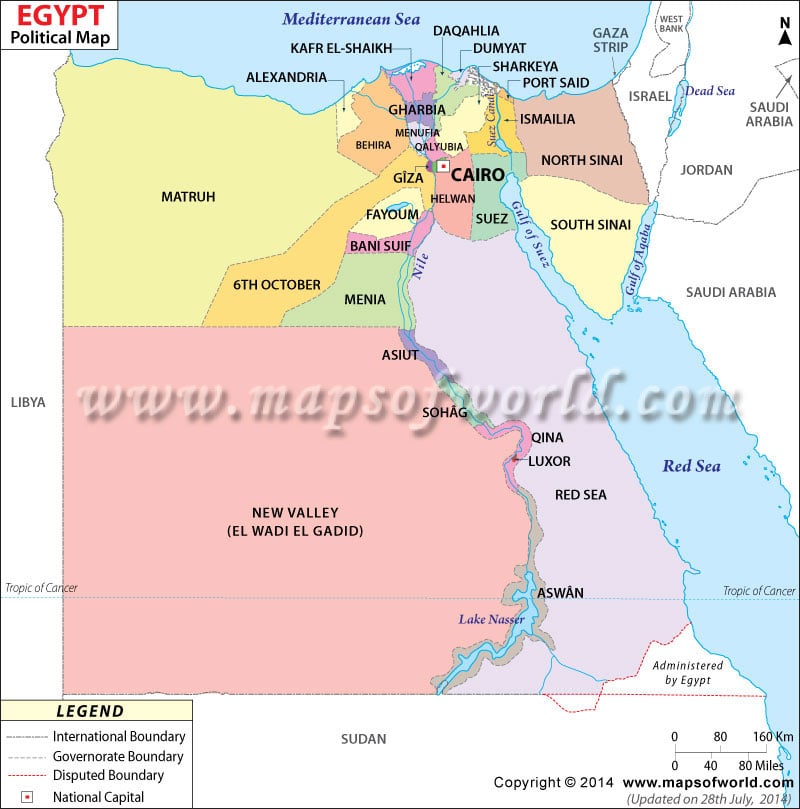 The Arab Republic of Egypt is a trans-continental country located in North Africa. It covers a total area of 387,048 square miles. According to the 2011 estimate, the population of the Republic is 81,015,887.

As shown in the political map of Egypt, the country is bordered by Sudan to the south, Libya to the west, and Gaza and Israel to the east. Egypt also shares borders with the Mediterranean Sea to the north and the Red Sea to the east.

The political map of Egypt marks the national capital, major cities, the major water bodies, and the international divisions of the country.

Cairo is the capital of Egypt and is marked on the map with a red dot enclosed in a square. With a population of 11.6 million, Cairo is the largest city in Africa and the Arab world. The city is a perfect representation of Egyptian culture. The beautiful masterpieces of art and architecture in the city have earned Cairo the nickname “The City of a Thousand Minarets.”

Egypt is divided into twenty-seven governorates that are further divided into regions. The regions are composed of many towns and villages.

Egypt is a presidential republic with the president being the head of state.  Early in 2011, the autocratic leader Hosni Mobarak who ruled the country for thirty years was overthrown. The leader himself stepped down after a series of protests rocked the nation. Since then, the Supreme Council of the Armed Forces had been ruling Egypt; the council was headed by Mohamed Hussein Tantawi until the inauguration of Mohamed Morsi as president on 30th June 2012.

The Egyptian economy is mainly driven by agriculture, media, petroleum exports, and tourism. In 2011, the gross domestic product (PPP) of Egypt was estimated at $508.265 billion, while the per capita stood at $6,361. Egypt has large deposits of coal, oil, natural gas, and hydropower, which makes the country a global producer of energy.