The Tibet Flag was introduced in the year of 1912 by the 13th Dalai Lama. In the Flag of Tibet, there is a glorious snow mountain in the center, which symbolizes the Land of Snow Mountains- the great nation of Tibet. 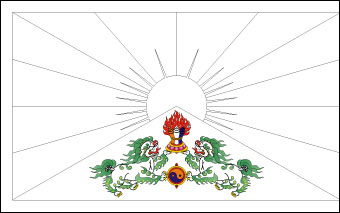 Download Picture of Tibet Flag Outline for kids to color

The Flag of Tibet exhibits six red rays of light radiating from a golden disk in the sky which stands for the six original tribes of Tibet, namely; the Se, Mu, Dong, Tong, Dru, and Ra.

The colored jewel symbolizes all the people of Tibet, who are enjoying equally the light of freedom, spiritual and material happiness, and prosperity. The Tibet flag displays two courageous snow lions representing temporal and spiritual power.

In the Tibet flag, the two lions are taking the wheel of the Ying Yang. The Ying Yang symbol represents spiritual energy. Upon Ying Yang, there are the 3 jewels of Buddhism, namely Buddha, the dharma, and the sangha, which means the law serving monks.

The 13th Dalai Lama, made the flag of Tibet in 1912, to unite the various army provinces of the region. The flag of Tibet has a rich symbolism to it. The six red bands represent the original ancestors of the people and are painted against the backdrop of the blue sky showing the protection of spiritual teachings. The white triangle in the lower part of the flag represents the Himalayan Mountains, the land of the people. The rising sun is the sign of equal enjoyment of privileges by the people of Tibet. The snow lions on the slopes of the mountain represent fearlessness and unified secular values. The three-colored jewel held by the lions represents the three spiritual teachings in which the people of Tibet take refuge. The rotating jewel held by the lions represents the correct ethical behavior of the people along with the correct codes of moral conduct as laid down by the Buddha. The yellow line that forms the perimeter of the flag stands for the spread of the pure gold-like teachings of the Buddha. The flag has a ratio of 2:3

Tibet tours are more than just a hike outside. The travel to Tibet is an inner journey with seeing and understanding the culture and the life of the people. One can see the great Tibet plateau. In Tibet, treks are the way to get across the rugged countryside. In Tibet, trips are organized to many Tibetan monasteries. Tibetan Buddhism provides soul food for travelers who come from far-off places to find peace in this land.

Tibetan prayer flags slowly fluttering in the wind and slow Tibetan music being played on traditional instruments such as the Tibetan singing bowl are signs of the peaceful Tibetan community. The people are spiritual and secular lot who try to be at peace with themselves and the world according to the teachings of the Buddha and the spiritual leadership of the Dalai Lama. The country has many artifacts such as Tibetan carpets, Tibet rugs, and Tibetan Thangka paintings.