The Vermont Flag was adopted officially on 1st June, 1923. According to the Vermont Flag history, the state was the 4th to gain admission into the Union. 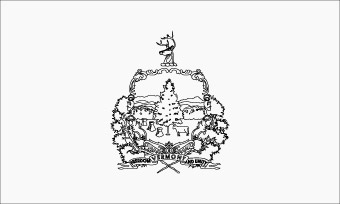 Download Picture of Blank Vermont Flag For Kids to Color

About Flag of Vermont

The first Vermont Flag was a militia flag designed in 1803. It was used by the Vermont soldiers at the times of the Spanish-American War, the American Civil War and during the commencement of the World War I.

In 1838 a new design was authorized for the Vermont Flag, which required to be coordinated with the pattern of the national flag.

The Vermont Flag is described as a field of blue, with the pictorial state coat of arms present in its center. The description of this flag are in accordance with the specifications mentioned by the statute.

The seal in the Vermont Flag depicts many symbolic images against a backdrop of the beautiful Green Mountains. The lofty pine tree is a conventional symbol of New England. The sheaves of wheat and the cow stand for the agriculture practiced in the state. On either sides of the image are 2 crossed branches of pine, which symbolize the sprigs of pine that the Vermont soldiers wore during the battle of Plattsburgh fought in 1814. Below the shield the state motto, “Freedom and Unity” and the name of the state are written on a red streamer. A stag’s head is present above the shield.

The Vermont Flag is a remarkable state symbol, which portrays various elements of the state through its seal.

Where is Vermont on the Map

Latitude and Longitude of Vermont