The 21 counties such as Sussex, Warren, Hunterdon and Mercer, which make up New Jersey, have been shown in the New Jersey County Map. As per the map the state is bordered by New York in north and Atlantic Ocean in east. 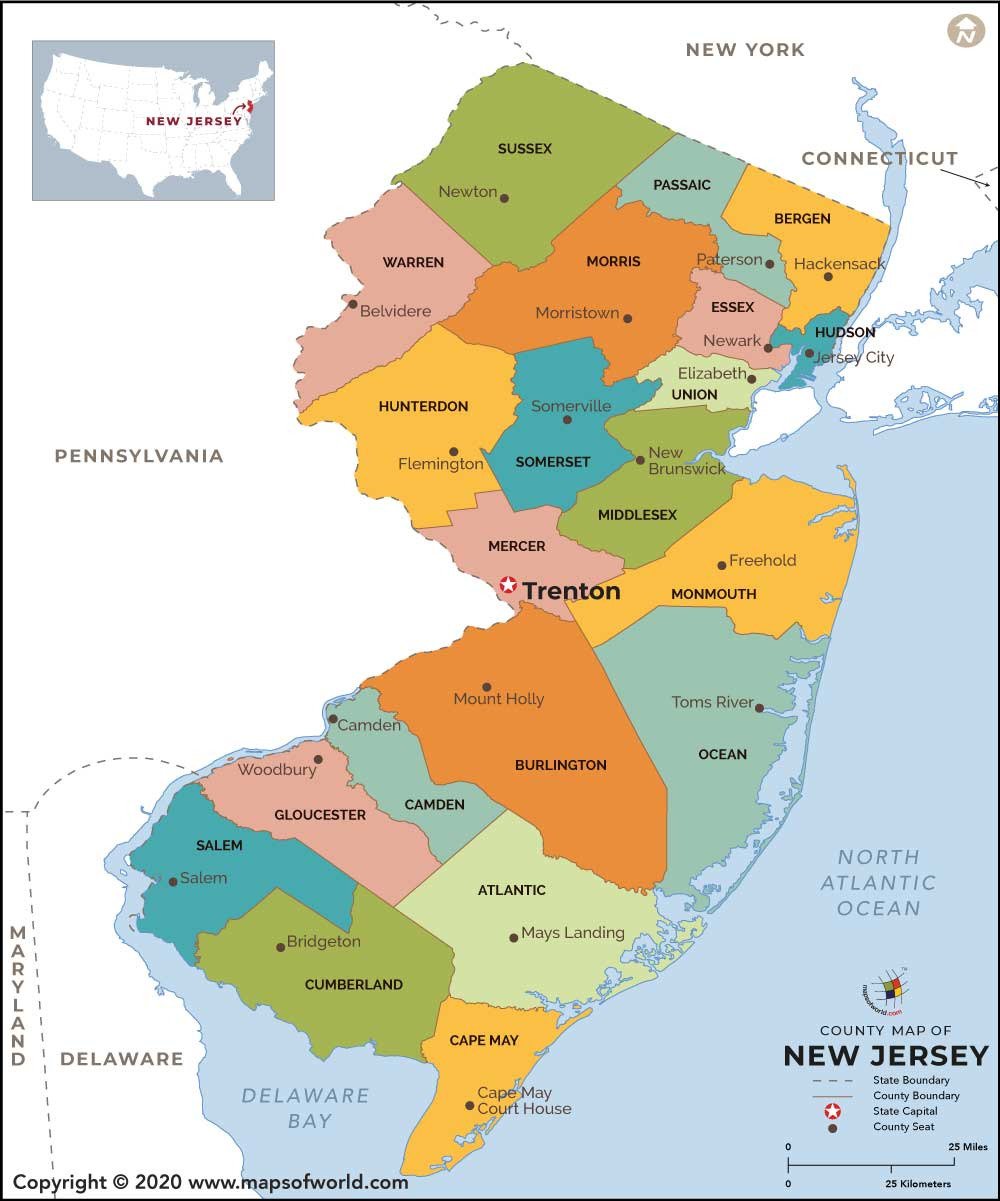 About the New Jersey Counties

The state of New Jersey is home to 21 counties. These counties can be further subdivided into 4 villages, 15 towns, 244 townships, 52 cities, 250 boroughs, and 565 municipalities. The counties are engaged in executing state mandated responsibilities, like the maintenance of certain roads, parks, and jails.

Between the years 1674 and 1702, the state was managed by two proprietors’ groups. These groups managed the state as two distinctive provinces, i.e. the West Jersey and the East Jersey. In 1675, East Jersey was split into Essex, Middlesex, Monmouth, and Bergen counties. On the other hand, West Jersey was split into the counties of Salem and Burlington in 1681. The Union County was the last addition to the list and was added to New Jersey in 1857.

The county names of New Jersey derive from various sources; chiefly most of the counties are named after the prominent names in England and well as famous leaders of the revolutionary and colonial era.

Some of the popular counties of New Jersey are:

A part of the New York Metropolitan Region, the county seat for Bergen County is Hackensack. The county, which was established in 1683, is home to approximately 200 arts and history galleries. Besides, it also carves a niche for its parkland, entertainment, and shopping destinations. With marvelous attractions, including Ski Campgaw, Bergen Equestrian Center, Bergen County Zoo, and USS Ling and Naval Museum, this certainly makes a great destination.

Located on the northeastern region of the United States, the county was formed in 1683 with Newark as its county seat. The county forms a part of the New York Metropolitan Region. The county got its name from Essex, another county in the East of England.

On a trip to the Essex County some of the must see attractions, include Montclair Art Museum, MDN Latin Dance Studio, Crane House and Museum, Branch Brook Park, and the Thomas Edison National Historical Park.

Located in the United States, Salem County forms a part of the Delaware Valley Region and was established in 1694 with county seat in Salem. With a rich heritage of historical events and places, a wide range of open spaces and natural resources, and an influential economical base, the county carves a niche for its quality of life. Located in the southwest side of New Jersey, this county is easily accessible from New York, Philadelphia, Washington, D.C., Wilmington, Baltimore, and Atlantic City.

For higher education, the Salem Community College makes for a good choice.

Besides, Burlington County College is a popular choice for those willing to come here for higher education.