The political map of Japan illustrates the surrounding countries with 47 prefecture boundaries with their capitals and the national capital. 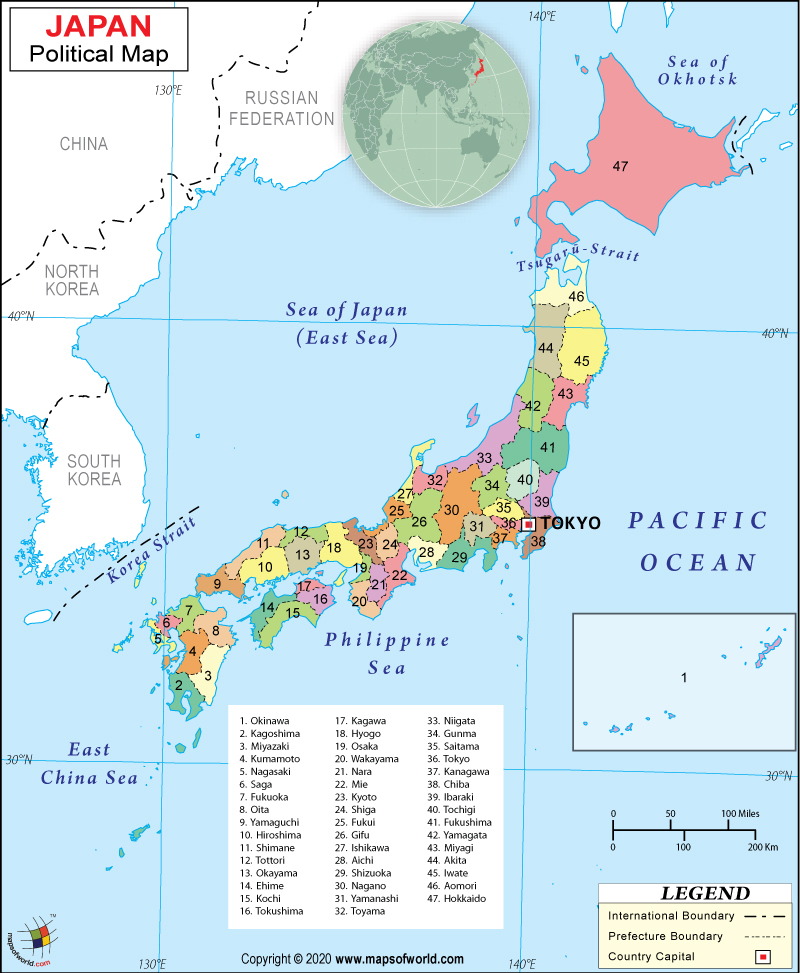 Japan is a nation of rich cultural heritage and many natural wonders. Referred to as ‘The Land Of The Rising Sun”, Japan has become the epicenter of international trade and finance with the technological advances made by the Japanese and by Japanese companies.

Situated in East Asia, Japan is an archipelago of 6,852 islands. It is surrounded by the North Pacific Ocean to the east, the Sea of Japan to the west, and the East China Sea, and the Philippine Sea to the south. China, North Korea, South Korea, and Russia share maritime boundaries with Japan. Japan’s Geographic Coordinates are 35.41⁰ N and 135.83⁰E.

Japan’s economic growth after World War II has been phenomenal. The shrewd government policies and dedicated work culture have propelled the country’s economy to great heights.

For three decades from the 1960s to the 1980s, Japan’s real economic growth had been remarkable. In the 1990s however, Japan faced an economic crisis. with government spending having been promptly cut and investments made, the economy recovered again in 2009-2010.

Unfortunately, Japan suffered again in 2011 due to a major earthquake and Tsunami, forcing Japan’s position down to the 4th largest economy in the world. Japan has a GDP (PPP) of $4.389 trillion (2011 est.) Japan’s agriculture sector is small and highly subsidized. Its major agricultural products are rice, fish, vegetables, dairy products, etc. Japan imports about 60% of its food and its industrial sector also heavily import its fuel and raw materials. PM Noda has currently proposed to open the service sector and agricultural sector to foreign competition to boost its export.

Japan has a constitutional monarchy and parliamentary government, with the Prime Minster as the head of the government. The role of the monarch is mainly ceremonial. After the death of the Meiji emperor in 1912 followed by the world wars, the reign of monarchs almost ended. By 1952, Japan had regained its full independence and in 1956 Liberal Democratic Party was formed. By this time constitutional monarchy was completely taken over by the parliamentary government. The Japanese government has two houses; the House of Representatives and the House of Councilors. Japan is divided into 47 prefectures, which are further divided into cities. Each prefecture has a governor and an assembly elected by the people. There are about eight to nine informal geographic regions in Japan, which do not serve any political purpose.

Tokyo: Tokyo is actually a prefecture and a metropolis with 23 municipal wards. It is also the capital of Japan and is the seat of the Japanese government. Considered the third pillar of the world economy after New York and London, Tokyo is also one of the most expensive cities in the world.

Yokohama:  It is the capital of Kanagawa prefecture and the second largest city in the country by population. It is also a major commercial hub of the country.

Osaka: This is the capital of Osaka Prefecture. This city is the third largest in the country and is also one of the command centers of Japan’s economy.

Kyoto: It is the capital of the Kyoto Prefecture. It is also one of the academic centers of the country. Kyoto has the second largest transportation station in the country.