The Japanese flag was officially adopted on February 27, 1870. The national flag of Japan is officially called Nisshoki, meaning sun-mark flag, and is also called Hinomaru which means "circle of the sun." The flag of Japan features a red circle on a white background. 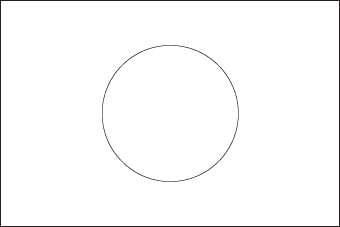 Download Picture of Blank Japan Flag For Kids to Color

Japan’s flag is a rectangle with a ratio of 2:3, although the original proportion of the flag was 7:10. The Japanese flag is white with a deep red disc in the center. Japan’s location to the east of Asia, from the direction the sun rises, helped Japan earn the nickname, “Land of the Rising Sun.” This nickname is reflected in the nation’s flag, the sun represented by the red disc.

Japan has been associated with the symbol of the sun since at least the seventh century, and although the exact origin of the flag is not known, most scholars believe it is related to the country’s nickname. Other theories include a representation of the sun goddess Amaterasu, from which Japan’s Imperial family is said to have descended. A sun flag was used by the shogun in the thirteenth century when the Japanese fought the invasion of the Mongolians.

The Hinomaru was made official in 1870 as a merchant flag, becoming the first national flag adopted in Japan from 1870 to 1885, when the flag became the de facto flag but not the legal flag. The flag’s use was heavily restricted during Japan’s occupation after World War II until 1947 when the restrictions began to be lifted.

In 1999, a law was passed to make the Hinomaru Japan’s official national flag.

The Japanese flag has had several variants, primarily versions that include rays of the sun. The Rising Sun Flag is used as the naval ensign and features an off-center sun disc surrounded by sixteen red rays of sunshine.

The Bangladesh flag is similar to Japan’s, with a red disc on a green background. The Bangladesh flag is different in that the disc sits to the left of the center, and originally had a gold map of the country on the disc. Palau’s flag also resembles Japan, though it is a yellow disc on a light blue background. Japan administered Palau from 1914 to 1944,  but its flag symbolizes the moon in the sky.