What are the popular places to visit in Kyoto? - Answers

When you think of Japan, you immediately picture two separate images. One of a bustling high-tech metropolis of neon lights and throngs of people, while the other of a quiet landscape with quaint little shrines and cherry trees rustling in the wind. The city of Kyoto falls into the latter category. It is a city that perfectly summarizes Japan’s union with the past and the future.

Kyoto is located near the center of the island of Honshu, Japan. 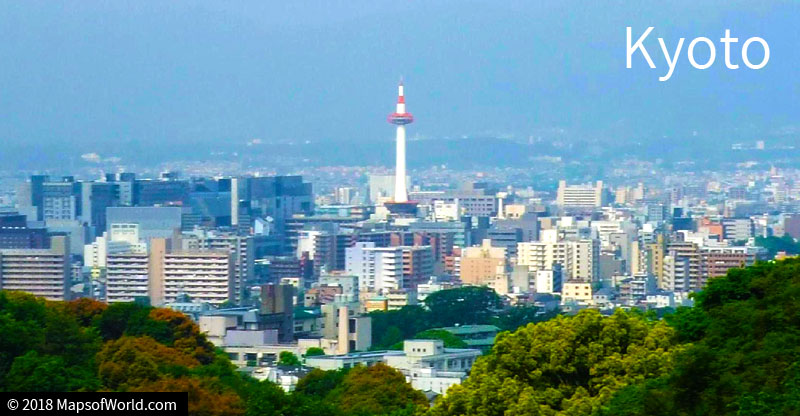 Places to Visit in Kyoto

Kinkaku-ji: The magnificent golden pavilion of Kinkaku-ji is one of the symbols of Kyoto. This beautiful structure’s main hall is covered in gold leaf and looks absolutely stunning, even more so when you see it reflected off the pond around the temple. The building was initially constructed in 1397 as a villa for Shōgun Ashikaga Yoshimitsu. It was destroyed in a fire many times but recently was burned down by a crazy monk in 1950. The current structure is a reconstruction that was finished in 1955.

Ginkaku-ji: Also known as the Silver Pavillion, the structure features beautiful gardens with raked sand gardens, pines and ponds. The structure was built in 1482 and like its contemporary Kinkaku-ji, it was used as a retirement villa for Shōgun Ashikaga Yoshimasa. It is often referred to as the Silver Pavilion because the original plan was to use silver for its construction. However, funds ran out before it could be covered in silver.

Ryōan-ji: The Zen temple of Ryōan-ji features one of the best examples of a Japanese rock garden or kare-sansui which means dry landscaping. No one knows who designed the garden or what the 15 large stones set amongst a sea of smaller stones even mean. However, like all great works of art, this structure is open to interpretation. Tourists are encouraged to try and create their own meaning and while they are at it, they find out a bit more about themselves.

Gion: Travel back in time with a trip to the Gion District. The old Japanese architecture is still prevalent – along with old traditions and customs – the most prevalent of which are teahouses and restaurants. Gion is also the only Geisha district left in Japan, so every now and then tourist can catch a glimpse of a Geisha, scurrying about in their colorful and exquisite kimonos. Here, tourists can also check out the Minami-za theatre for a taste of traditional Japanese entertainment.

Arashiyama Bamboo Grove: The beautiful and majestic bamboo forests at Arashiyama look like they are from a different world altogether. Here, massive bamboo stalks reach for the sky and the whole forest is so dense that it looks like it goes on for eternity. It is a very popular sight to take some truly surreal pictures, but no picture can really do justice to its beauty.

Fushimi Inari-Taisha: The shrine has to be entered by walking through a seemingly never-ending series of Torii, or shrine gates. The trail up the mountain is about 2.5 miles long and along the way tourists come across a number of smaller sub-shrines. The main shrine consists of a complex of five shrines dedicated to the gods of rice and sake (an alcoholic drink made from fermented rice).

Nishiki Market: If you have a particular interest in food, then a trip to the Nishiki Market is a must. Here, tourist can find all sorts of ingredients and foodstuffs that are common in Japanese and Kyoto cooking. Some of the stores also offer free samples while others have complete restaurants inside. Inside the market, tourists can also find Aritsugu, one of the oldest and finest knife makers in Japan.

Kyoto Imperial Palace: The Kyoto Imperial Palace, also known as Gosho, used to be the official residence of the Emperor of Japan. The structure looks absolutely magnificent and while the Gosho itself cannot be visited without prior permission, the surrounding parks are free and open for tourists as well as locals to enjoy.

Kiyomizu-dera: Founded in 780, this temple is one of the most celebrated ones in Kyoto. It became a UNESCO world heritage site in 1994. Its biggest highlight is a wooden stage that extends out from the main hall, about 40 feet above the hillside. One can get a nice view of Kyoto from here.

Katsura Imperial Villa: It is considered one of the important cultural treasures of Japan and it’s easy to see why. Its gardens are regarded as Japanese gardening’s masterpiece and its buildings are considered as a great achievement of Japanese architecture. It also houses a strolling garden, tea houses, and a drawing room, called ‘shoin.’

The Daiwa Roynet Hotel Kyoto Shijo Karasuma and the Mitsui Garden Hotel Kyoto Shijo offer rooms at reasonably budget prices in Kyoto. Mid-range accommodations are offered by the Kyoto Hotel Okura and the Arashiyama Benkei. Travelers who can splurge should check out The Ritz-Carlton Kyoto.

Best time to visit Kyoto
The best time to visit the city is between March to May and between September and November. It is during these times that tourists can enjoy the cherry blossoms and the colorful fall foliage.

By Air: Kainsai International Airport is the closest airport to Kyoto and is about 63 miles away by road. Driving the distance will take about 1.5 hours.

By Rail: Kyoto Station is a major station in Japan and is also a stop for the Shinkansen bullet train which connects it to many important cities in the region such as Tokyo.

By Road: The road network in Japan is quite extensive. There are also a number of buses that ply between Toyko and Kyoto.

Is there any set tip that one should offer in Kyoto?

Tipping is not accepted in the whole of Japan. This is true for everything ranging from restaurants to taxis.

Are there any rules when entering a building?

Whenever someone enters a room with a carpet, especially a home, it is customary to take off footwear outside the building.