The NC County Map provides comprehensive and important information on the 100 counties that make up North California. The history of the North California counties stretches from 1668 to 1911. 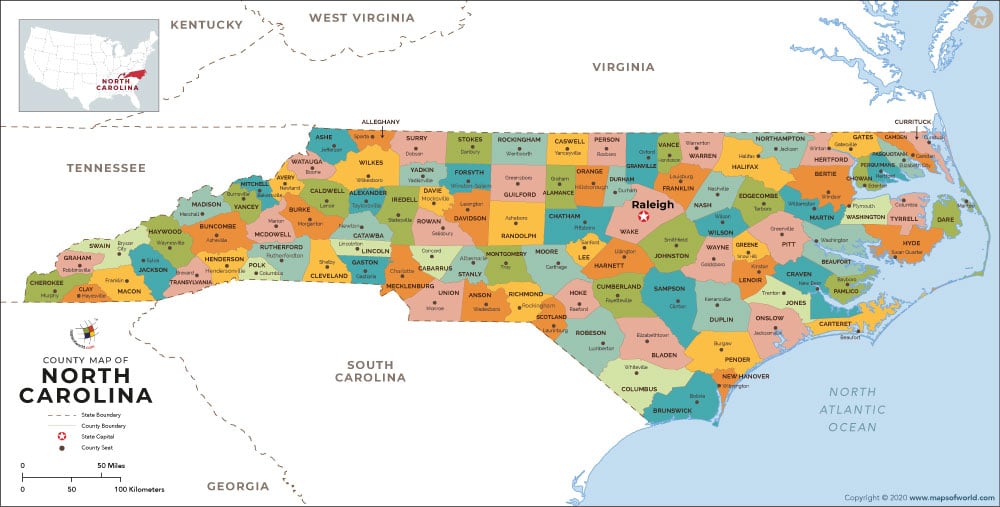 North Carolina is a state located in the southeastern part of the US. It is also known as ‘Old North State’ and ‘Tar Heel State.’

Some prominent Counties of North Carolina

North Carolina is divided into 100 counties. The capital of the state is Raleigh, the largest city is Charlotte and the total population is 9,848,060. Avery County, Chowan County, Burke County, Caldwell County, Craven County, Montgomery County, Orange County, Wake County, and Yancey County are the major counties of the state.

Founded in 1911, Avery County of North Carolina, whose county seat is Newland, is the newest county in the state. The area of the county is very rural and mountainous since the entire county is situated within the Appalachian Mountains. The Pisgah National Forest in Avery is a delight to visit for all the nature lovers. The Big Yellow Mountain and the Little Yellow Mountain are a must-visit in the Forest. The county also has Linville Falls, Dugger Creek Falls and Toms Creek Falls as some of the famous waterfalls. All waterfalls fall under the Linville Falls Recreation Area. While visiting this area,visitors should keep in mind that swimming is prohibited here. Grandfather Mountain, Grandfather Gap and Linn Cove Viaduct are others notable places of the county.

Burke County is another prominent county of North Carolina. The county seat is Morganton which is also the largest city of Burke county. Founded in 1777, the county encompasses an area of 515 sq. miles. Lake James and the State Park, Linville Falls, McGalliard Falls, Hickory Aviation Museum, Bell Nicho Winery, Linville Caverns, Brown Mountain Lights, Waldensian Heritage Museums, and NC Birding Trail, are some places to visit in the county.

Chowan County is the smallest county in the state with the total area of 233 square miles. The county seat of Chowan is Edenton, which has also been recognized by the website Forbes.com as one of the prettiest cities in US. The place offers innumerable recreational opportunities to visitors. The Chowan County Courthouse, Cupola House, Roanoke River Lighthouse and Maritime Underground Railroad are some of the famous historic sites of the county.Whereas,Bennett’s Millpond, Dilliard’s Millpond, Edenton Town Harbor, Addling Trails, Taylor Movie Theater, and Wharf Landing Marina, are some of the recreational sites of the Chowan County.

Caldwell County was formed from parts of Wilkes County and Burke County. The Caldwell County has an area of 474 square miles, has a population of 83,029 people.Its county seat is Lenoir, which is known for various attractions such as, Caldwell Historical Museum, Fort Defiance, Morning Song Gallery, Flat Top, Manor Museum, Wilson Creek and Blowing Rock.

Founded in 1881, Durham County was formed from parts of Wake County and Orange County. The county seat of Durham is the Durham city. A very little portion of the capital of state, Raleigh, lies in the Durham County. The Duke Lemur Center situated in the Duke University is a sanctuary for the endangered and rare species of ProsimianPrimates. The Carolina Theatre is another delightful place to visit for all the arts and theater lovers. Stagville, Durham Central Park, Bennett Place, LakeMichie and Duke Chapel are other prominent attractions of the county.

Mecklenburg County, with a population of 990,977 people, is the most populated county of the state. Charlotte is the county seat, and is also the largest city of North Carolina. There are various breathtaking attractions in the Mecklenburg County and Charlotte. The Elevation Church is a diverse multi-site church in Charlotte and is also one of the fastest growing churches in US. The Carowinds is a huge amusement park for the children as well as adults. The Carowinds also owns Boomerang Bay, awater park in the same premises,and both have a commonentry fee.Tremont Music Hall is another place to be in the county. The music venue has been operating since 1995 is one of the leading venues for hosting rock/alternative/metal band shows in the county. National Whitewater Center, Billy Graham Library, Discovery Place, Westin Charlotte, Charlotte Convention Center, Ovens Auditorium, Carolinas Aviation Museum, Calvary Church, Quail Hollow Club, and Ray’s Splash Planet, are other attractions of the county.

Wake County is the second most populated county of North Carolina with a population of 900,993. The county seat of Wake is Raleigh, which is also the capital of the state. Most part of the city lies in the Wake County, however a very small portion of Raleigh also lies in the Durham County. The Ackland Art Museum in the Wake county features exhibits of more than 15,000 historical objectssuch as, European sculpture and paintings, Asian art objects and various traditional NC pottery objects. Similarly, the Alexander Dickson House is home to many traditional 18th and 19th century artifacts. The Carnivore Preservation Trust is a huge compound which is inhabited by more than 140 different animals including several endangered species.

The county also has the IMAX Theater/Exploris,an interactive museum which features a huge screen offering its visitors to explore various destinations of the world. The Marbles Kids Museum, a non-profit kid’s museum, provides for a unique interactive experience for developing children’s creative thinking abilities.

Where is North Carolina?