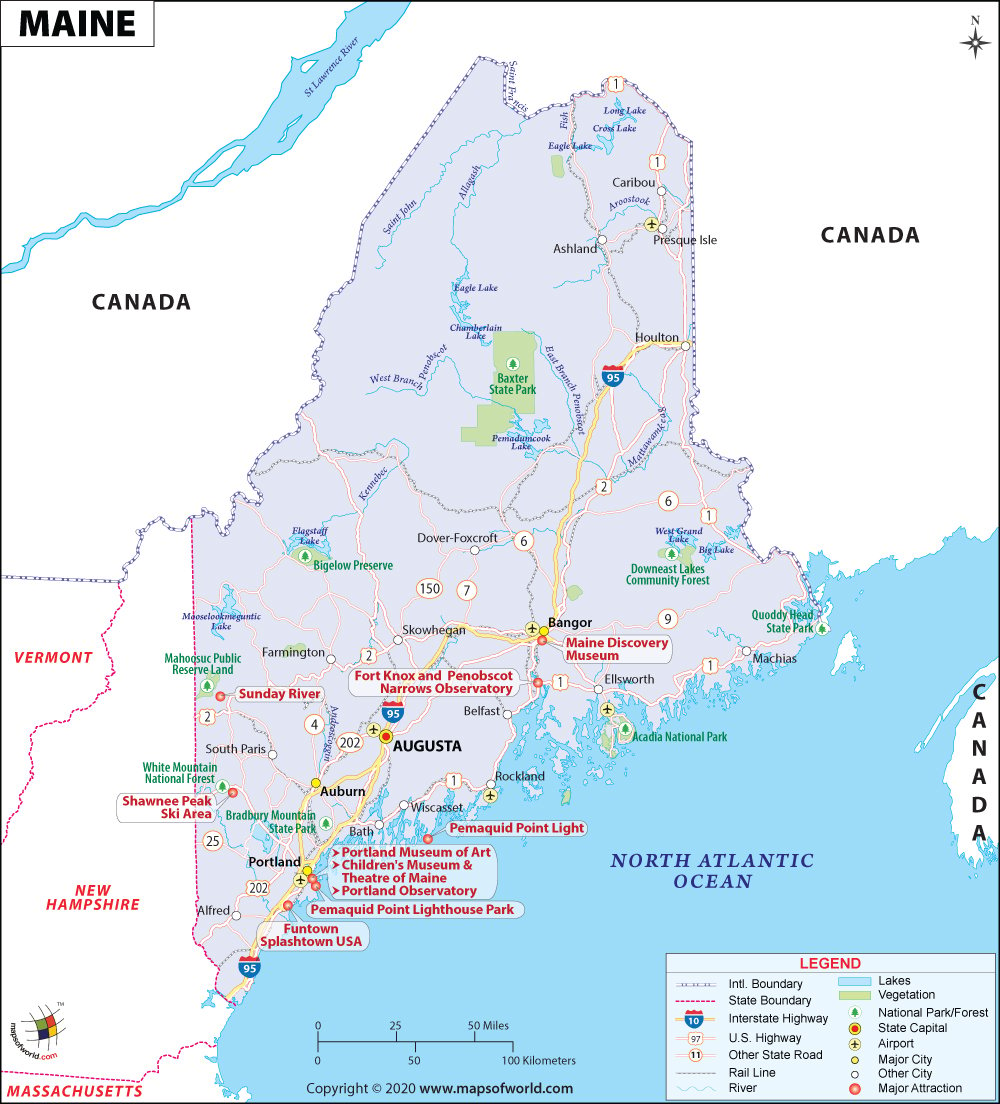 Explore this Maine Map to learn about the twenty-third state of Maine in the USA. Update yourself about the exact geographical location of Maine. Look at its geography, history, significant towns and cities, capital city’s location, largest city, time zones, area/zip codes, flag, the emblem, various terrains in the state, hiking and backpacking trails, Frequently Asked Questions (FAQs), etc.

Maine is situated in the northeastern part of the USA. The capital is Augusta. The city of Portland, farther south, is the largest in the state. Maine became the 23rd state of the USA on March 15, 1820, a part of Massachusetts earlier. Maine is also called “The Pine Tree State” or, most popularly, “Vacationland.” The Motto of the state is “Dirigo,” whose meaning in Latin can be either “I lead,” “I guide,” or “I direct.” Almost 92% of the state’s inhabitants speak English, and nearly 5% of the state’s total population speaks French.

Check key facts about Maine to get knowledge about this twenty-third US state.

Civil War veterans wanted the Maine flag to resemble the battle flags from the war. They wanted the state flag to be primarily blue, representing the Union and contrasting the Red of the Confederacy.

Maine has two state flags. Besides the commonly used blue flag, Maine has a white Merchant and Marine flag. It is meant to be flown by Maine-flagged ships. This flag dates back to 1939 and contains a green pine tree.

The Great Seal of the State of Maine is the official emblem of Maine. The legislature adopted the language that governs the seal’s design on June 9, 1820. The description and explanation of the seal’s design are credited to Waldoboro’s Colonel Isaac G. Reed.

Maine Location Map shows the exact location of the US state of Maine on the United States Map. This map showcases the US state boundaries, neighboring countries, and oceans. Maine is located in the country’s northeastern part. It is also the northernmost state out of the six new New England States.

This state shares its borders with:

Maine’s exact geographical location is 42° 58′ N to 47° 28′ N Latitude and 66° 57′ W to 71° 5′ W Longitude. Check the Latitude and Longitude Map Of Maine to learn about the precise location of this state in the United States of America.

The earliest Europeans who visited the current Maine areas are believed to be the Vikings. Leif Ericson and 30 Viking sailors were thought to visit this land around 500 years before Columbus “discovered” America. They also tried to establish a settlement here.

It was in 1498 that an Italian sailor employed by England’s King Henry VII reached and explored the Maine coast. However, the first-ever settlement was settled in 1607 at Popham by the Plymouth Company. In 1607 another settlement was established in Virginia’s Jamestown. However, this settlement didn’t last long due to the extreme cold temperature. That’s why Jamestown is still considered the first permanent settlement in America.

Throughout the early 18th century, many wars took place between the French and the English troops on the question of ownership over Maine. The French fort capture at Nova Scotia’s Louisburg during the French and Indian Wars in 1745 was a significant military development.

All French claims to this territory ended in 1763 when the Treaty of Paris was signed. Maine’s population of settlers started to grow when the threats from the Native Indians lessened in the mid-1700s. From 1743 to 1763, the people of this place jumped from 12,000 to 24,000. By the century-end, the people of settlers in this area jumped to over 150,000.

During the American Civil War, around 73,000 men joined the Union forces, out of which 10% died during the conflict. Joshua L. Chamberlain and Oliver Otis Howard were the two war heroes who led the Union troops to victory in Maine.

More than four hundred islands can be found off Maine’s coastal area. The largest of these islands is the Mount Desert (which forms Cadillac Mountain’s base). Mount Desert’s elevation is 1,530 feet (466.3 m) above sea level.

Tidal creeks and salt marshes characterize the Coastal Lowlands to the west of the beaches and the coast.

From this physical map of Maine, you can learn more about the mountain range, rivers, deserts, plains, the state capital, state boundary, and neighboring country.

Maine has 16 counties. Aroostook County is the largest county, and Sagadahoc County is the smallest county. Check the Maine County Map to learn more about the location and boundaries of different counties in the state.

There is only one area code in the US State of Maine. It is:

The Maine Area Codes Map will help you locate a particular area code. You can also use it to learn more about the area code boundary, county and state boundaries, and state capital.

Learn about the state’s significant places from this Maine cities map. It also helps you know the exact location of the state capital, other cities, state boundaries, neighboring states and oceans, and many more. Maine’s most prominent cities are Portland, Auburn, South Portland, Bangor, Lewiston, and many more.

Check out the National Parks in Maine Map to get a clear idea about the locations of different national parks, monuments, preserves, etc.

The winters in Maine are generally cold and freezing. Prolonged cold spells are rare. Throughout winter, it remains partly cloudy. The average temperature in the winter season ranges from less than 15 °F (-9.4 °C) in the northern and interior parts of Maine to 25 °F (-3.9 °C) in the far south.

FAQ #2: What Is The Capital Of Maine?

Ans: Augusta is the capital of Maine.

FAQ #5: Who Is The Governor Of Maine?

FAQ #6: What Is The Population Of Maine?

Ans: Maine’s population in 2022 is estimated to be 1.38 million, making it the thirty-eighth populous state in the USA.

FAQ #7: What Is The State Bird Of Maine?

FAQ #8: When Did Maine Become A State?

FAQ #9: How Many Counties Are In Maine?

Ans: There are 16 counties in Maine.

FAQ #10: What is the Largest College in Maine?

Ans: The University of Maine is the largest in Maine.