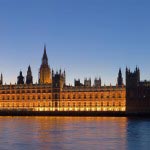 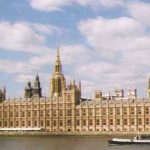 The place where the two houses of Parliament in the UK, the House of Commons and the House of Lords, meet – the Palace of Westminster – is an iconic structure which represents the oldest democracy of the world. This historic building of the ‘House of Parliament’ is a unique display of Gothic style architecture and is the center of political activities in the UK.

The site of the Palace of Westminster is of great importance since the Middle Ages. Unfortunately, the 700-year-old historic building was destroyed in a massive fire in 1834, and the present structure of the House of Parliament was rebuilt between 1840 and 1870. Architect Sir Charles Barry designed the new Palace in Gothic style; he included parts of the old structure, the Westminster Hall and the St. Stephens Chapel which survived the fire. During the Second World War, some parts of the Palace were severely damaged due to bombing and had to be rebuilt.

The Palace and its towers are fantastic specimens of the Victorian era and Gothic architecture. The Palace of Westminster has a classical Perpendicular Gothic design. The Palace has three main towers:

The Victoria Tower which is the tallest tower of the Palace is named after Queen Victoria. This tower is approximately 321 feet tall. The entrance of this tower is arched and the interiors have detailed carvings. The tower is home to life- size statues of Queen Victoria, the patron saints of Ireland, Scotland, Wales and England along with the figures of Jesus and Mary.

The Central Tower has an octagonal Gothic vaul. Dr. David Boswell Reid proposed a plan to make a great central chimney for ventilation of smoke during fires. Thus the Central Tower was built. Although the Central Tower failed to fulfill its purpose, yet it adds up to the structural design of the building.

The Clock Tower, also popularly known as Big Ben has a big four-faced clock designed by Augustus Pugin. The Big Ben is one of the famous landmarks of London for housing the largest clock in Great Britain. This Clock shows accurate time and has rarely failed since its installation.

Besides, the Palace also includes the chambers of Lords and Commons. Both the chambers are open to public to attend debates when the parliament is in session. Public can attend the debates from the public galleries, which are open from Monday to Thursday and occasionally on Fridays, when the houses are in session. Prior admission passes are required to enter the Parliament.

Besides these, the smaller gardens such as the Victoria garden which surrounds the palace, are also open to the public and are visited by tourists.

The Palace has designated rules and traditions, which are required to be followed by the visitors to maintain the decorum of the Palace. 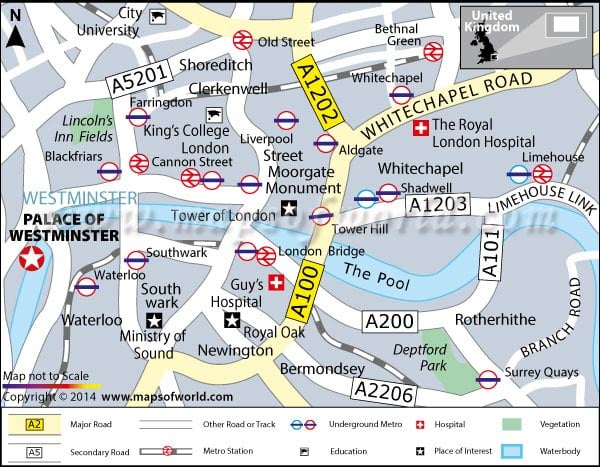 Location Map of Palace Of Westminster

Facts about Palace of Westminster

Where is the Palace of Westminster ?

The Palace of Westminster has been built next to the River Thames, in the City of Westminster in central London, UK. Its central location in the city makes the Palace or House of Parliament a prominent landmark. London Heliport at Battersea and Heathrow International Airport are the nearest airports. Once in London, you can take a bus, taxi, private car, or even the tube to reach the Westminster Palace. If you intend to take the mainline train, the nearest station is London Waterloo; the Palace is located at 15-minutes walk from the station. One can also reach the Westminster Millennium Pier by boat; the Palace is at a walking distance from the pier.

Best time to visit the Palace of Westminster

You can visit the Palace of Westminster all year round. Just make sure to book your tour in advance to avoid any hassles. The best time to visit the House of Parliament is during the summer recess when the Parliament is not in session. At this time you may take a complete tour of the building. Passes are required to enter when the parliament is in session.

The visiting hours for most of the Saturdays are from 9:15 am to 4:30 pm. For Tuesday to Friday, currently the tours are being conducted from 9: 15 am to 4:30 pm. The timings are subjected to change as per the decision of the officials at the Palace. It is recommended to check for the current applicable timings whenever you are planning the tour.

The Palace of Westminster offers several guided tours to the UK natives and overseas visitors. You need to book tickets online at their official website.

More about the Palace of Westminster