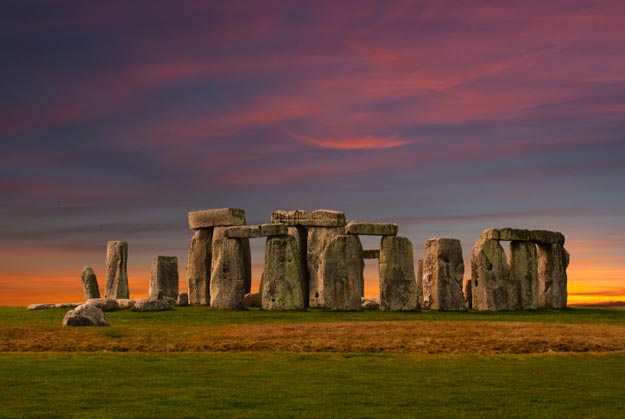 The Stonehenge Monument in England

Stonehenge in Wiltshire, England, is a prehistoric monument that may have served as a burial ground for Neolithic and Bronze Age societies. A circular arrangement of standing stone pillars, many of which are topped with a horizontal stone slab, the architecture of Stonehenge is a marvel in itself, which has caused scholars to study how the structure was built.

The stones are arranged in the post-and-lintel formation. Five trilithons make up the inner horse-shoe shape. The outer ring of the Neolithic monument has 30 lintel stones joined with the tongue and groove joint woodworking technique. The biggest stones, also called sarsens, are believed to have been brought from Marlborough Down. The small stones, or the bluestones are believed to have been quarried from about 200 km away in Pembroke County, Wales.

A huge heel stone lies in front of the northeast entry. It is an enormous unshaped boulder. The Slaughter Stone is also located close to this entrance. It seems to be a fallen monolith that extends into the river.

The questions such as who were the people behind the construction of Stonehenge or why was the monument erected, are still a mystery. Yet, the Stonehenge was decoded to some extent, by Prof. Mike Parker Pearson, University of Sheffield. While excavating in a farmer’s field, located about less than 2 miles of the Stonehenge, the team of Prof. Pearson comprising of several archaeologists, found out the remains of a big prehistoric village. In a National Geographic Channel documentary, he has tried to uncover some secrets of the monument, which are discussed as under:

Prof. Pearson also believes that the design of the Stonehenge hints that the monument occupied a central position in the ceremonial landscape. It was used to house the spirits of the dead. It may have associations with another mysterious monument. A grand avenue connected the Stonehenge to the River Avon.

Among other theories, Prof. Pearson proposes that several tribes gathered from Southern Britain during the summer solstice to thank their ancestors to bring back life to the land, animals, and themselves. During the winter solstice, they would probably again gather at the site to perform the ceremony for the dead.

Around 240 human remains were discovered at the site. The carbon dating technique unveiled that the remains belonged to the 5th century. As the number of remains was less, Prof. Pearson proposed that these may have been the remains of the ruling dynasty and the remains of all other people were deposited somewhere else. Probably, the river symbolized the beginning of another journey, the remains of the dead were put into it.

About two-and-a-half km away to the North, lies one of the sites that was once believed to be the race track for the Roman Chariots. It predates the Stonehenge (was constructed about 500 years before the monument). It is believed to have connections with the monument. It may have been used as a dividing line. The sacred zone with circular Henge, surrounded by a ditch and a bank, lies beyond this line.

This invaluable monument that used to be an active place in the history, is in ruins today. Several restorations performed on the Stonehenge between 1901 and 1964 have made it possible for the monument to sustain till date. However, lately, vandalism of Stonehenge emerged as one of the threats to the site.

The pre-historic things and monuments are a mystery. Another mysterious Stonehenge was found by a squad of underwater archeologists under Lake Michigan’s Grand Traverse Bay.

The Crown owns this legally protected stone monument, but it is managed by English Heritage. The National Trust owns the skirting land. This fascinating monument is a must visit place.

A news website reported recently that the discovery of warm springs just a few steps away from the monument could help the scientists and archaeologists solve the mystery behind Stonehenge. This monument may have served as a home to Mesolithic cavemen. The location near the pools suggest that wildlife would have been abundant here, thereby providing food for them.

You must also visit the nearby attractions such as Woodhenge, Salisbury St. Thomas Beckett Church, and Salisbury Cathedral on your Stonehenge tour.

You may like to check: Tours to Stonehenge, UK

Stonehenge is located on Salisbury Plain in Wiltshire County, England. The monument is situated on a large field, about 13 kilometers (8 miles) north of the city of Salisbury, and 3.2 kilometers (2 miles) west of Amesbury. Visitors to Stonehenge usually drive or visit by tour bus, because the monument is located far from major cities.

It’s best to visit Stonehenge when the weather is mild, not snowy or rainy, but warm sunny days are a rarity there. Summer solstice celebrations, though attendance is limited, allow for a unique method of experiencing Stonehenge. The attendees gather before sunrise to bring in the new season amid the stones.

The opening timings vary. The opening time is  from 9:30 am to 7:00 pm. For updated times visit the English Heritage Website : http://www.english-heritage.org.uk/

How tall are the stones of the monument?
The biggest of the rocks of the Stonehenge (known as sarsens) rise up to 30 feet (9 meters) height.

What is the average weight of the tallest stone of the Stonehenge?
About 25 tons (22.6 metric tons).

Who protects the Stonehenge?
As it is a UNESCO Site, it is legally protected by the UNESCO.

How can you protect Stonehenge?
Many of the stones of the monument have been lost. Some of the ones that are still standing are under the threat of getting crumbled down or weathered down. You can donate to help the world heritage site of Stonehenge. Check out the UNESCO website for details.