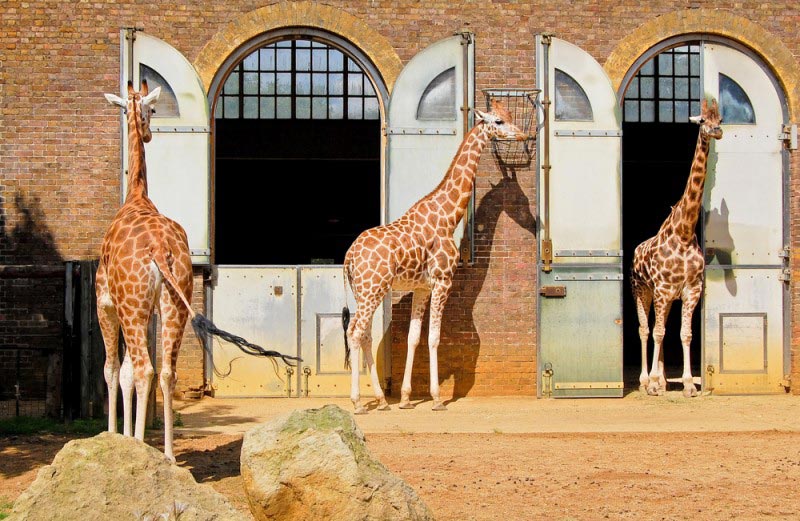 The London Zoo – Home to over 750 different animal species.

The London Zoo is quite old and has a bit of history. It was opened in the year 1828 and, at the time of inception, the zoo was the abode of exotic animals and renowned biological scientists and researchers carried out routine research with resident species.

With the passage of time, the London Zoo became one of the most famous zoos in the world and today has many firsts to its credit. It is the first zoo to introduce the reptile house, the first public aquarium, the first insect house and the first children’s zoo.

There are other zoos in Britain, but nothing matches the enormity of the London Zoo, both in terms of size as well as availability of animal species. A tour of London Zoo ideally begins with the exclusive primates enclosure, popularly referred to as the “Sobell Pavilion” which houses monkeys and apes. From squirrel monkeys to gorillas and macaques, the Sobell Pavilion is much preferred by the young ones. What will impress you about the Sobell Pavilion is the adequate amount of three-dimensional space that it provides to its residents as a result of which chimpanzees in particular seem to spend more time swinging.

The London Zoo aquarium is another notable point of attraction and some of the rarest of rare varieties of marine fish and other underwater creatures can be found here. The aquarium is in a long hall and it requires a staggering two hundred thousand gallons of both fresh water and seawater for hundreds of tanks.

Ever seen a poisonous viper? If not, drop in to the exclusive Reptile Enclosure. Apart from vipers, a bewildering variety of snakes and lizards are showcased here.

Then, there is the elephant pavilion and one most admit, the pavilion is not spacious enough. This may be one of the reasons why some of the elephants are taken out of their dingy backyard to the great outdoors of the zoo where they walk leisurely to the utter delight of the visitors.

The exclusive Rhino enclosure is worth visiting and the crowds just seem to love the new resident of this enclosure – Ben who hails from Dvur Kralove, Czechoslovakia. Just as exciting is the riveting Penguin’s pool, complete with concrete bridge.

Being a pioneering zoo, the London Zoo has earmarked an exclusive area for the children. Unlike most zoos, where not much thought is given to children, the London Zoo offers friendly animals like lambs, rabbits, piglets, etc to name just a few animals which they can touch and play with.

A visit to the London Zoo is incomplete without a glimpse of the chore pavilion. This enclosure is the abode of the mammals, regarded by many as one of finest collections of mammals anywhere in the world. The ground floor is meant exclusively for the daylight creatures, while the basement is meant for the nocturnal creatures like the Tasmanian devil and fruit bats. The Koalas and Pandas too have made their presence felt at the London Zoo.

All in all, a visit to the London Zoo is nothing short of fascinating. With as many as 750 animals species, some of which face the threat of extinction, a visit to the zoo is worth every penny you spend. 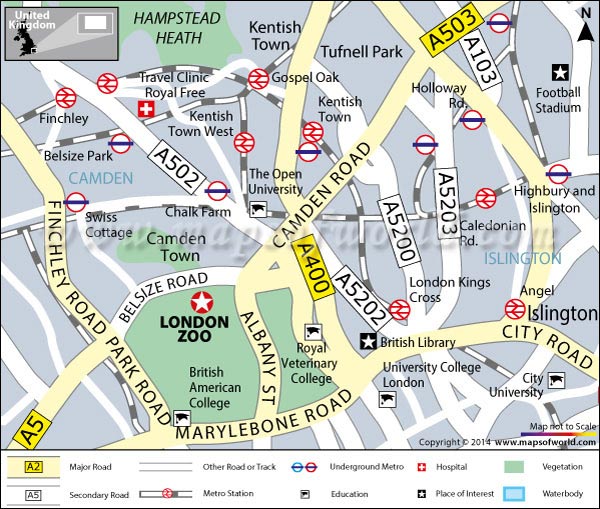 Where is London Zoo?

London Zoo is located right in the heart of the city, towards the Northern side of Regents’ Park. The zoo can be reached through various means of transport: bus, the tube and by rail. Nearest tube stations are Camden Town, Regent’s Park and Baker Street.

London Zoo is open every day of the year except on Christmas Day (25 December). Children under 16 will not be admitted without an adult. Opening times vary throughout the year. The London Zoo opening hours are from 10:00 am.