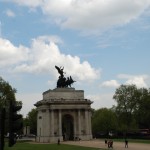 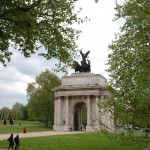 Wellington Arch which is also popularly referred to as the Constitution Arch is the creation of Decimus Burton. The magnificent monument is located at London’s Hyde Park corner and towards the end of Constitution Hill. The monument was built in honor of the Duke of Wellington and was erected way back in the year 1828 as a befitting memorial to Sir Arthur Wellesley who was the first Duke of Wellington and later was also appointed the Prime Minister.

The original statue depicted the Duke straddling over a horse. Nevertheless, in 1882, as part of the road extension scheme, the arch had to be moved to its existing abode at Hyde Park Corner. Today, the arch stands like a sentinel over the rather busy Hyde Park traffic island. In the year 1912 the statue was again replaced by a colossal bronze sculpture of “Wuadriga” by renowned artist Adrian Jones which till date is the largest bronze figurine in Britain. Today, the Wellington Arch is looked after by the English Heritage and the edifice has been fully renovated and restored.

A visit to the interiors of this grand edifice is a must for the first time visitor. There are three floors inside and houses a wide variety of exhibits, which highlights the many facets of this historic arch. In the past, the arch also housed a police station, which was among the smallest in London. On a clear sunny day, the breathtaking glimpses of the London Eye, Houses of Parliament and Buckingham Palace can be seen from the pinnacle. One great way to appreciate the beauty of the surroundings is to take leisurely walks around the beautifully landscaped Royal Parks. The arch itself has a marvelous exhibit – “Lived in London: Celebration of Blue Plaques”.

Many tourists are so overwhelmed with the grandeur of the Wellington Arch that they miss out on one of the most bizarre statues that one will ever come across, not only in London, but anywhere else in the world. In an obscure and shaded area is the remarkable statue of a dead soldier. 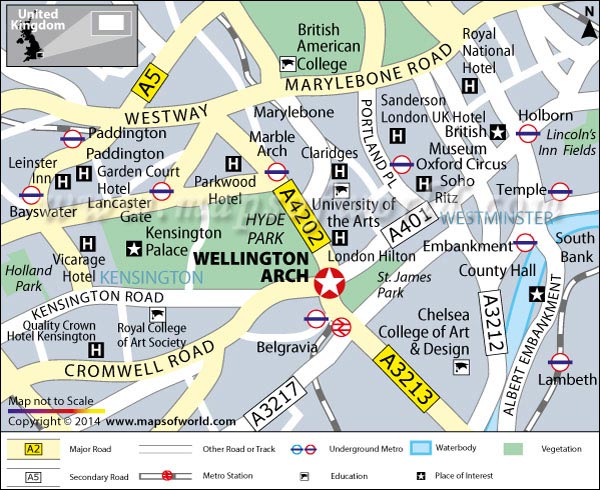 The exhibition highlights the historical past of Blue Plaques dating back to the year of its inception – 1866.

Where is Wellington Arch?

The Wellington Arch is located at the south of south of Hyde Park and at the western corner of Green Park in Central London.Hyde Park Corner is the nearest tube station for Wellington Arch.

If interested in the beautiful views that the Wellington Arch has got to offer, it is best to visit in the winter when the trees have shed their leaves and hence offer more spectacular sights. It is also a treat to see the monument lit up, hence evening is also a good time to visit.