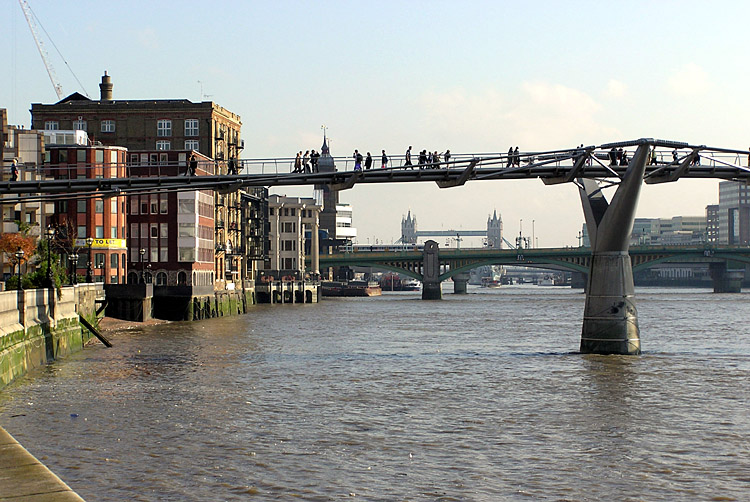 Millennium Bridge in London is an exclusive pedestrian bridge built across River Thames. It is the only pedestrian bridge in the world. Many even call it the “wobbly bridge” because it has the dubious distinction of having to close down within days of its opening.

Initially when the bridge was opened, thousands of people traversed the bridge and to the utter dismay of all concerned, the bridge began to produce a swaying movement and the authorities wisely closed down the bridge without wasting much time.

In eyes of many Britons the bridge along with the super flop – Millennium Dome is one of biggest architectural collapse of the new millennium. However, all is well that ends well, and today, the Millennium Bridge provides every pedestrian the liberty to walk leisurely without being bothered about traffic. From the middle of the bridge, one can enjoy a panoramic view of the city of London. The bridge has linked two of London’s renowned tourists sites – St. Paul’s Cathedral and the Tate Modern Art Gallery together.

This magnificent bridge has been designed by the renowned architectural firm – Foster and Partners. As you walk through the bridge, you will see “Y” frames along with cables, four on each side. The deck itself is very light and is 4 meters in width, which goes between the two cable sets. As far as lighting is concerned, the Millennium Bridge is one of the finest specimen of the judicious use of photo-cells to illuminate the entire bridge. No wonder, as dusk-descends on the city of London, the Millennium Bridge transforms into a great beam of light.

Where is Millennium Bridge?

The bridge is open year round. However, it would be best to see the Millennium Bridge illuminated in the evening.