The Tennessee Flag was adopted officially on 17th April, 1907 by the State Legislature of Tennessee. 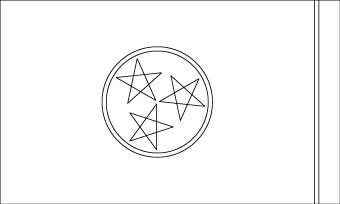 Download Picture of Blank Tennessee Flag For Kids to Color

The Tennessee Flag has a field of crimson red and a blue circle in its center bordered in white.Within the circle there are 3 white stars, each provided with 5 points. There is a narrow vertical stripe of blue on the flag’s left side and another thin white line on the inner side.

According to the designer of the Tennessee Flag, each symbol had a notable meaning. Firstly the colors on the flag are extremely significant. White, red and blue are the national colors of the US. White is a symbol of purity, blue stands for the patriotism of the people of Tennessee and red stands for the readiness of the people to shed blood during warfare. The 3 white stars symbolize the 3 disparate forms of land that divide the state. Thus in the east there are the mighty mountains or the Great Smoky Mountains, with the highlands running in the middle section, while the west is adorned with lowlands. They also denote that Tennessee was the 3rd state to merge with the Union after the 13 original states. These natural forms are shown within a blue circle, implying that they are connected together to form an inseparable and complete whole. The blue stripe was added to bring in a little variety to the single field of red.

The simple design of the Tennessee Flag is excellent for bringing into fore, the important geographical wealth of the state.

For flags of other states of the USA, check the Flags of the 50 States.

Latitude and Longitude Map of Tennessee