It is the capital municipality, industrial, financial and cultural hub of Romania and Capital City. 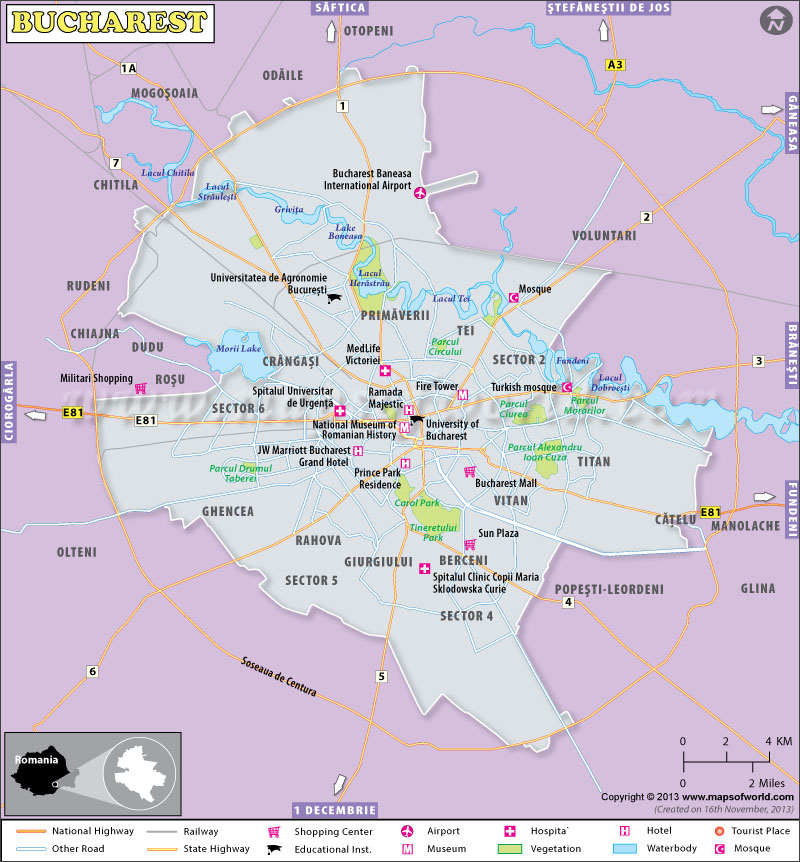 The nerve center of Romania, Bucharest, gets its name from the Romanian word for beautiful or joyful.

It is the largest city in Romania and the sixth largest in the European Union in terms of population. Bucharest is located in the southeast corner of Romania, on the banks of river Dambovita. The city has a population in excess of 2.0 million  Bucharest is also known as “Little Paris” for its elegant architecture and rich heritage.

According to the legends of the region, the city of Bucharest was established when a shepherd, Bucur, built a church on the banks of the River Dambovita River. It is commonly believed that the Geto-Dacians founded the earliest settlements here in about 70 BC. In 1459, Bucharest came into prominence as the royal residence and military bastion of the Wallachian Prince Vlad Ţepeş (The Impaler). It was then called the Citadel of București.

By 1700, Bucharest had become home to the culturally rich Wallachian Court. By the end of the 17th century, Bucharest was among the wealthiest cities on the continent. It also became the summer residence of the princely court of the Ottoman Empire. The Ottomans officially appointed Greek rulers to help in the administration of the town in the early 18th century, but a revolt led by the Tudor Vladimirescu in 1821, brought an end to the Greek rule in the town. In 1862, when Wallachia and Moldavia united to form the Principality of Romania, Bucharest became the capital due to its location on a prime trade route. Under Carol I, Bucharest officially proclaimed the capital of the new country called the Kingdom of Romania in 1881.

For almost a couple of years during World War I Bucharest was under German occupation. After World War I, Bucharest became the capital city of the larger country called Romania. During World War II, Bucharest was a major hub of the Axis Powers and it suffered much damage from bombings by the Allied forces. The 1940 earthquake also wrought much damage to the city. During the war, a major coup brought Romania into the Allied camp. Despite the short-lived Luftwaffe bombings, all major attempts by the Germans to conquer the city failed.

After World War II, communism was established in Romania, and the country grew as a socialist power under Nicolae Ceaușescu. While the 1977 earthquake ravaged the city, destroying much of its beauty, the Romanian Revolution of 1989 caused much political and social upheaval. The revolution led to the ousting of the communist government and the Ceaușescu who had assumed dictatorship. After 2000, Romania has been on the path to growth and development due to the economic reforms brought about by the democratically elected government.

The city enjoys a transitional climate, with both subtropical and continental influences. Winters are usually windy where the temperatures can drop to below 0°C. During summers, the city experiences an average temperature of 23°C, particularly during the months of July and August. Average humidity and precipitation are low in summers; however, the city does experience heavy storms occasionally.

The preferable time when you can plan for a Bucharest tour is from June to August. The city has a pleasurable climate then, with parks in full bloom.

The Sights and Sounds of Bucharest

A trip to Bucharest must include a visit to the Village Museum, known locally as the Muzeul Satului. This outdoor museum has more than 300 types of buildings that showcase the rich rural architecture of Romania. Most visitors are awed by the sheer vastness of the museum. A visit also provides insight into the history of the land and the culture of its people.

The Biserica Stravrapoleos, or the Stavropoleos Church, is a palatial church of Brancovenesc architecture, built in 1724. The church is like a piece of hidden treasure in an old town. The exteriors and interiors of this Romanian Orthodox church are well preserved and worth a visit.

Another palace to visit is the Mogosoaia Palace just outside the city of Bucharest. The palace is a wedding venue popular with both locals and tourists. The beautiful gardens, lake shores, and the palace itself is a great tourist attraction.

The Palatul Cotroceni, or Cotroceni Palace, is the official residence of the President of Romania and can be visited on certain days, called ”gates open day.” If you are lucky enough to be in Bucharest on such a day, don’t miss out.

The National Museum of Art is an ideal place for art buffs looking for a fuller picture of the history of art in Romania. The museum has a unique variety of religious paintings and the largest variations of the “Madonna and Child Jesus.” There are many other priceless masterpieces from famous artists like Grigorescu, Luchian, Brancusi, and Paciurea.

Next on the itinerary should be the Grigore Antipa National Museum of Natural History. Fully refurbished and modernized in 2011, this museum is a place to discover the history of our natural environment.

Set aside a day to visit the Palatul Poporului or the Parliament Palace. The palace is also the world’s largest civilian palace and was built as the official residence of the communist leader Nicolae Ceaușescu, but the dictator was overthrown and executed before the palace could be completed. It was later completed after the communist downfall and today hosts the Romanian Parliament. It also has space for exhibitions, fairs, and other public gatherings.

There are many opportunities to find souvenirs and trip mementos around Bucharest’s tourist attractions. The AFI Palace Cotroceni is Bucharest’s biggest shopping mall and also has an IMAX for exclusive movie screenings. The first real mega mall in Bucharest is Baneasa Shopping City. The Bucuresti Mall, the Liberty Center, the Plaza Romania, the Sun Plaza, and the Unirea Shopping Centre are the other major malls in the city.

Bucharest has plenty to offer in terms of nightlife. From trendy bars to Irish pubs, lounge clubs, and jazz clubs, Bucharest has it all. The Old Town, Lipscani, has been restructured as a nightlife strip and is packed with bars, pubs, nightclubs, and cafes. A few of the famous bars in the city are Atelier Mecanic, Beer O’Clock, Beraria Kovaci, English Bar, Golf Planet, and Interbelic. Live jazz performances are another good option: The Green Hours 22 Club Jazz Café and the Art Jazz Club are two of the most famous jazz clubs in Bucharest but do make a reservation before you go. Pack your bags and get ready for a visit to Bucharest and experience the essence of quintessential Eastern European living.