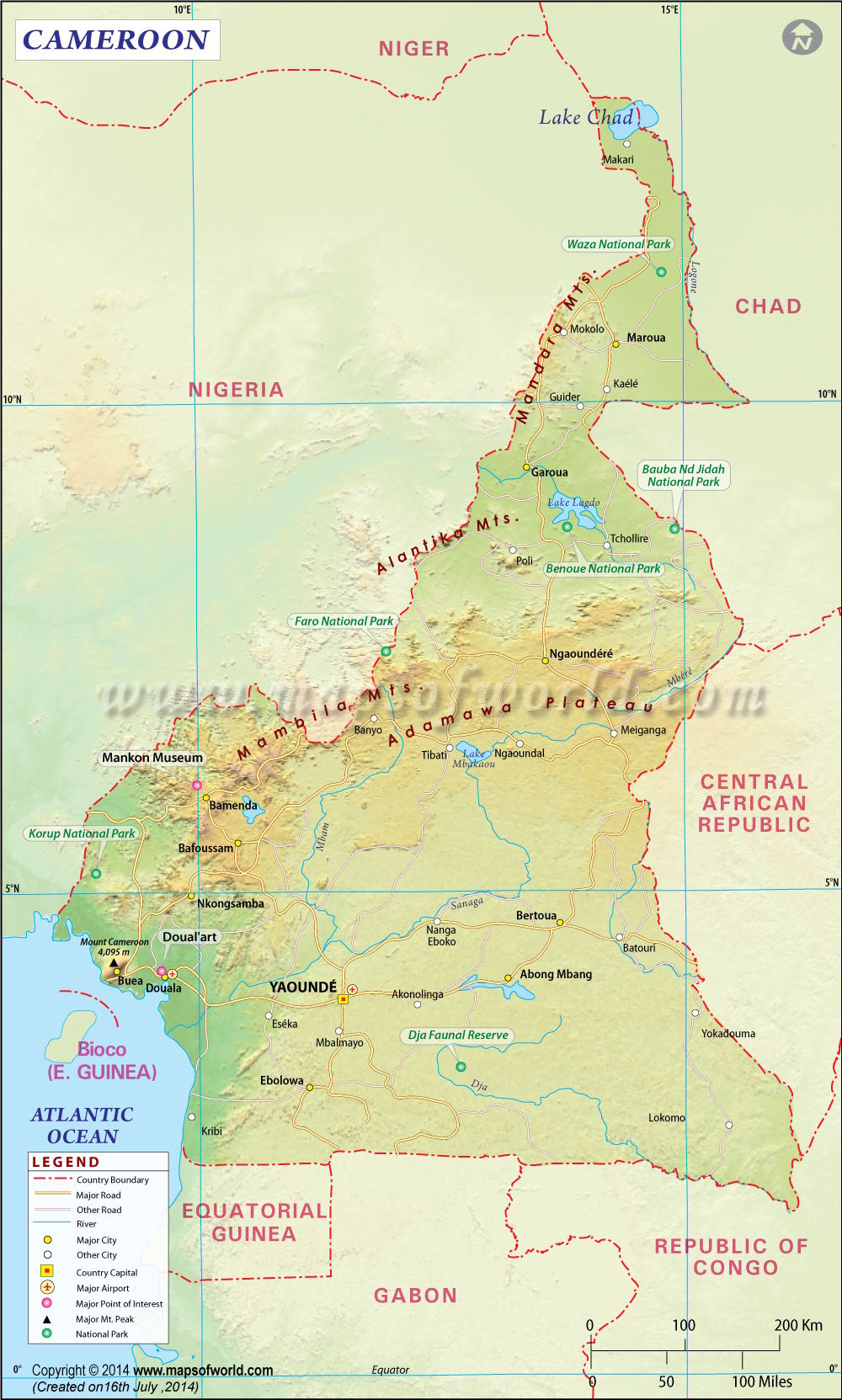 Explore this Cameroon Map to know everything you want to know. Learn about the location of this country in the world. Check out its geography, time zones, history, major cities, flag, capital, etc.

The Republic of Cameroon is a Central African nation that was historically divided under the rule of France and Britain after World War II. The history of Cameroon dates back to at least the 6th century BC when the Sao civilization covered much of the land around Lake Chad. European explorers arrived in Cameroon, beginning with the Portuguese in the 15th century. The country’s name came from the Portuguese word for shrimp, Camarões, because of the shrimp in its river.

Cameroon was colonized by Germany in 1884 and remained under German power until the end of World War I, when France and Britain divided control, despite calls for independence. French Cameroon gained independence first in 1960, and British Cameroon followed a year later, creating the Federal Republic of Cameroon. The name was changed to the United Republic of Cameroon in 1972 before dropping the “United” in 1984.

The Atlantic Ocean borders Cameroon at the Bight of Bonny in the Gulf of Guinea, Nigeria, Chad, Central African Republic, Equatorial Guinea, Gabon, and the Republic of the Congo.

Cameroon features diverse geographic features, including the beaches along the coast, mountains, deserts, rainforests, and savannas. The forests of the Cross-Sanaga-Bioko coastal plains are some of the wettest places in the world. The Cameroon mountain range features the country’s tallest mountain, Mount Cameroon, which stands 4,095 meters (13,435 feet) tall. These mountains are volcanic, with crater lakes. Here is Cameroon Physical Map showing all the physical features of the country.

The main rivers in Cameroon are Ntem, Nyong, Sanagaa, and Wouri, which drain into the Gulf of Guinea, and the Dja, Kadei, Benue, and Logone Rivers.

Douala is Cameroon’s largest city, with beaches, most popularly Limbe, where there are many great places to enjoy seafood. Other places to visit in Douala are the Douala Memorials, and La Pagode.

Cameroon has many options to experience and enjoy its diverse natural wonders, including Mount Cameroon, the highest in the country, and West Africa. Other places to see are Dja Faunal Reserve, the scenic but rugged Ring Road, and Ngoketunjia, where visitors can experience the culture of the native peoples, including the Bantu and the Fulani, in their villages.

Entry to Cameroon usually occurs via Douala International Airport. Around Douala, most people take shared taxis, which group various passengers who travel in the same direction. This option is standard and much cheaper than requesting a solo taxi. Chauffeurs are also familiar, though checkpoints requiring bribes are sometimes required.

Another option is to arrange a tour or a car rental, though many roads are unpaved. Buses and trains have service between major cities, though bus schedules are sporadic and can be unsafe depending on road and weather conditions, and trains are quite slow.