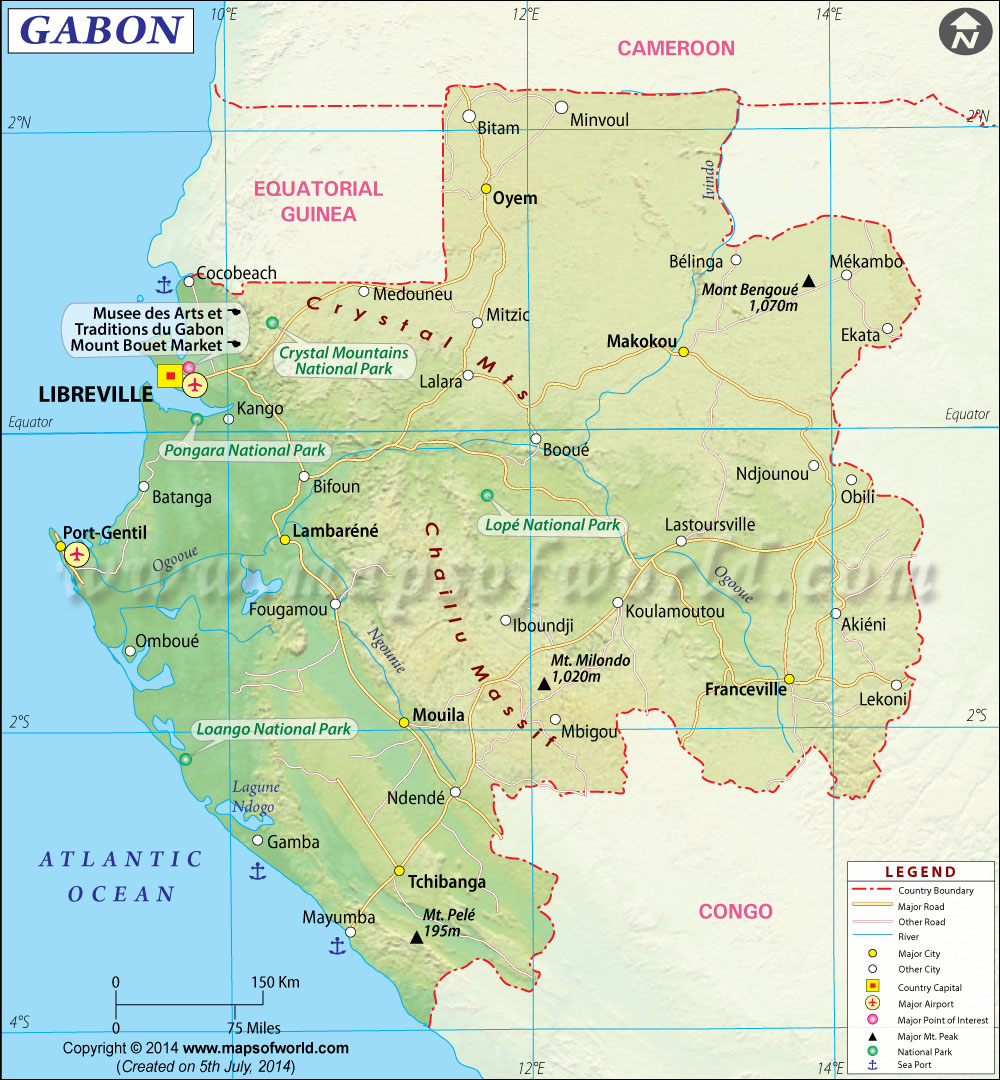 The Gabonese Republic is located on central Africa’s west coast, along the equator. Gabon’s early inhabitants were the Pygmies, followed by the arrival of the Bantu, and the groups mixed and migrated. European explorers arrived in Gabon sometime in the 15th century, beginning with the Portuguese who named Gabon from “Gabao,” a Portuguese word describing the cloak-like shape of the Komo River’s estuary.

Trade relations were strengthened by the 18th century Orungu kingdom, leading to ties with France. The French arrived around 1875, with explorer Pierre Savorgnan de Brazza, and Gabon became a French territory, as part of French Equatorial Africa in 1910, along with Chad, Cameroon, and the Congo. The territories of French Equatorial Africa gained independence in 1960, and Gabon came under the leadership of Leon M’ba. M’ba’s power led to a dictatorship and oppression of the people of Gabon. A military coup fought against this, but the French intervened to keep M’ba in power, and in a sense, to keep France in control with their influence. The leadership of M’ba lasted until his death in 1967, when he was replaced by his vice president, Omar Bongo Ondimba.

Despite general dissatisfaction with Bongo’s regime that included a revolution beginning in 1990, Bongo was continuously reelected until his death in 2009. In the following elections, there were 18 presidential candidates, but Omar Bongo’s son, Ali Bongo Ondimba was elected.

Gabon shares borders with Equatorial Guinea, Cameroon, Republic of the Congo, and has coastline on the Gulf of Guinea, which is in the Atlantic Ocean.

The terrain of Gabon features mountain ranges, eastern savannas, and the coastal region, which is largely covered in swampy mangroves and forests. In fact, 85% of Gabon’s land area is covered in lush jungles and rainforests. Gabon’s location along the equator gives the climate of a tropical rainforest, which is wet and hot year-round.

The main river in Gabon, Ogooue River, arcs across the entire country, with major tributaries including Ivindo and Mpassa. Its mouth is at Port Gentil, on the Atlantic Coast, and it originates in the Republic of the Congo. One of the major mountain ranges is the Crystal Mountains, which includes two national parks.

A large proportion of Gabon has been protected by the government and formed into national parks, which include Crystal Mountains National Park, Ivindo National Park, Lope National Park, Mayumba National Park, and Loango National Park. Loango is a popular destination among tourists, known for its pristine beaches and rainforests that are home to wildlife such as leopards and gorillas.

The capital, Libreville, offers a glimpse into life and culture in Gabon, with the seafront and other scenic destinations, and the town center with shopping, restaurants and nightlife.

Gabon has three main international airports in the capital, Libreville, along with Port-Gentil and Franceville. International service is mainly to other African nations and France. Getting around the country is usually managed by train or bus, though car travel is possible, not all the roads are well maintained. Taxis are available within the major cities, as are minibuses.