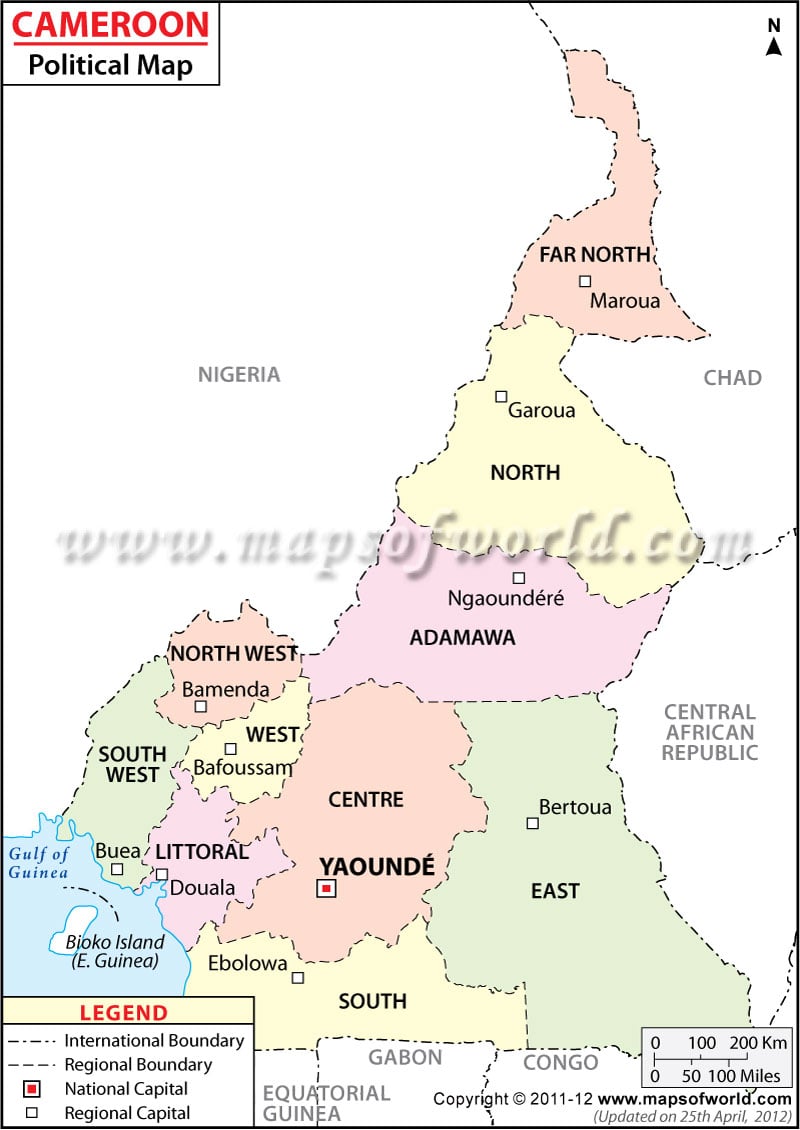 Cameroon political map shows important cities, the provinces, their capital and the borders of Cameroon. Yaounde is the national capital of the country. Some of the important cities of Cameroon are: Touboro, Fotokol, Dschang, Batouri, Moloundou and Mokolo. Central African Republic, Gabon and Republic of the Congo surround the country.

Cameroon is a country in Western Africa. Located between Nigeria and Equatorial Guinea, the country is bordered by the Bight of Biafra. It has a 402 km long coastline. Cameroon lies on the geographical coordinates of 6° North latitude and 12° East longitude. It covers an area of about 475,440 sq km. The highest point is Fako situated at a height of 4,095 meters and the lowest point is Atlantic Ocean.

helps to locate the important cities, locations, provincial capital, national capital as well as the boundaries of Cameroon.

The various provinces have been marked with different colors on Cameroon Map. These provinces include:

The provincial capitals are differentiated with small white shaped square boxes on World Map Cameroon. The provincial and international boundaries with black colored broken lines are also marked on the map.

Yaounde is the capital city of Cameroon. It has been shown on the Printable Map of Cameroon by a red colored square. The nearest airports to Yaounde are Yaounde and Yaounde Nsimalen. Yaounde lies on the geographical coordinates of 3° 52′ North latitude and 11° 31′ East longitude. It is situated at an elevation of 726 meters above sea level. Some of the nearest cities and towns include Mvolye, Melen, Ekoumdoum, Djoungolo, Mvan, Mokolo, Biting, Mbala and Mimboman.

Where is Cameroon Located