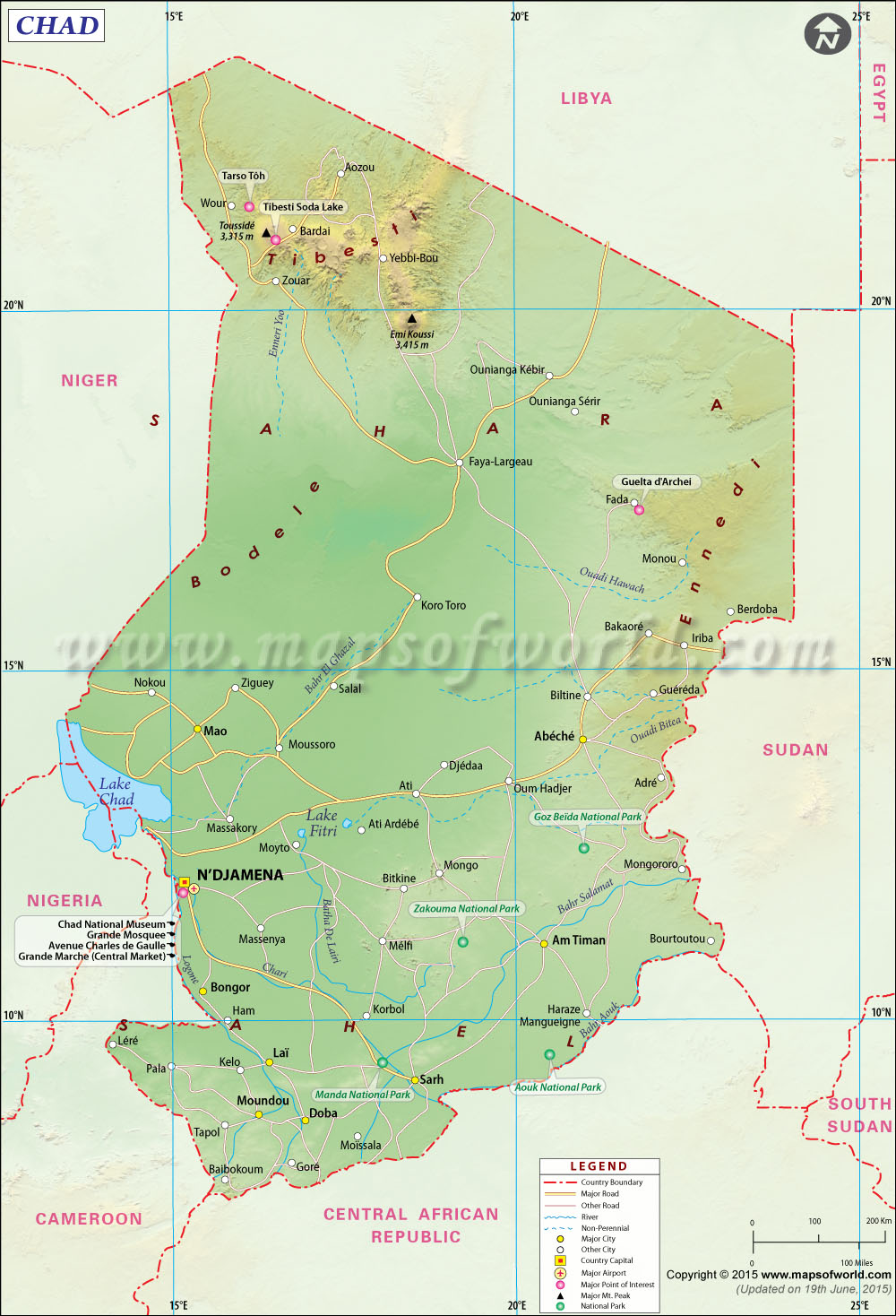 Officially known as the “Republic of Chad”, Chad is a landlocked country in Central Africa. The country is popularly referred to as “Dead Heart of Africa” due to its distance from the sea and its largely desert climate. Chad is bordered by Libya, Sudan, Central African Republic, Cameroon, Niger and Nigeria.

The region of present-day Chad had been inhabited for more than 2,000 years by sedentary and agricultural people. This was before the first known civilization established settlements.

The earliest civilization was that of the Sao, who were known for their artifacts and great oral histories. The Sao were conquered by the Kanem civilization, who accumulated wealth by controlling the trans-Saharan trade routes that passed in the region. The Kanem Empire was the first and the longest empire in Chad, lasting until the Europeans started to arrive.

France invaded the region in the early 1900s and in 1920, they gained full control of the colony. They incorporated Chad into the French Equatorial Africa. For many years, Chad was considered unimportant by the French and there was very little development.

After World War II, Chad was granted the status of a French overseas territory and achieved complete independence on August 11, 1960. François Tombalbaye was elected as the first president of Chad.

The President’s autocratic rule was met with defiance especially with the Muslims in the country and in 1965, a civil war broke out. In 1975, Tombalbaye was overthrown and killed.

Soon, the French’s control collapsed and Libya moved in and got involved in the war. In 1987, the leadership of the French-backed Chadian President Hissen Habre forced Libya out of the country.

Habre’s regime was filled with violence and corruption and in 1990, his general Idriss Deby overthrew him. Deby became President through national elections in 1996, and again in 2001, and after the term limits were lifted in 2005, he won again in 2006, and 2011. However, his regime has also been characterized by high corruption and extreme violations of human rights.

Chad is a landlocked country and is located in North Central Africa. It shares its borders with Libya to the north, Sudan to the east, the Central African Republic to the south, Cameroon to the southwest, and Niger and Nigeria to the west.

The country’s land area is divided into four bioclimate zones: the northern land area of the country consists of more than half of the total area, and it’s called the Saharan zone as it comprises a large part of the Saharan desert. The central zone is characterized by open savanna with moderate vegetation. The southern zone, or Sudanian zone consists of woodland savanna, and the Guinea zone receives the most amount of rainfall in the entire country.

Though the country is currently under the authoritarian regime of Idriss Deby, technically, the country works in the framework of a dominant-party presidential republic.

The President is elected by popular vote and serves a 5-year term. Since 2005, the limit of the number of terms has been lifted and by law, the President can stay in office for as many terms as possible.

The President has tremendous control over the government. Among his duties are appointing the Prime Minister and his Cabinet members. He exercises considerable influence over the three branches of government, as well as on the military, and the provincial officials.

Chad’s tourism industry is not a major contributor to its economy simply because the country has very little tourist infrastructure. Due to the nation’s constant political instability, countries send travel warnings to its citizens prompting them to avoid traveling to Chad. However, during more stable political conditions, the country has plenty to offer to tourists who want to explore natural wonders and virtually unexplored areas on the planet.

Chad is home to Lake Chad – one of the largest lakes in the world. The lake is also bordered by Niger, Nigeria, and Cameroon. It’s a great place to spot African wildlife such as hippos, waterfowls, and crocodiles. The nearby town of Bol has its own airstrip and camping areas are found here which cater to tourists.

The capital of N’djamena is the capital and economic center of Chad and the largest city of the country. It has a mix of rural and urban amenities such as hotels and small communities that still practice agriculture and fishing. It is home to mosques, cathedrals, the beaches. At night, the city comes alive with bars and clubs.

Chad’s literacy rate is 40.2%. Due to the country’s political landscape, the education system has been extremely neglected. Education has been very challenging in Chad because of the dispersed population, lack of school facilities, and unqualified teachers. Only about 36% of all school-age children enroll in school.