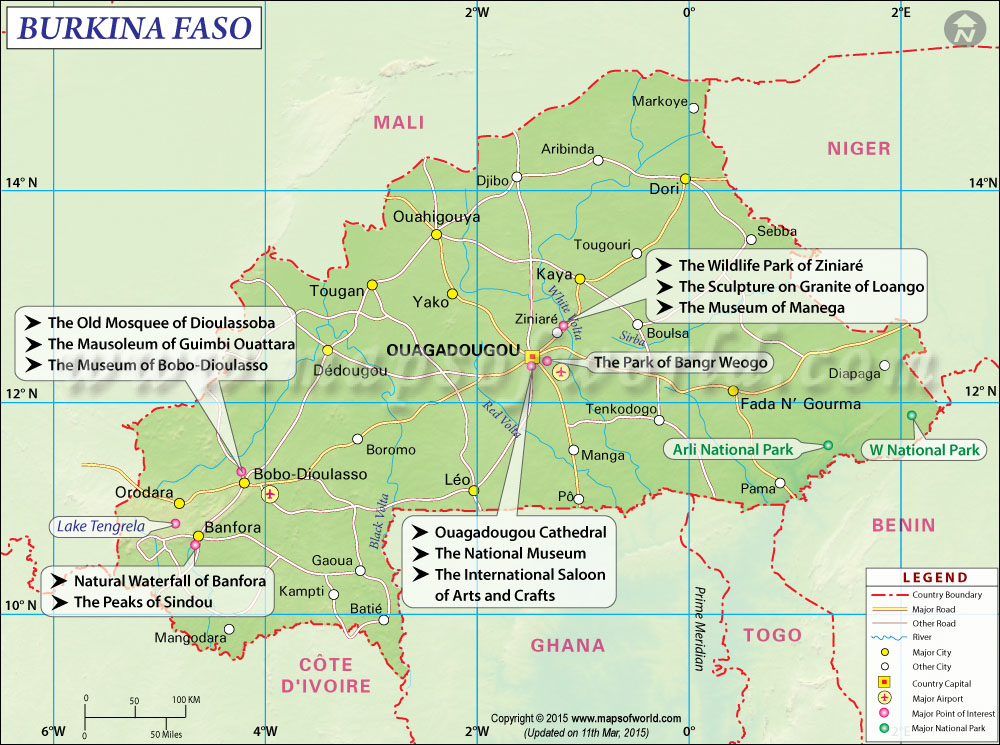 Originally inhabited by hunter-gatherer tribes as far back as 14,000 BC, Burkina Faso’s early indigenous people included the Bura civilization. Later, the land was occupied by the Dogon ethnic group in the 15th century, followed by the Mossi Kingdoms, including the Ouagadougou and the Yatenga, by the 16th century. The Mossi Kingdoms had control of the region, holding off the Muslim conquest, when the first Europeans arrived at the end of the 19th century. The first to reach Burkina Faso were the French, who were met with resistance. Despite their defenses, the region became part of French West Africa as the French Upper Volta in 1919, which was divided into two colonies in 1932.

The Upper Volta joined French West Africa on its own in 1947, soon becoming an autonomous republic of France in 1958. Upper Volta gained independence in 1960, but a military coup led to over two decades of unrest and conflict, with alternating civilian and military rule. The National Council for the Revolution was formed in 1983, and became the dominant power. Upper Volta became Burkina Faso in 1984, with Thomas Sankara, the leader of the National Council, as its leader.

During a 1987 military coup, Sankara was assassinated and replaced by Blaise Compaore, as part of the Popular Front. In 1991, Burkina Faso adopted a new constitution, which was amended in 2000. President Compaore was elected for his fourth consecutive term in 2010. The 2011 Burkina Faso uprising saw unrest and military mutiny, and the country has had conflict with nearby Ivory Coast and Sierra Leone.

Burkina Faso is a landlocked country in West Africa, situated in the Sahel region between the Sahara Desert and the Sudanian Savanna. Much of the country is located on a plateau, though there are low hills, and the highest point in Burkina Faso is Tena Kourou, which stands 749 meters (2,457 feet) above sea level.

The three main rivers that traverse Burkina Faso, Black Volta, White Volta, and Red Volta, lent the country its original name, Upper Volta. These rivers are also known as Mouhoun, Nakambe, and Nazinon, respectively. The Black Volta, along with the Komoe River are the two year-round rivers in the country. There are also several tributaries to the Niger that flow through Burkina Faso, including the Gorouol and the Goudebo. Significant lakes in Burkina Faso are Tingrela, Bam, and Dem.

Burkina Faso is a fairly undeveloped country in terms of tourism, though there are several important natural attractions, including game reserves like Arli National Park and Nazinga, which are home to a variety of wild animals such as lions, hippos, and elephants. Along the border with Niger and Benin is W National Park, a designated UNESCO World Heritage Site and home to many species, including cheetahs, leopards, and warthogs, as well as 350 types of birds, which are frequently viewed on safaris. Another UNESCO Site is at the Ruins of Loropeni, outside of Gaoua, which is the location of ancient ruins of an early civilization.

In the capital, Ouagadougou, there are also natural sites including the sacred forest of Bangre-Weoogo, where crocodiles live, as well as Jardin de l’amitie Ouaga-Loudun in the city center. Other city attractions are the National Museum, the monuments of La Place du Grand Lyon and Naba Koom, and the Central and Gounghin Markets.

Getting around Burkina Faso by bus is the best option for domestic transport, with decent roads between the cities. Car and taxi are a less desirable choice, but are still an option. Taxis are typically green and can be quite costly, and they may be shared with other passengers. Train service is available between the capital and Bobo, Banfora, and Abidjan.