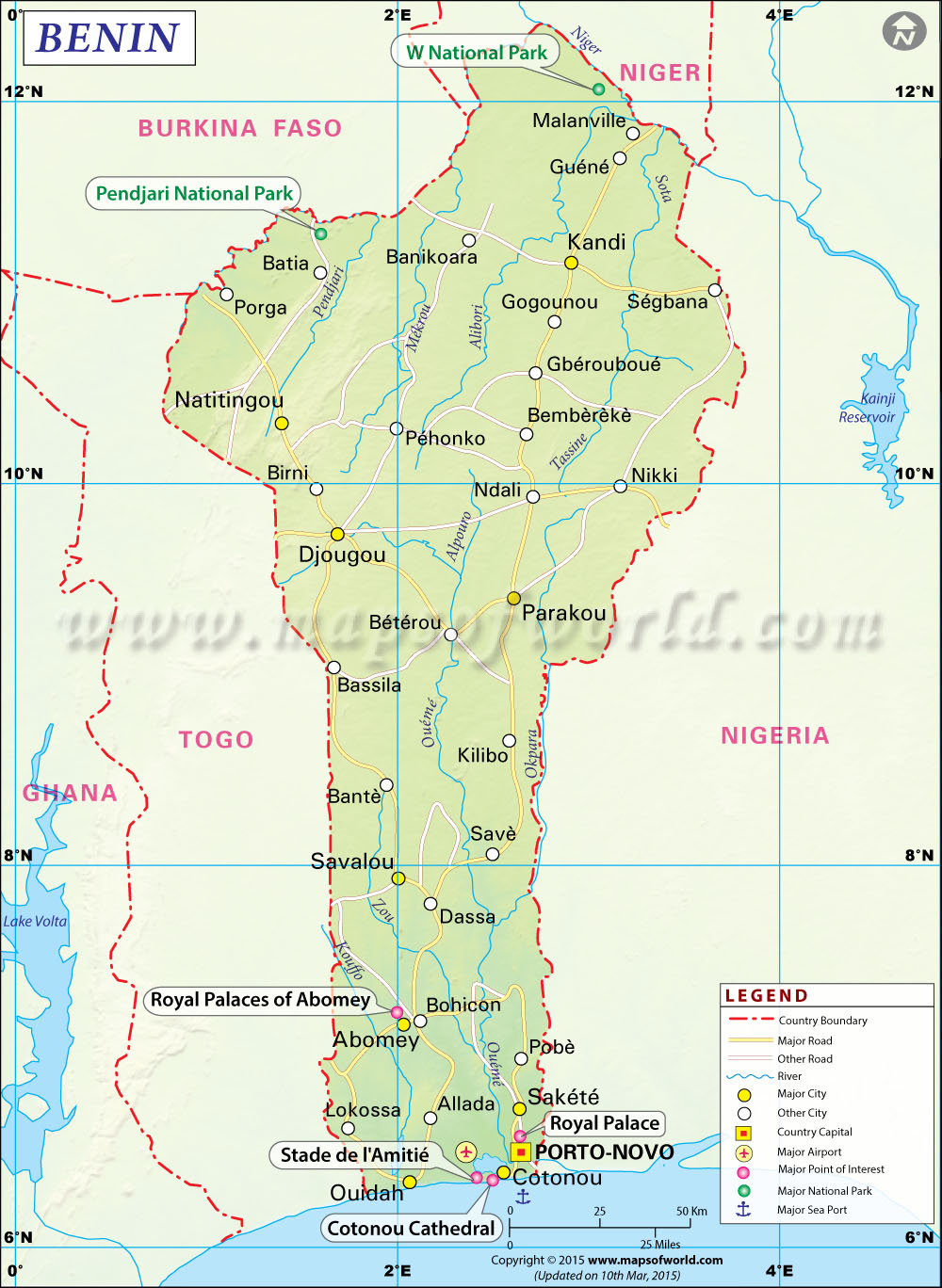 Explore this Benin Map to know everything you want to know. Learn about the location of this country in Africa. Check out its geography, history, major cities, flag, capital, etc.

Benin is one of the smallest and most densely populated countries in Africa. Benin was formerly one of the provinces of French West Africa until it gained independence in 1960. Benin is a narrow-shaped country, with the Niger River in the north and the Atlantic Ocean in its southern coastal region. The country’s terrain is mostly flat with some hills and mountains. 23.53% of the total land area is arable land, and 2.37% are permanent crops. The capital of Benin is Porto Novo.

Benin is located in West Africa and lies between latitudes 9° 30′ N and longitudes 2° 15′ E. To know more about the location, check Benin Latitude and Longitude Map.

The national flag of Benin has undergone modifications several times. It was first adopted on November 16, 1959, but was abandoned in 1975 upon the succession of the Marxist regime. The colors used in the flag are traditional Pan-African colors.

The Portuguese were the first Europeans to establish settlements in the region of present-day Benin. They built significant ports in the coastal areas, and soon, other European traders came, such as the French, Dutch, and British.

In the 16th century, Benin’s coast became the largest center of the slave trade in Africa, which was run by the Fon people, that ruled the region’s government. The region’s coast was soon known as the “Slave Coast.” The Fon people grew into prominence, building cities and accumulating wealth from the slave trade. As many as 10,000 slaves were sold to Europeans daily.

The Dahomey government and the Fon dominance collapsed in the 19th century when slavery was gradually abolished in European countries and in America. This also coincided with the French annexation in 1863. Dahomey leaders still retained a sense of power when they were sent to other French colonies in West Africa and appointed as leaders.

In 1960, the region gained independence, and its name was changed to Republique du Dahomey. The new government was met with many years of political unrest. In 12 years, the region changed governments nine times and went through 4 military coup d’etats.

The last of these coup d’etats and the most successful was in 1972 through the leadership of Major Mathieu Kerekou. The country’s name was then changed to the People’s Republic of Benin.

In 1989, in response to the country’s failing economy, the French government promised financial assistance in exchange for the Benin government moving from a single-party government to a multiparty republic.

In 1990, the country’s name was changed again, and this time, it became the Republic of Benin. The country’s first free elections were held in 1991.

Benin is located in the Sub-Saharan region of West Africa. Its borders are Togo to the west, Nigeria to the east, Burkina Faso and Niger to the north, and Bight of Benin to the south. Here is Benin Physical Map showing all the physical features of the country.

The judiciary branch of government is independent of the executive and legislative branches.

Benin is not one of the most popular Western African travel destinations, but it’s still a great country to visit. Traveling in the country is considered one of the safest in the region. The peak season is from December to February during the dry season.

You can have a safari adventure in Benin at the Pendjari National Park, located northwest of the country. It is a 2755 sq. km. area filled with African wildlife such as lions, buffaloes, elephants, and a wide variety of antelopes. The park is also well known for being a bird sanctuary.

The waters in the coastal regions of Benin are not ideal for swimming due to the rough seas, but they’re still a great place to spend an hour or two for their calmness and tranquility. The town of Grand Popo in the southwestern region of the country used to be a center for the slave trade. However, the area is half-deserted, and people depend on fishing and crafts for livelihood. The dark golden sand and wide beaches stretch to Lome in Togo, and several restaurants and bars can be found on the beach.

Ouidah is Voodoo’s spiritual home of Voodoo and if this religion interests you, this is the best place in the world to learn and understand the belief. There are Voodoo temples all around, and it is home to the Python Temple – which is the site of Benin’s ancient snake cult. Abomey was the capital of the Dahomey kingdom in its heyday, and it’s filled with ruined temples the royal palaces found here are UNESCO World Heritage Sites. The bas reliefs and the remaining structures provide evidence of the kingdom’s wealth brought about by the slave trade.

Benin’s literacy rate is among the lowest in the world. The national rate is 42.4%, where the rate for females is 30.3% and 55.2% for males. Before 2007, primary education was not free, but since the 2007 Education Forum, academic fees have been abolished.

Education is free and compulsory for students ages 6-11, and the school levels are divided into primary, junior high school, senior high school, bachelor’s, and master’s. There are over 90 higher learning institutions in Benin, and most schools use French as the language of instruction.