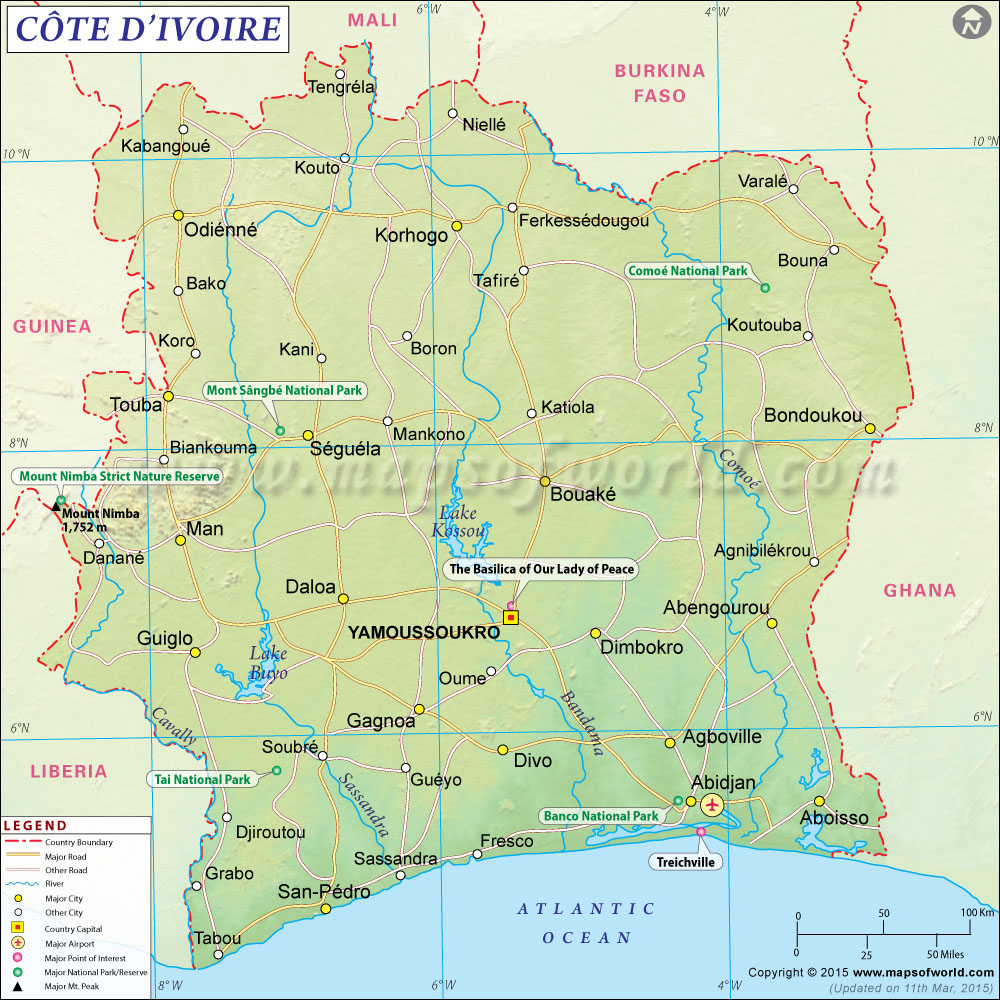 The indigenous people of Cote d’Ivoire included the Ehotile, Kotrowou, Ega, Dies, and Zehiri peoples. The Berbers of North Africa facilitated the trans-Saharan trade of salt, slaves, and gold, and the empires of Western Africa arose in the region. The religion of Islam spread during the migration of Arabs across Africa, reaching the region of Cote d’Ivoire by the 11th century.

Western Africa saw the rise of the Ghana Empire, reaching its peak in the 11th century, followed by the Mali Empire, lasting until the end of the 14th century. The Songhai Empire grew out of that, and spread across the region through the next centuries. Several empires existed in Cote d’Ivoire over the next centuries, including the Abron Empire, the Kong Empire, and Sanwi Kingdom.

The first contact with European explorers happened in the 15th century, with the Portuguese, who established trade with the people of West Africa. The French arrived soon after, establishing the Assinie mission. The ivory trade with the Portuguese and French led to the country’s name, which means Ivory Coast. The West African territories including Cote d’Ivoire became a French protectorate in 1843, establishing fortresses and trade centers. Cote d’Ivoire then became a French colony in 1893, exporting goods such as coffee and cocoa from the land. The French colonists faced resistance of the native groups, including the Wassoulou Empire. Cote d’Ivoire became part of the Federation of French West Africa in 1904, which included French colonies in Mauritania, Senegal, Mali, Guinea, Burkina Faso, Benin, and Niger. The union lasted until 1958 when Cote d’Ivoire became autonomous within the French Community, and the country became independent in 1960.

Since independence, Cote d’Ivoire has faced two civil wars caused by disputes over elections. The first began in 2002, with an uprising that caused many deaths, including civilians. The country was divided, and fighting lasted through to 2004 when a peace treaty was supposed to occur, but the rebels refused. A new peace agreement was signed in 2007 and new leadership was established. Another civil war broke out after the 2010 elections, with violence lasting through 2011.

The capital of Cote d’Ivoire, Yamoussoukro, is home to public gardens and the Presidential Palace, and a few architectural sites like the Baslilica of Our Lady of Peace, which is the largest Christian church in the world. Abidjan is the administrative and economic center of the country, as well as its largest, and is home to the National Museum, St. Paul’s Cathedral, and Bassam, its beautiful beach.

The main airport in Cote d’Ivoire is Felix-Houphouet Boigny Interational Airport outside of Abidjan, which offers service to destinations in Europe and West Africa. Car or bus is a good method of travel between Cote d’Ivoire and Ghana, but is not recommended for other neighboring countries as borders may be unsafe. Roads within Cote d’Ivoire are fairly good, and renting a car or hiring a taxi are good methods of getting around the country. Within cities, such as Abidjan, there are several bus routes that are inexpensive and regular. Boat is another option for a unique way to see the country.