Know where Burkina Faso is on the world map. It is located in West Africa and lies between latitudes 13° 0' N, and longitudes 2° 00' W. 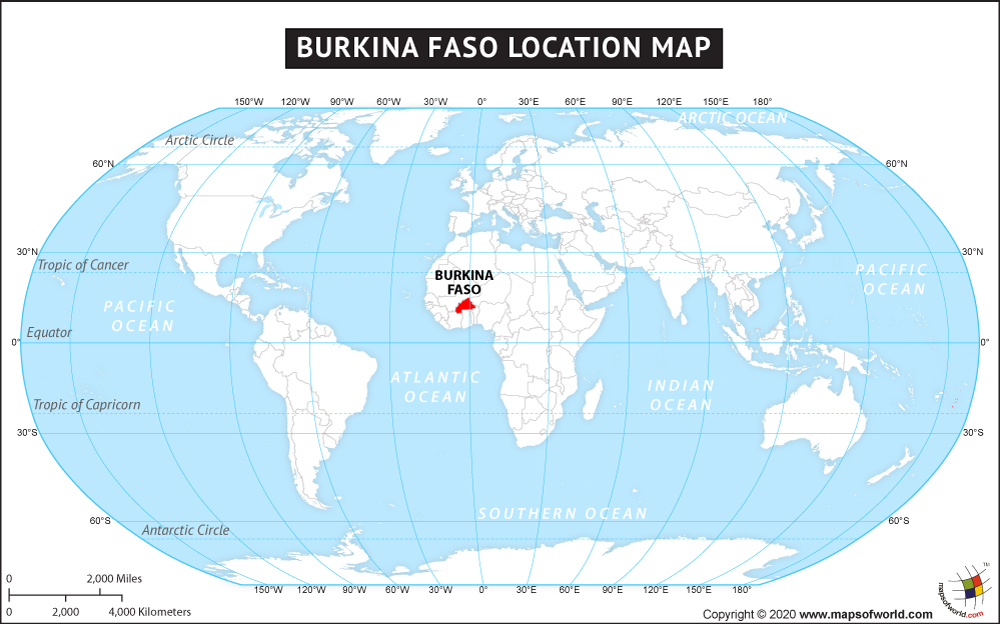 Description:Map showing the location of Burkina Faso on the World map.
0FacebookTwitterPinterestEmail

Where is Burkina Faso

Burkina Faso, the landlocked country of West Africa was formally called the Republic of Upper Volta. The country achieved independence in 1960 from France and in 1984 was renamed as Burkina Faso by the then president of the country Thomas Sankara. Burkina Faso shares its land boundary with six neighboring countries namely Niger in the east, Mali in the north, Togo and Ghana in the south, Benin in the southeast, and Ivory Coast in the southwest. Burkina Faso covers a total area of 274,200 sq. km. and is situated between 9° and 15°N latitudes and 6°W and 3°E longitudes. Ouagadougou is the capital and the largest city of the country, as well as its major economic center.

Burkina Faso has mostly flat and undulating plain terrain with some hills in the west and southeast part of the country. The country experiences a tropical climate with warm and dry winters and wet and hot summers. Economically the country is weak with one of the lowest GDPs in the world. But, Burkina Faso has a rich traditional artistic heritage, its literature is based on oral tradition and its craft attracts many tourists to this place.

The neighboring countries of Burkina Faso are: