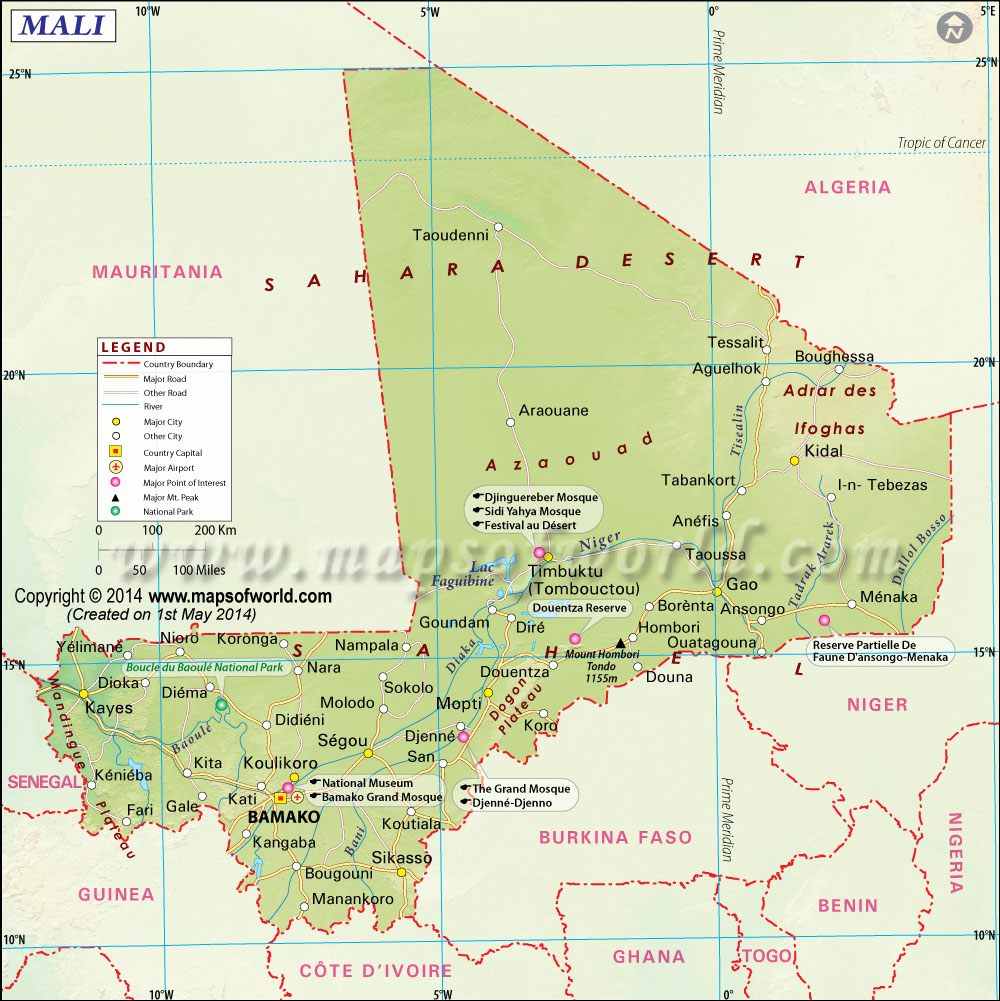 The Republic of Mali is a small West African nation with a very long history. Mali is currently at the center of armed conflict, which began in January 2012 with the insurgents declaring the northern part of the country Azawad, which they have declared new independent state. The Tuareg rebels have held their territory, and are supported by other extremist groups including Al Qaeda. and the conflict is ongoing despite attempts at peace treaties.

In its early history, Mali was part of the major West African empires that controlled the region. The Ghana Empire arose as early as the 5th century, rising to its height beginning around the 8th century, but declining in 1078. Its internal conflict led to its end in 1203, with the destruction of Koumbi Saleh. The Ghana Empire was succeeded by the Mali Empire, which gave the current Republic of Mali its name. The Mali Empire spanned much of West Africa, and lasted from around 1230 into the 16th century. As it grew weaker, the Songhai Empire rose up beginning around 1420. These were the three major empires of early West Africa. The Songhai Empire fell due to the rulers of the neighboring Saadi dynasty of Morocco, and Mali was broken up into many small kingdoms.

The French arrived in Mali and began colonizing around 1892. The French formed its colonies, with French Sudan and Senegal later becoming the Federation of Mali. The Republic of Mali achieved independence in 1960. Following independence, the country had many years of single-party rule, until it became a multiparty democracy in the 1990s.

Mali is located in the Sahara desert, which covers about 65 percent of the country and is hot and arid. Mali’s northern desert gives way to sandy rolling plains and subtropical savanna in the south. Africa’s longest river, the Niger River flows through Mali, creating a large fertile delta, characterized by lakes and floodplains. The other major river in Mali is the Senegal River, which is the country’s lowest point, with an elevation of 23 meters (75 feet). Mali has limited water resources as a landlocked nation located mostly in the desert. Here is Mali Physical Map showing all physical feature of the country.

In the Mopti Region of Mali, Mount Hombori is the country’s highest point, standing at an elevation of 1,153 meters (3,782 feet).

Mali has several points of historical importance, including archaeological sites and several UNESCO World Heritage Sites. One of these is Bandiagara Escarpment, home to impressive cliffs and ancient architecture. Also known as the Land of the Dogons, the site once served as a ceremonial place of ritual and tradition, and its caves served as a high burial ground, to protect the graves from floods. The Great Mosque of Djenne is another UNESCO site, located along the Bani River. Built along the 13th century, the ornately designed adobe mosque is one of the country’s best known landmarks. Other UNESCO sites located in Timbuktu are under insurgent control, and many of the landmarks have been destroyed, but the city is known for its historic buildings, mosques, and shrines.

Mali’s main airport is the Bamako-Senou International Airport, which is located in Bamako and offers service to other African countries as well as Europe. The country is also accessible by train, which offers transportation across the region of West Africa. Buses are available for certain long-distance routes, including from the capital to Segou. The country does have paved roads between urban areas and inside cities, but outside of cities the roads are not well maintained. In urban areas, there are many taxis and even more motorcycles, especially in the capital.