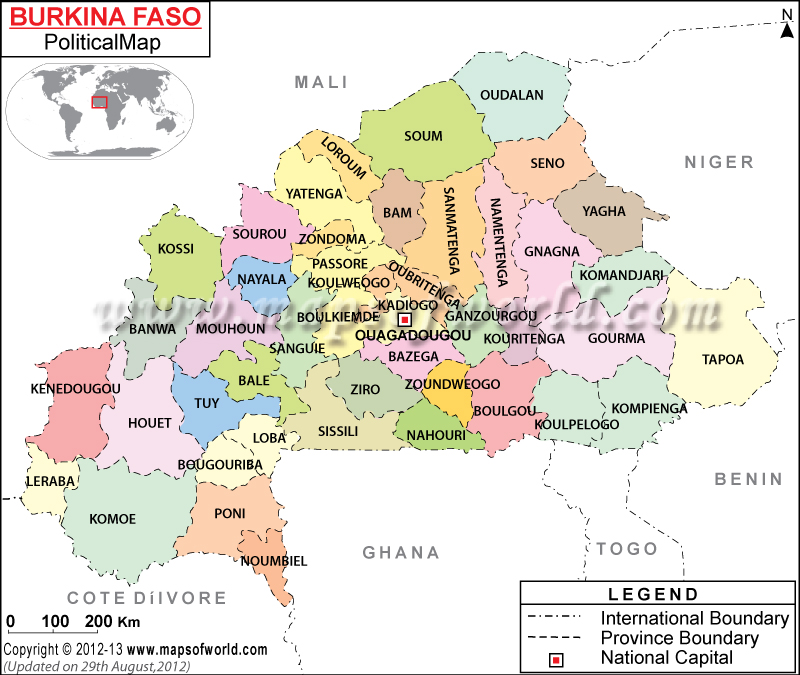 Burkina Faso is a landlocked country in West Africa. It covers a total area of 105,900 square miles. The country has an estimated population of more than 15,757,000. As shown in the political map of Burkina Faso, the country shares borders with six countries. The country is bordered by Mali to the north, Niger to the east, Benin to the south-east, Togo and Ghana to the south, and Cote d’Ivoire to the south-west.

The national capital, Ouagadougou is indicated on the map with a red circle enclosed in a square. It serves as the administrative, cultural, and economic center of the nation. with an estimated population of 1,475,223, Ouagadougou is also the largest city in the country.

The Burkina Faso Political Map highlights the major cities, regions, and other political divisions of the country. The provincial and international boundaries of the nation are also shown on the map.

Burkina Faso is divided into thirteen regions. The regions are:

Burkina Faso is a semi-presidential republic wherein the President is both the head of state and the government. Blaise Compaore is the current President of the nation. Luc-Adolphe Tiao is the Prime Minister.

Burkina Faso is one of the very poorest nations in the world. Agriculture is the mainstay of the economy accounting for 32% of its gross domestic product. Sorghum, pearl millet, maize, rice, and cotton are the major crops. France, Togo, China, Singapore, Thailand, and Ghana are the major trade partners.